When it comes to musical talent on the East Coast and in the Miami
Florida area there is no shortage of great names and talent. Now with
a second album being recorded in the studio and a first one climbing in
popularity on iTunes local Miami based guitarist Al Lojack is now begining
to pick up a series fan base around the country and around the world. 
The South Beach Resident Al Lojack is a mix of wicked, creative guitar riffs,
feel good lyrics and musical themes most listeners can identify with.

But musical themes come easy for Al. He grew up along the beaches of Miami,
surrounded by beach balls, beautiful women and the good life.

His "inspiration comes from the chaos that lives within,” Lojack says of his
fast life. “I’m a volcano. When I’m in my guitar room and I’m looking at the wall,
everything is a fantasy.”

Lojack's early guitar influences were the Allman Brothers, Jeff Beck, and Jimi Hendrix.
"Their music reached me in a spiritual and emotional level which I refer to as the
"feel good effect.” This experience creeps up on me with many other musicians and
groups. It seems to be my spirit's response to the diverse creativity of many musicians
since my early days."

Lojack has assembled a production team that’s ready to take his Miami-based rhythms
to the Grammy’s. It's time, says Lojack. "Anonymity is just not me.", Lojack concluded
as he wrapped up another interview before looking at finishing his second album and
looking at a future tour around the USA in late 2013 and early 2014.

For more information on Miami South Beaches fast growing lead guitarist and
musical talent visit his website and iTunes pages for some of the hottest music and sounds to
come out of Florida in the last 10 years! 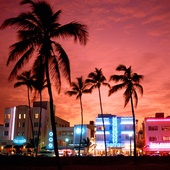