I spoke with the author of this article, Zeke Pipher, from Nebraska and asked his permission to share it with you all.  This is all about priorities and what is ultimately important in your life.  This article really hit home with me and I hope that it helps you. I really could have stopped after the second sentence; you'd get the drift.  This article came from Petersen's Bowhunting.  Zeke's Website is right here.  Please read.

An accomplished sportsman from our community left this world a couple years ago. He died a slow, uncomfortable death, but not because of the lung cancer; it was his conscience that pained him most. I visited Dale a few times as he transitioned from this life to the next. We would sit in the living room of his apartment, looking out across an open cornfield. He'd settle his small, bony frame into an overstuffed leather recliner and I'd sit a few feet away in a folding chair. Each time we met, Dale brought up two topics. He always wanted to talk about hunting. He had a photo album sitting on his coffee table that had the word "MEMORIES" stitched onto the front. Its pages were yellow and tattered and filled with pictures of Dale standing beside various bucks. Some were hanging from meat poles, others were on the ground and a few were propped in the back of his 1963 Ford pickup. They were all nice deer, and it wasn't hard to picture how exciting those moments must have been for him.

Hunting was always the first subject; we'd spend about 30 minutes talking about his favorite outdoor moments. But then, inevitably, the second topic would rear its ugly head. The expression on Dale's face would change. In fact, the entire atmosphere in that apartment seemed to transform and begin to feel heavy as Dale would stop smiling and begin looking down at the floor. Dale wasn't the type of man who cried easily, but when we launched in on the second topic, he usually shed a few tears.

The second subject? His regrets. The first time we met, Dale transitioned from the first subject to the second by stating, "You know, Pastor, I don't know why I talk about hunting so much. It ruined everything for me." The last six months of Dale's life were spent fighting off demons. He didn't have any close friends. He was estranged from his children. And he'd been divorced from two wives. One wife told him as she walked out the door: "I'm gone! I'm tired of playing second fiddle to your true love." One afternoon, as I was flipping through the album, I asked him about another hunter in a photo. Dale explained how the guy was just a recreation buddy. "That's all I've ever had ... guys to fish and hunt with." Watching Dale die with a photo album full of trophies and a heart aching with regret had an impact on me. In fact, the Monday following his funeral, I woke up at 5 in the morning and decided to write a book about the subject. Dale's story sobered me. I've met few people who share my passion for bowhunting to the same degree. When I pick up a new hobby, I go ALL IN. It's not hard for me to imagine chasing my hobbies to the point of messing up my deeper priorities. I walked away from Dale's funeral convinced there are few things in life more tragic than when a man reaches the end of his life only to realize he chased thewrong things. We only get one go-round in this life; it's worth doing right. Climbing Down In the past few years, I've realized my enjoyment of the outdoors is directly related to the state of my conscience. It can be the nastiest day outside--screaming, bone-freezing, sub-zero winds that are squelching deer movement--and if I left home with my marriage, parenting and friendships in tact, I have a good time outdoors. Likewise, it can be the crispest, bluest-sky day in the middle of the rut--when bucks are on their feet chasing does--and if my priorities are out of whack, there's a cloud over the entire day. I've learned this lesson the hard way I've crossed that line before. In fact, my conscience nagged at me so doggedly once, I did something I'd never done before: I climbed out of the stand early and went home. I'd already been out twice that week, which for me personally is the upper limit. As a husband, father, writer and pastor, heading to the woods three times in one week was over the top. Yet, at three o'clock, for the third time in four days, I sat catching my breath, harnessed 22 feet up my favorite pin oak. As I scanned the familiar canopy it struck me that I wasn't feeling my usual sense of exhilaration. Normally, I spend the first few moments in a stand dreaming of approaching deer, well-placed shots and recounting the story to friends. Yet, all I could picture that afternoon was how my three kids would wake up from their naps to find daddy gone--again. I imagined them busying themselves with toys, asking mom why I wasn't around to wrestle, read or build "sky-skapers" with Legos. The feelings of guilt were so intense; they felt like tiny fists hammering on my conscience. The sense of shame settled even thicker overhead as I considered Jamie. While I sat in the serenest of settings, she was racing around the house cleaning up toys, changing diapers and trying to throw together a dinner for five. Jamie is a generous wife--I've never met a more giving person. She's happy to give me "tree-time" and lets me go on a few out-of-state hunts a year. But that week, I knew it in my gut; I'd taken advantage of her.

The little fists hammered harder. So, I did what I'd never done before--I climbed down early and went home. After helping my wife recover from the shock of seeing me walk through the front door early, I wrestled with the kids, made dinner and had a great night at home. I never looked back or wondered what I might have seen if I'd stayed outdoors. Zero regrets that day! Zero Regret Bowhunting If you're reading this magazine, it's safe to say you share my passion for bowhunting. I have dozens of hobbies, passions and pursuits; but when it comes to recreation, nothing competes with bowhunting. I can't say enough about the sport that has given me challenging adventures, quiet times of reflection and rich times with family and friends. I don't write for this magazine for the money; I do it to celebrate this great sport. That being said, even something as potentially exciting and meaningful as bowhunting can turn toxic if we let it out-compete our deeper valties and priorities. I don't want that for you or me. Here are some suggestions for how to suck the marrow from bowhunting this season without creating memories you'll regret. Recruit Your Spouse: You'll be surprised how willing your wife or husband will be to help you consider priorities. After I climbed down early from the stand and went home that day, I asked Jamie to talk with me about my priorities. I told her I didn't want to commit any huge, conscience-searing mistakes, and that I needed her help. She didn't nag me. She didn't take advantage of my request for feedback. She didn't attempt to make my decisions for me. She simply asked me questions regarding how well I feel I do in our marriage, as a father, or at keeping up with my work/ministry. She got me talking, and I came to many of my conclusions through the questions she asked me. Communicating with your spouse is vital in forming a vision for maintaining balance. One thing that has worked well for Jamie and I over the past few years is discussing what I can do to give her time away. She doesn't have a hobby or outdoor pursuit that she feels a strong desire to chase. But she does love to go out for coffee sans kids and enjoy some time alone to read and write. Duringarchery season, we'll sit down and plan our schedules. I'll make sure she has one or two times to get away and enjoy her own adventure. This has helped us maintain balance in the marriage. Call in the Troops: I have two bowhunting friends I talk with every week, Jeff and RB. During archery season we call each other after every time afield. We not only ask each other how the hunt went; we ask how each other are doing in this area of balance. These guys care about my life--my marriage, parenting, work and friendships--and they'll gently get in my face if they suspect I'm not living up to my expectations for myself. Strong friendships are utterly vital toward walking the path of an intentional, well-balanced life. Keep a "Conscience" Journal: Many bowhunters I know only journal information such as deer sightings, treestand locations and weather patterns. Let me suggest, however, that if you're struggling with balancing your priorities, one of the best ways you can help yourself is to write down your thoughts and reflections after each outing. Then, at the end of the season, read back through this journal and ask questions such as: * Is this who I want to be next year? * Was this past season balanced? * How do I want to change my schedule and priorities next year? * How did I feel when I wrapped my hands around that nice buck? How did my conscience either help or hurt those "success" moments? Happy Hunting! You're heading into what could be the best bowhunting season of your life. And you might not even punch a tag. Vincent Van Gogh said, "Conscience is a man's compass." Those are apt words. If you set your compass to keeping the right things in sight this year, you'll find exhilaration and satisfaction outside, whether or not you wrap your hands around a big set of antlers. There is such a thing as zero regret bowhunting. Let's enjoy it together this year. 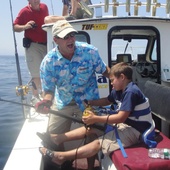