Side walk Repairs...I think that's a little out of my league. I'm a contractor and as such I wear many different hats or hard hats as the case may be. When I got a call to repair a side walk I really tried my hardest to get out of it. The thought of all that paperwork was daunting to say the least. Plans, permits, bonds, additional insurance etc. I just wanted no part of it.

The client kept calling asking me to just take a look at it. Finally I gave in, after all...looking can't hurt. I'm not committing to anything by simply looking. Well it turns out that this was a pretty easy fix after all.

Most of the sidewalks in the area were made from thick pieces of slate. As the pieces became damaged  homeowners replaced them with concrete. Not only was this not a poured concrete sidewalk, it wasn't even damaged.

The city planted all these trees along the edge of the sidewalk not taking inot consideration that as the trees grew the roots would spread and cause damage to the sidewalk. When it came time for the homeowner to renew his insurance the adjuster said: "Not so fast, not until that trip hazard is corrected. For this homeowner this was an easy fix. Lift the slab, dig around and remove the root section, seal the cut areas to prevent insect infestation and it's done. 3 hours, a few hundred dollars and the problem is solved.

So the roots only effected that one piece? Great that it was a simple fix though!

We have the same kind of root issues with many of the brick sidewalks in our community.

Roy, This seems to be an ongoing problem with these tree roots. Everyone wants tree lined sidewalks, but very little thought was given to the nature of the trees roots and the needs of the different variety of root structures. Usually the home owner or the business owner has to bare the price for the repairs. 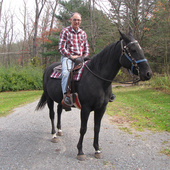 I want to provide my readers with some idea of who I am, what I do and the services my company has to offer. I will post articles on home repairs and periodic home maintenance. From time to time I will post some articles of personal interest.