I know i've been largely absent in these parts, but felt like I should share this. For those of you who don't know, Jon is my dad. And that's basically our story.

Today is March 5, 2013. By middle of the day, I couldn’t resist the temptation and asked my wife whether there was any significance in this date. She thought for a moment and then said that she could not remember anything, so she assumed that there was nothing worth remembering…

60 years ago today the Father of Peoples Joseph Stalin died. I was 2 years old, so no recollection of the event. My mom told me that she was crying. Actually, the whole huge country was crying. People were scared. They were afraid that something very bad would be happening to them, to the country…

It is hard to understand how the People devastated by terror, were so loyal and devoted to the tyrant, but hey, don’t dogs lick the beating hand? And don't beaten children hug their abusers?

Did Stalin's death have anything to do with me?

It did. It did big time.

60 years ago like so many other Jews in the Soviet Union, we were waiting for the exile to Siberia. My parents were fired a few days before… We had suitcases (1 small suitcase per person) ready and were waiting for the order to border a special train. My dad, my mom, my 9-year old brother and me…

Now, many years later I know that Stalin's order was that only 20% of all Jews sent to Birobidjan in Russian Far East were supposed to make it there alive, and the rest of them were to be stopped in the remote areas on their long journey through Siberia and shot by soldiers.

Would we have made it?

And this is the best thing that could happen.

60 years ago nobody could even dream about it. That their lives are their lives, and they are not worthless pawns in the hand of a tyrant.

It was ages ago… it was just yesterday.

I can afford not remembering it now... but I do.

I am celebrating his death...

Photo by snowlepard via Flickr.com

Oh wow...yes I can see why he is celebrating his death even more than the rest of us.

I did not know Jon was your dad ..You are a lucky lady . Jon is one of my favorite bloggers .He reminds me of a lady Lily that I work  .She is also from Russia . I have the deepest respect for them both .I love to listen to her talk .I also love to read your father's posts . Lucky lucky lady to have a wonderful father to love . I think you do know this .

Have a great day and enjoy life !

Like
Bruce Walter
Keller Williams Realty Lafayette/West Lafayette, Indiana - West Lafayette, IN
Inna, I read this earlier on your dad's blog, and yes your readers will be glad you re blogged it. Hope all is well with you and your family-especially the kiddos!
Like
Inna Ivchenko
Barcode Properties - Encino, CA
Realtor® • GRI • HAFA • PSC Calabasas CA

It is great to work as a team.

Jon is surely very proud of you. 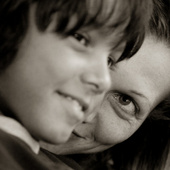 Marketing Services For Real Estate: website design, real estate wordpress sites, facebook business pages and much more. With a dash of humor and life as I see it.

Sign up for our print store specials and save 20%-50% on business cards, postcards of flyers:Sing up here