My 2nd day this week in the South Sound... I'm here for meetings in Tacoma and Fife with my friend and coworker Cathi Mahan. Our first meeting was up on 6th Avenue at the top of the hill near the Narrows Bridge. You know me, not one to miss a photo opp, let's take a quick spin down the hill to Titlow Park on Puget Sound so I can take a few photos. 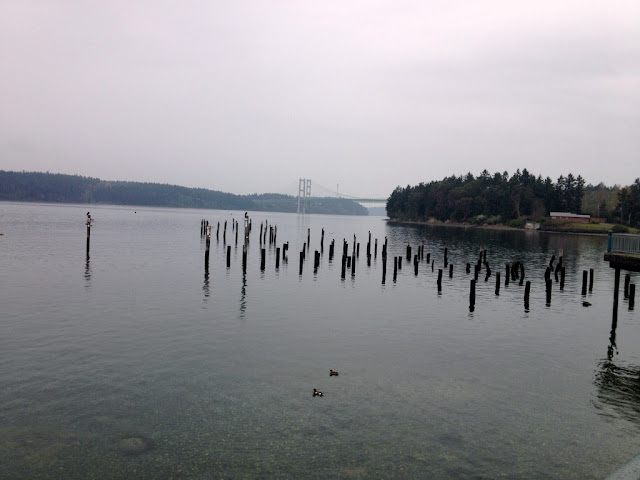 The pilings are from an old ferry terminal.

The park is named after Aaron R. Titlow who came to Tacoma in 1888. He was just out of law school and decided his opportunities might be greater out west in the Washington Territory instead of setting up practice in his home State of Ohio. His timing couldn't have been better, Washington became a state the next year on November 11, 1889 and life was booming in the City of Tacoma. 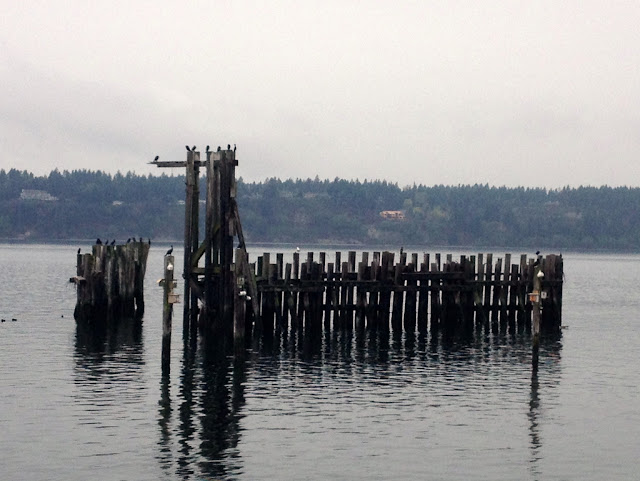 Needless to say, Titlow did very well with his real estate holdings and in 1903 he purchased 30 acres of the Wilton land claim on Puget Sound in Tacoma's west end. Titlow died in 1923 and the land was purchased by the Metro Parks of Tacoma in 1926.

We didn't stay long, but I did have a few minutes to take several photos. These 3 were my favorites. 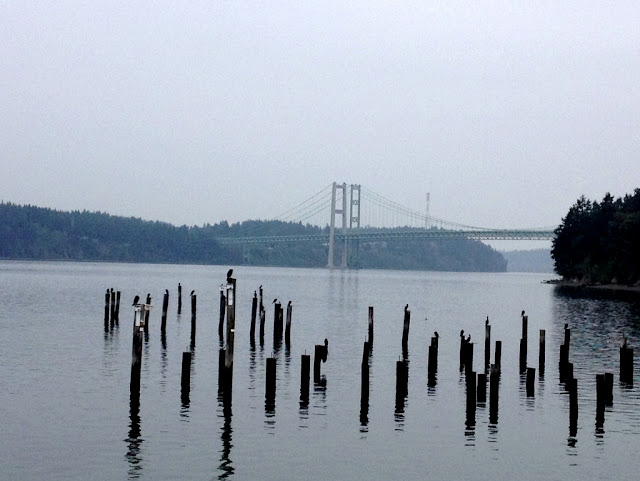 That's the Tacoma Narrows Bridge in the background. This is just a stone's throw from an earlier post I did back in February about Boathouse 19. Even on a rainy day, it's beautiful place.

A little more about Titlow Park...

Titlow is a great park. Love the lodge. And I agree. Even on a rainy day it's still beautiful.

Thanks for the interesting local history. Most of us wish that we had purchased more real estate during our years of professional life.

Hi Debi... Me too, the lodge is a wonderful building. I did a little research and found out it was originally built as a 3 story luxury Hotel Hesperides (named for his 3 young daughters at the time) in 1911.

Roy: Thanks, I love local history. I was unaware of Mr. Titlow until after I took the photos and was curious about how the park got its name. Agreed, no matter the price, I can think of several opportunities to buy property many years ago, and I wish I would have!

Those old ancient pilings lay testament to the history you reveal in your writings, Rene'. . .Wonderful stuff!  I hope you have a superb weekend!

Rene, That is a great bit of history!  Those are some great photos, very beautiful area!  Have a great day!

Thanks Myrl... and those old pilings go pretty deep.

Darcy: Proof positive it can be worth it when you're working on a project and you go down a few rabbit holes along the way! Enjoy the day.

Hi René,  Nice post on Titlow Beach.  I'm doing a bit of research on the area and posted some of it on my blog, http://citiestownsandotherplaces.com.  I provided a link to this post.