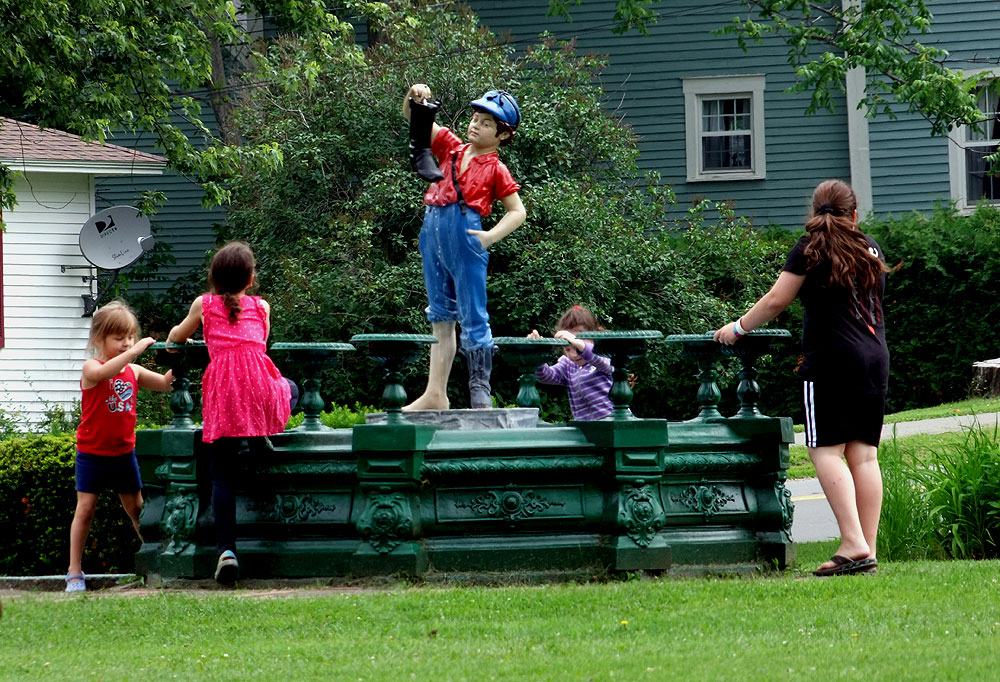 Okay, before you think of major league franchise owner, let's set the record straight from up here in Maine.

We're talking little league franchise owner!  Back in 1980, there were 12 little league teams with sponsors in Houlton Maine.  I always thought it would be neat to sponsor one but the slots were full.  So I asked to be on a waiting list.  Well low and behold, one local team, Shop N Save decided that the little leaguers should earn the money for their uniforms and entry team fee.

I think many of these little guys are do well to just locate a glove and don't need the extra pressure to pan handle or take away money from their household needed for other luxuries like school lunches, field trip lunches, going to the movies, etc.

So we "inherited" a super team that went on to be little league town champions that year.

Bought them uniforms and pssst (come closer..whispering) I bought a new set of pin stripe suits that were sharp with logo and they did look a little like the Yankees in an area of Red Sox nation where Yankee fans are far and few but usually pretty out spoken.  At the time $1000 for the uniforms was pretty pricey but boy did they look sharp. The team had a pitcher that was all over the infield too to keep from letting the game get away from him like little league can do when communication breaks down.

When the right fielder goes into a sunshine, looking around kinda thinking about ice cream after the game mode state of mind.

And has left the ball park like Elvis has the building. The game which has a play that involves him after one more pitch but he has left the park momentarily thinking about what kind of ice cream he is ordering in three more innings.

He is already mentally at the Houlton Farms Dairy Bar.. getting an early place in line in his head. The catcher for the team commented that Luke was hard on him, but his mom pointed out saying "Danny...Luke is no harder on you than he is himself".  A light bulb went on over Danny's catcher mitt as he realized he was putting out and not just dishing out.

There is nothing like watching your child, the kids of other friends, neighbors and business owners all together on a warm summer day enjoying the sun, talking, hooting and rooting for your home team.

Now the teams have a one look with different jerseys and hats but same gray pants to economize and streamline the league.

Here is a peek at some of the past MOOERS REALTY little league teams we put in the fourth of July parade. To recognize their effort thru cold spring practices and trips to the dairy bar to celebrate victories and to sooth the hurt of a loss in the final inning when they thought the game was in the bag situations. For colder weather entertainment, check out this video on Houlton Hodgdon Blackhawks You Tube game that was a good one we videoed. Maine is the way life should be.
I'm Maine REALTOR Andrew Mooers, ME Broker
Like favorite_border
favorite_border 0
Re-Blog
repeat 0
bookmark_borderbookmark

I was pretty proud of this team over the years and neat to see little guys who grew up and know that they were part of the "system" or franchise! Sponsoring hockey team just as much fun and some of the same neat kids on the team! Most of games when you live in Houlton Maine are play in New Brunswick Canada where we live on the border!

Like
favorite_border 1
Broker Nick
South Florida Real Estate & Development, Inc. - Coconut Creek, FL
Broker Nick Relocation Broker Service
You are a team member to your community and are touching lives. I enjoyed your post.
Like
favorite_border 1
Rich Dansereau
Positive Real Estate Professionals - Knoxville, TN
This is such a great post. I think that sponsoring children's athletics is such well spent money! You are to be congratulated! BTW, my father was born and raised in Houlton and ran cross country track their in the late 50's, early 60's He took the whole family on a "cross Maine" roadtrip one summer. I didn't appreciate it at the time, I do now, I was 15 and wanted to vacation at the beach! Thanks for sharing!
Like
favorite_border 1
Andrew Mooers | 207.532.6573
MOOERS REALTY - Houlton, ME
Northern Maine Real Estate-Aroostook County Broker
Thanks Nic.  Just like kids and am a very immature 51 myself I guess.  Kids seem to get along better than adults!  They don't stay mad, carry grudges and need each other to play these games. They just want to have some fun!  Rich..I knew there was something about you I like...Houlton Maine  / Aroostook County dna in your system...you do more loans on your end cause you are a runner!  Come back to visit!  Houlton had some really top knotch cross country teams...one year back in the 30's they went the whole way to New Englands and won the gold ball!  Thanks for stopping in you two!  We do a lot of you tube game coverage and you might get a hoot out of the hockey games or Houlton Maine snowstorms! Wonder where your dad lived in Houlton Rich?
Like
Rich Dansereau
Positive Real Estate Professionals - Knoxville, TN
Don't know where exactly but I will ask him when I talk to him next. He lives in Hawai'i now, quite the change. I think we saw 3 different house he lived in in Houlton. I remember his stories of potato picking as a boy and eating cottage cheese from some restaurant because you got a free bowl and of course Grandma wanted a whole set. It makes me smile to think of it now. I have been to Portland, Bangor, Bar Harbor (but apparently the cruise ships pull into port there now) and New Brunswick (I saw the river that flows backward at high tide). Maine is beautiful country but I moved back to ATL recently from south Florida and this even seems cold to me!
Like
favorite_border 1
Andrew Mooers | 207.532.6573
MOOERS REALTY - Houlton, ME
Northern Maine Real Estate-Aroostook County Broker

Visit the Discover Northern Maine page and check out the you tube videos  on Houlton.  The cottage cheese story is a classic! That generation did not waste anything and lived very happily and very frugally! Younger folks nowadays could take a lesson out of the book on it! Andy

Click this latest flick and rate it...major match up with Houlton and Presque Isle hockey teams...always a good contest...Houlton came out on top in this one!

Like
Rich Dansereau
Positive Real Estate Professionals - Knoxville, TN
Nice video! I checked out your work listing website last week actually! Your area really is quite affordable! I checked out your Discover Northern Maine website last night and enjoyed it immensely! It is very informative! I am going to search for some of the snowstorm videos.
Like
favorite_border 1
Andrew Mooers | 207.532.6573
MOOERS REALTY - Houlton, ME
Northern Maine Real Estate-Aroostook County Broker

Thanks for the kind comments! This area is great to live in and very affordable! Snow storm one was fun to make! Rich...here is the be in a Maine storm video whipped together for You Tube!

Nice video! This is a very cool picture. Very creative using the side mirror!

Still hoping to see an entry from you in February Baseball Talk 101 Contest and Season Long Contest - Your Picks!