Energy is an important topic that is on many peoples minds these days. With the rising costs of fuel and electric power, many households and individuals are considering alternative power sources. Solar is one of the more cost effective and biologically sound alternatives available.

One of the most interesting aspects of solar energy is how little of the energy production on the planet comes from the harnessing of the energy of the sun. In fact, only 0.1 percent of the power used today comes from converting sunlight into electrical current. It would be possible, however, to obtain enough power to run all of the worlds energy needs using solar energy. If more people were willing and able to install solar collectors on their homes and even their cars when technology gets to that point, solar energy could more than cover the Earth's power needs for transportation and housing.

Another of the interesting aspects about solar energy is how much solar energy is worth, or to put it another way, how much money you can save using solar energy. If you have a roof that is 1000 sq ft large, and you install solar panels on this roof, you could conceivably save as much as $6,460 dollars a year over the cost of oil heating. Unfortunately, the cost of installing the hardware needed to obtain the amount of power to save this money would be between $20,000 to $50,000; cost prohibitive to most home owners. These costs, however, are offset by tax incentives, rebates and net metering concepts in most states. While the upfront cost can be prohibitive, the savings over the life of the product are many times the initial burden.

One of the major hopes for reducing the cost of solar is found in Asia. Specifically, China is facing up to the fact it has massive pollution problems and is investigating renewable energy solutions. Working with American architects and developers, China is building entire communities that are made and powered by recyclable resources. Homes are made out of straw bales and powered with solar and geothermal heating. Given the sheer size of China and its population, the vicious pollution problem has spurred development in the renewable fields. With such a massive focus, it is hoped that the Chinese will develop more efficient, but less costly versions of solar energy for use around the world.

When considering solar as a platform, the most important aspect to keep in mind is that we have barely tapped it as a resource. If we can make systems that are more efficient and cheaper, the future of solar will be bright.

Anthony, we have solar panels on two houses.  It would take many years to recoup the cost of the panels.  Hopefully, there will not be a need to replace them in 5 years, as I have heard from other bloggers.  The cost of the product has to come down drastically to make it a profitable investment.

The cost needs to come down...It is just to high right now!

Great blog post, Anthony.  Yes, there is so much potential here.  I think it will really take off when they can get the cost down. 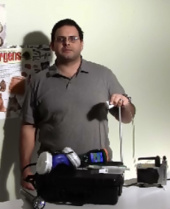