Years ago I would see a black kid riding a bicycle in and around Yuma, Az. who was always dressed as if he was coming from church, wearing a bicycle helmet and always smiling.

What stood out to me most, was that he was never dressed as one would be to go about riding a bicycle in the middle of the day, and I would find him at random places in and around town. But what stood out to me the most, was that he didn’t really seem to have an urgency to get anywhere, more so as if he was taking in the sights and freedoms to be able to ride his bicycle as he commanded.

In 1997 I moved to Phoenix, Arizona and later moved back in 2010. A few months after moving back I was tickled to see, the kid who was riding his bike for years before I moved to Phoenix, Az., now a young man and still dressed as if he was headed to church and smiling!

A smile that put things into prospective, the day I was reacquainted with what I considered to be an old friend. Although we had never met, to me, knowing who he was, even though he had no idea who I was, readily made him a friend to me.

I couldn’t help but admire how he went about his journey. He would smile with this sense of joy that could only come from a person’s inner light. Everyone around him driving in traffic scurrying to get to work, pick up their kids from the sitters or off to an appointment, then racing home to make dinner, had no bearing on the momentum of his stride. He just smiled…….

At the intersections that he would encounter, he patiently waited for his turn to participate in the rest of the race that we impatiently waited for from a light to turn from red to green. Then, as if to say he could race any one of them on his bicycle, he would continue to smile a little brighter as he passed in front of the cars readily idling to launch in front of the car next to them, and not even be noticed.

As my return home (Yuma, Az.) turned into years, I couldn’t help but appreciate seeing my friend riding his bicycle around town. One day, I decided I would approach him and introduce myself to him, and without fail, I passed him in traffic as he was riding on the sidewalk. So many thoughts rushed thru my mind. How do I say hello to someone who has no idea who I am, without thinking that I am a freak? What if he gets offended that I stopped him from getting to his destination timely?

I turned my car around, and went off to say hello. I looked for my friend frantically but I had lost him just as quickly as I had seen him. “He must have turned into the apartment complex,” I said to myself. As I pulled in, there he was, walking his bicycle up to his apartment. I parked my car and walked up to him with an anticipation of what was to come. “Excuse me,” I said, but I wanted to say hello." He stopped, turned around and to my delight, my friend was still smiling. “Yes,” he replied? “My name is Ruben Hernandez and I am a REALTOR, I wanted to give you my business card.” “Oh, ok? He replied. “I want you to give my card to a friend of mine.  Should you ever need anything for your bicycle, give him my card, I would like to pay for anything that you might need on your bicycle for you, is that ok?” “Thank you, I will. What a nice man, no one has ever done that for me before,” he said, as he slowly walked into his home pushing his bicycle.

I never got to say good bye to my friend, or get his name. But, now when I see him riding his bicycle around town, I say, "There goes my friend." 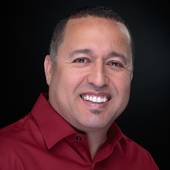