As I was daydreaming on my flight back from Juneau to Seattle this past Friday evening, I couldn’t help but think how fortunate we are for our then Secretary of State, William Henry Seward (1801 - 1872). Seward racked up many accomplishments. He graduated from Union College in 1820 with high honors and was admitted to the New York State Bar in 1821. He served as New York’s 12th Governor then became US Secretary of State under Abraham Lincoln and later President Andrew Johnson.

On the night of Lincoln’s assassination Seward survived an attempt on his own life. The Russian Crown was strapped for cash at the time and huge loans were due. They wanted to offset the Brits, their territorial competitors, so they planned to sell this useless wilderness to the United States.

William Seward finally settled the lengthy negotiations for roughly 2 cents an acre after an all nighter that finally ended at 4:30 am. American popular opinion was split about 50/50 and many deemed the purchase, “Seward’s Folly.” In 1865 who'd settle this wilderness? We were having enough of a challenge trying to settle the west coast. Well, as you know, in 1896 gold was discovered in the Klondike, Yukon, and in Juneau and the rush north was on. Over 100,000 prospectors headed north and the rest is history!

Alyeska (Alaska), the “great land”, is an Aleut word. It means “the object towards which the action of the sea is directed.” The history of the Aleut in Alaska is more than 7,000 years. Alaska is larger than Texas, California, and Montana combined and has a coastline longer than all the other US states combined.

As a recent visitor, I was totally blown away by it’s grandeur and beauty even if only from the air and my two short visits to Anchorage and Juneau. Thank you, William Seward!

Just outside of Juneau, Alaska on the afternoon of June 20, 2013 from Seattle flying north over Kupreanof Island up Stephens Passage by Admiralty Island. 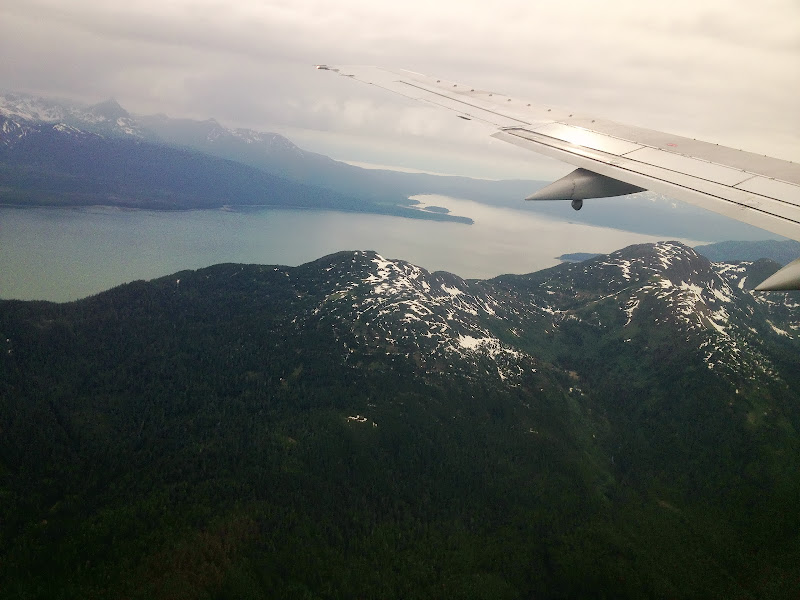 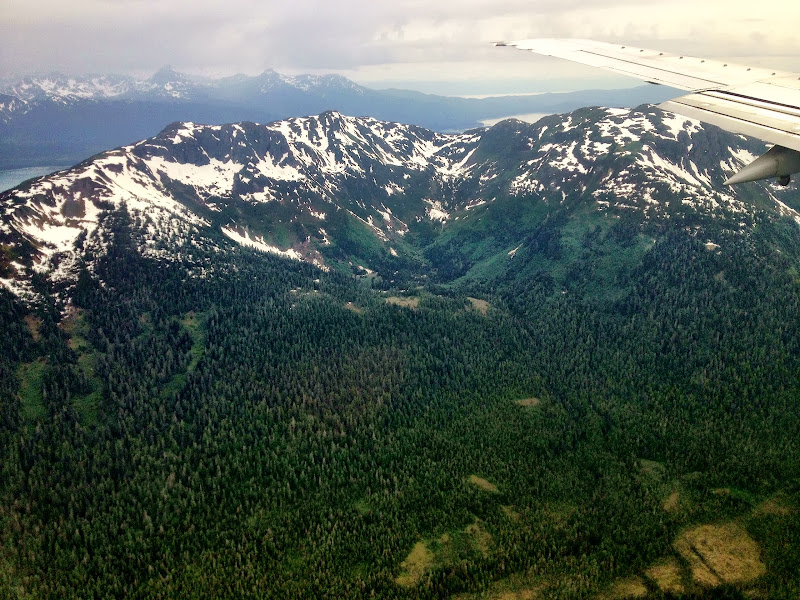 Coming in for a landing, that’s the Juneau airport off in the distance on the right. 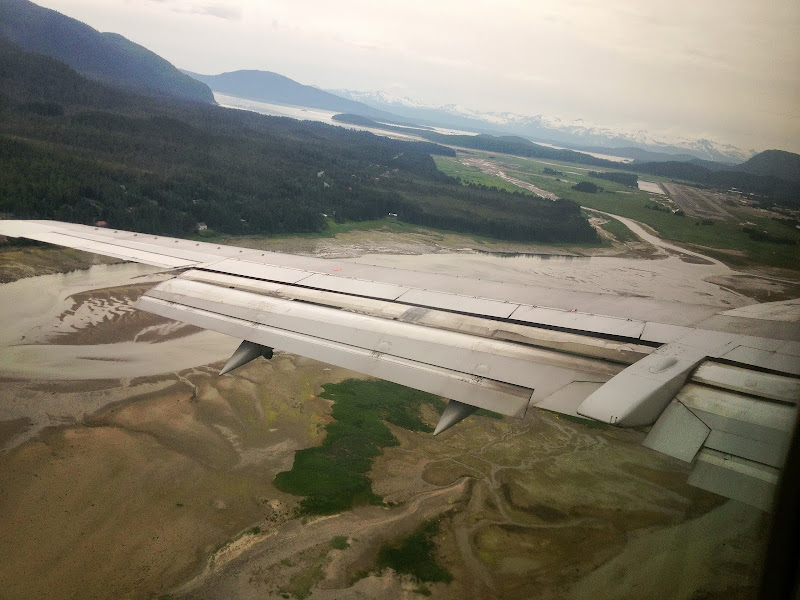 Downtown Juneau, Alaska from my room on the 5th floor at the Westmark Baranof Hotel. 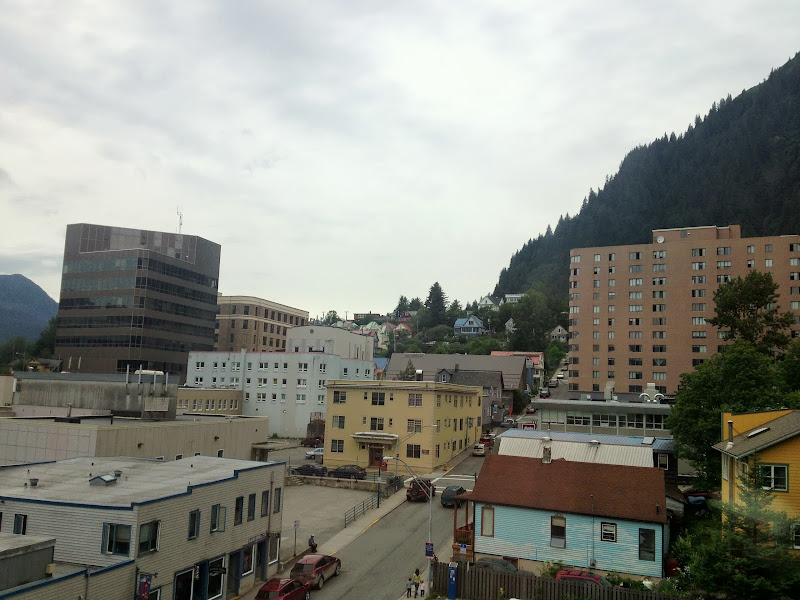 Another shot from my hotel room. Juneau is cradled between the water and right upside to the Mountains. 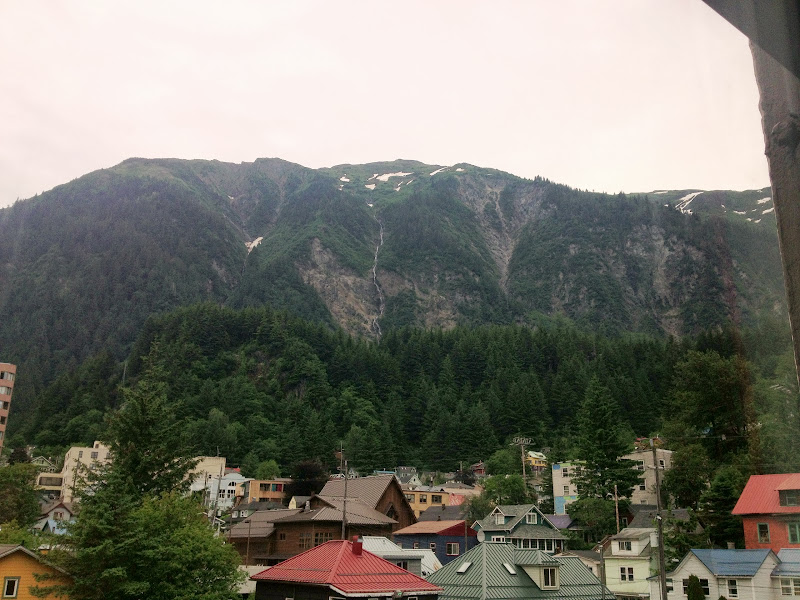 Juneau is a port of call and it's June! There's a lot of people in town via the cruise ships. 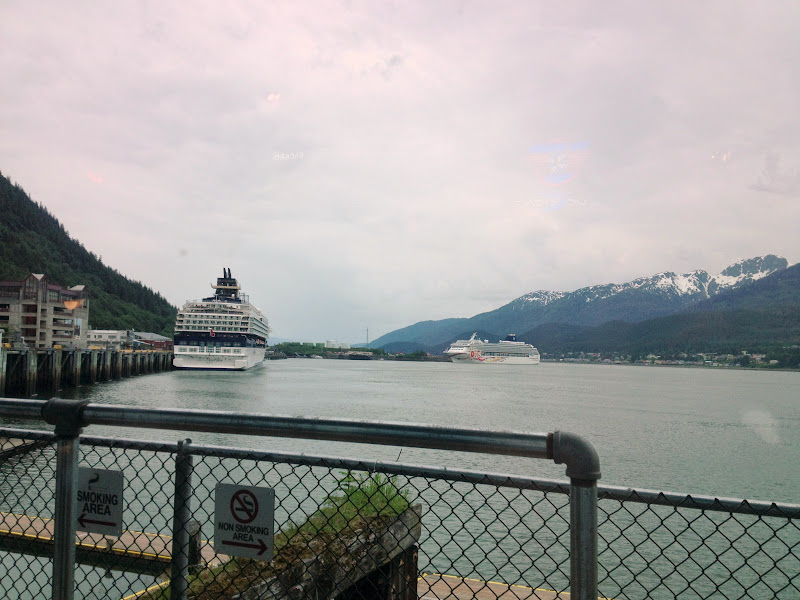 The Volendam... In the summer season she sails the Inside Passage to Alaska. In winter she sails out of Australia and New Zealand. 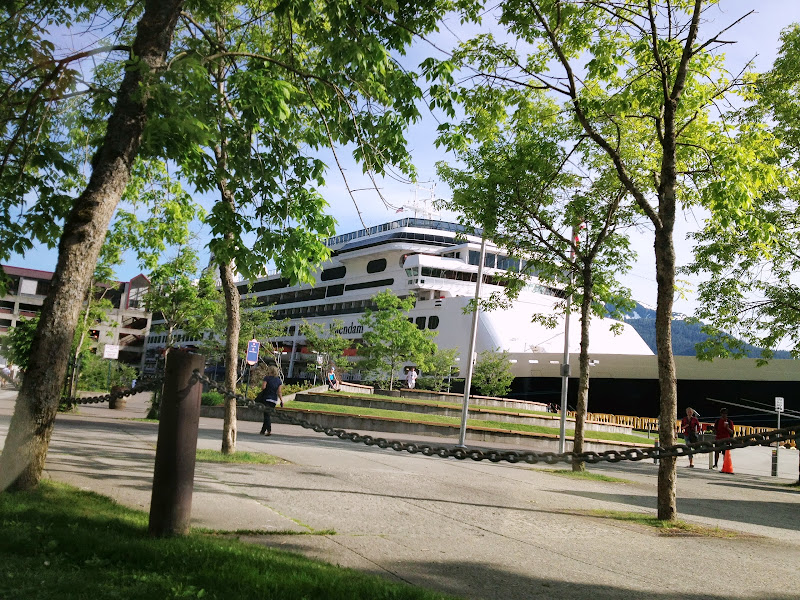 Hats off and a big shout out to my friends and coworkers at First American Title, Alaska. Terry Bryan, State Title Manager, and Deb Moore, State Sales Manager. It's early Friday evening and we're done with our day teaching clock hour classes. We've been on a dead run for two days and have flights to catch to get back home.

We only had a little over an hour so we headed for the wharf and hungout at Twisted Fish Company Alaska Grill on the waterfront to enjoy the sunshine and a few refreshments. What a cool place and I want to do a great big shout to Kate, our server. What an angel! We told her we only had a little time and where flying out. Of course, it's Friday evening with two cruise ships in port and they're slammed crazy busy! She totally worked miracles, leterally ran from our table to the kitchen to place our order, and made sure we were well taken care of so we could enjoy our short visit.

Thanks again Terry and Deb for being so on top of everything and making everything happen. Your Alaska team is absolutely wonderufl to work with and again, thanks for inviting me up to Juneau to teach Real Estate in the Social Age... I had so much fun with Juneau's real estate pro's that attended the class.

Needless to say, I haven't been all that productive this weekend. Kind of a quiet couple of days at home being domestic. You know, fun stuff like laundry, grocery shopping, and getting ready for next week.

what a wonderful place to visit... we were there two weeks ago on a cruise and it was magnificent and during their "heat wave" must be fun to be a heart beat away!

Rene, I hope to make it to Alaska one day. So many have told me it is a great trip. I want to go for 2 weeks.

Amazing photos, Rene'.  My older sister and her husband moved to Alaska in 1963.  They endured the earthquake that hit there in 1964.  After that, they moved even more North and deeper into Alaska.  In 1968 they made a trip back to California to visit our family.  They told the story of how they had to snow-mobile south to get on a bus which took them to the airport.  That process took longer than flying from Anchorage to San Francisco.  My little niece was mesmerized by the lines down the middle of our streets.  She hadn't seen them before.

Rene', I think you are living an INCREDIBLE LIFE!I simply love indulging in your travels...my granny and I did the inside passage many years ago on a small (very small) "cruise ship" in March, of all times! We loved it. One of the crew members who lived in Juneau took me on a brief "tour" showing me where the prostitutes used to live--what an eye-opener!

I would love to go back. Alaska was barely TOUCHED by our trip.

Mark: Tis a wonderful place. And me, like you, so lucky to visit during one of Alaska's most beautiful summers in a while. I was in Anchorage 2 weeks ago, then Juneau this past Thursday and Friday. I brought a jacket both times that I never needed!

Debbie: You have to go! I live only an hour and a half by plane to Juneau, two and a half to Anchorage. On the ground, in the air, on the water... magnificient!

Myrl: Thanks! When I was in Anchorage 2 weeks ago, my coworker friend Terry Bryan was showing me the areas around Anchorage that sank several feet after the 64 earthquake. My heart pounds, there's something here that resonates so huge and reminds me of my NW roots in the Seattle area.

Gayle: Thanks so much. Something changed for me about a year or so ago and I'm loving a renuied sense of appreciation. And, though it maybe considered corny, who cares! I love the histories of areas. Close by is Cle Elum, and many stories there about sharing my dad, and its history was famous for prostitutes and miners. I've only just dusted a few spots, and it's such a huge state. I look forward to many trips back, I hope they are in my future!

Can't remember if you know this, I grew up in Alaska. Mostly Juneau. ALso lived in Anchorage for a time. Juneau is my forever home in my heart. My oldest son has a guide company there and I visit often. LOVE it.

Hi Debb... I think you may have told me that, but thanks for the reminder. I love Juneau. I was so moved by the beauty of this area!