Rapid Realty first opened, officially, in 1998. We started in an unassuming first floor location, with only one computer. It may not have looked like much, but it didn’t stop the agents and I from bringing in deal after deal.

In order to grow Rapid Realty, I often put my neck on the line. In order to keep Rapid growing strong, I had to put in over $400K of advertising. This of course being before online advertising became as widespread as it is today.  I even renovated my first  property to house and hold the growing number of Rapid agents.

When I was just days away from signing leases for several new company-owned offices, though, I bumped into an old friend, who raved about the virtues of franchising. I was skeptical at first, after all, I started Rapid Realty and had  planned on keeping full ownership of any additional offices to ensure their success. After doing some research, we soon understood that franchising was a solution to an industry-wide problem, mainly that top agents didn’t just want to manage offices, they wanted to own them.

I next went to Chicago to meet with many of the world's experts on franchising. I was  committed to learn everything I was able to by studying hundreds of other franchise companies and see how they grew, what helped them grow, things to avoid, just to ensure Rapid Realty's success.

After a year of these endeavors Rapid Realty opened their first pilot in Crown Heights. It went beyond expectations and inspired agents to open their own. In August of 2009, Gabriela Falquez opened the first official Rapid Realty franchise in Bay Ridge.

The end result of all this hard work is easy to see. Rapid Realty has quickly become New York City's largest rental company. With  dedication, Rapid is poised to grow even further. Franchisees have been making back their initial investment within the first year, which is unheard of in practically any economic environment.

Show All Comments
Dale Baker
Baker Energy Audits and Commercial Properties Inspections - Claremont, NH
New Hampshire Relocation Real Estate Information
Howdy and evening  Anthony
Welcome to the ActiveRain Real Estate blogging community! You'll sure find a lot of mighty fine folks here in the community to get to know. I'm one of the many ActiveRain community members which are an ActiveRain Ambassador.
If you should ever have any questions about how to do anything or about the rules of the ActiveRain community, please feel free to contact me either by sending me a e-mail or by giving me a call, I'll sure be mighty glad to give you a helping hand. If for some reason I don't know the answer to a question which you might have, I'll sure will find out the answer and get back to you with the right answer.
Take the time to look at the different groups within the community, pick some different groups to join, post your blog posts in them, be sure to take the time to read the posting guidelines of each group you might want to join, folks sure will want to follow them. Members can join as many or as few of the different groups within the community as they would like to. Members are able to post their blog posts in 5 different groups at a time.
Keep up your mighty fine job of posting! I'll be looking forward to seeing even more blog posts written and posted by you, plus seeing you join some of the mighty fine groups in the AR community.
Have a good one
Dale in New Hampshire
Like
Charles Stallions
Charles Stallions Real Estate Services - Pensacola, FL
850-476-4494 - Pensacola, Pace or Gulf Breeze, Fl.

Hi Anthony, love the post, owning a company is liken to having a baby I suppose and just as satisfying watching it grow.

Welcome to Activerain from from all of us at Ken's Home Team. I think you will find this site to be a wealth of knowledge and referrals. This really is the best real estate blogging and real estate network on the internet. If you have any questions about Activerain, reach out to the wonderful Ambassadors here in the rain. (They are a wealth of knowledge and were picked by the Activerain staff for their willingness to help others)

Thanks guys for the support and encouragement! 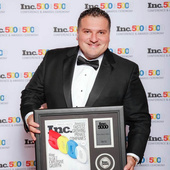