There’s a teeny tiny little park at the very northwest corner of Renton Municipal Airport, probably one of Renton’s better kept secrets, unless you fly into Renton in a seaplane or you’re a local like me who’s been around these parts for a long time. You'd probably never know it existed. 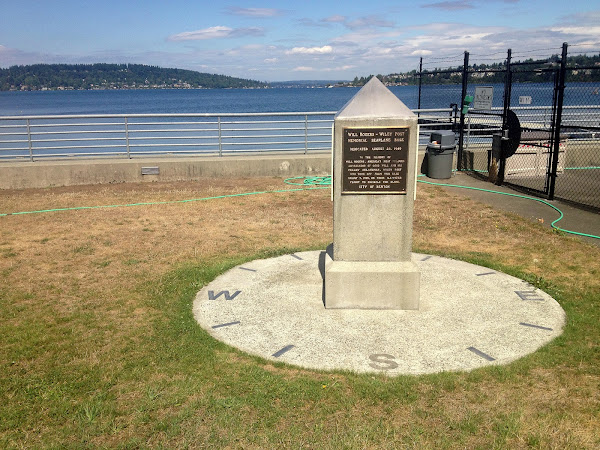 I love to stop here on occasion when I take the back way home from Seattle down Rainier Valley. The park at the Will Rogers - Wiley Post Memorial Seaplane Base is just a small patch of grass with a monument. Yet, it's significant because this is the place where Will Rogers and Wiley Post took off (from the lower 48) to explore airmail routes to Alaska and Russia then to continue their adventure to encircle the globe. 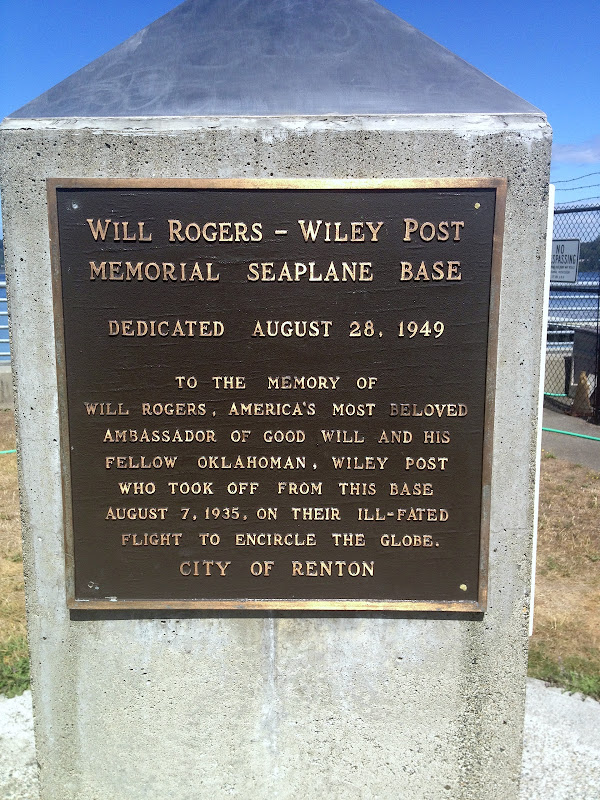 The views from here are beautiful looking north over Lake Washington at Mercer Island. You can see the tops of skyscrapers in Seattle to the left and Bellevue to the right. You’re right up close to the planes landing at Renton Municipal Airport, now known as Clayton Scott Field and the seaplanes land and take off in the water right in front of you. 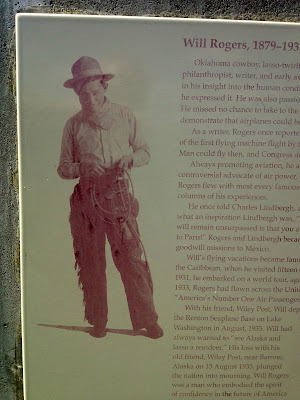 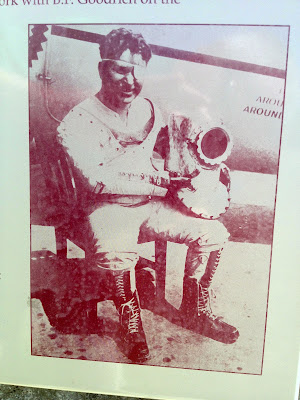 Will Rogers and Wiley Post took off from this location on August 7, 1935. My Dad (Al Fabre) and my Uncle George then 14 and 16 years old kids were here to witness the event. About a week later Will and Wiley would flip the plane on take off from a small lagoon just outside of Barrow, Alaska and both men were killed.

Here's a 34 second clip of a piper cub coming in for a landing over Lake Washington from the north on this beautiful summer afternoon in August.

I stopped here this week after a busy day up north and a meeting in Seattle. I packed a lunch and sat under a tree in the shade watching the planes come and go and enjoyed a quiet moment and a few memories of my Dad, my Uncle George, and a little bit about local aviation history in Renton, Washington.

If you’d like to know more I did this post last year: Will and Wileys Last Adventure.

Rene, Will Rogers left his mark on so many of us. His and Wiley's death shook so many people up. If they had lived no telling how many more events and sayings would be a part of our lives today.

Rene what a great story!  Will Rogers was the goodwill ambassador. That must have tough to watch happen for your Dad and his brother.

Hi Debbie, indeed, Will Rogers left an amazing mark on our culture and defined a generation.

Hi Anna... Fortunately Dad and Uncle George were there to share the beginnings of a great adventure and all of the excitement... But I remember them both tell of the shock they felt when Will & Wiley later crashed in Alaska.

It is neat to find these little places tucked among the bigger places, which have a special tale to tell:-)

Hi Myrl... Agreed. I think every community has many delightful little places and I love discovering the one's I didn't know about.

Rene' loved Will Rogers thanks to my Dad who loved him as well, great memorial...Los Angeles has a great love for Will Rogers.... how amazing that your family had the opportunity to see this' take off' ill fated or not. Glad you shared this bit of history, Endre

Thanks for telling us about this little park with a very historic monument. And, thanks for this chapter of our history.

What a lovely little historical place.  There is a Will Rogers Park in Pacific Palisades, California.  When we lived nearby we used to go to this magnificent park.  It has hiking trails, with one we loved called Inspiration Point. His home is there now a museum, and the polo fields are there.  Great views of the ocean also.  A

Endre: Thanks... Funny, but I remember (as the first generation who did) watch Saturday morning cartoons etc. They ran old western movies also. Somehow, I remember seeing a lot of Will Rogers then. My folks were big fans of Will and his name would often come up in their stories about the Great Depression. I like his satire and rope tricks :O)

Roy: This got me thinking about the several places around here that are small, out of the way, and practically forgotten... Hmmm... Sounds like a new series! Thanks!

Alexandra: Thanks! I would love to visit the Will Rogers Park in Pacific Palisades.

I loved my many visits to the Seattle area, when my daughter and son-in-law were living there.

I had no idea!  I believe that there is a statue of Will Rogers near the Library at Lake City too.  I'll check it out next time I'm in the area.

Joe: If you ever get up this way again, give me a call if you'd like to get together or do a little site seeing!

Barbie: There is a statue of Will Rogers in Lake City... I've seen it!