Like:
Home > Blogs > Poppy Dinsey > A thoroughly British Blog.
If you’ve always fancied a fairground in your back garden then you’re in for a treat, if you don’t mind a property that comes with baggage that is. Most people would like the idea of living in the former home of an international celebrity, but when said celebrity is creepy no nose Michael Jackson you may not be quite so enthusiastic. That said, if you need a home with space for elephants to roam then you probably won’t find a better pad than MJ’s ‘Neverland’. And who can resist year round Californian sunshine?

The childhood star is having his 2,900 acre former home auctioned off on the 19th of March outside the Santa Barabara County Courthouse, assuming he doesn’t pay off his debts of $25 million in the meantime. So if you’re in the area, why not pop along and place a bid! Goodness knows how much it will go for, estimates for how much it was bought for in ‘87 range from $15 million to $30 million. Oh, and the upkeep at it’s peak was a princely $4 million per year!

The property/amusement park was once Michael’s pride and joy, but as he’s so keen to turn down work (he turned his ‘nose’ up at a $30 million dollar string of London concerts) he obviously isn’t too sad to see it go.

It’s actually my birthday on the day of the auction, but I don’t think Neverland is quite on my wishlist. 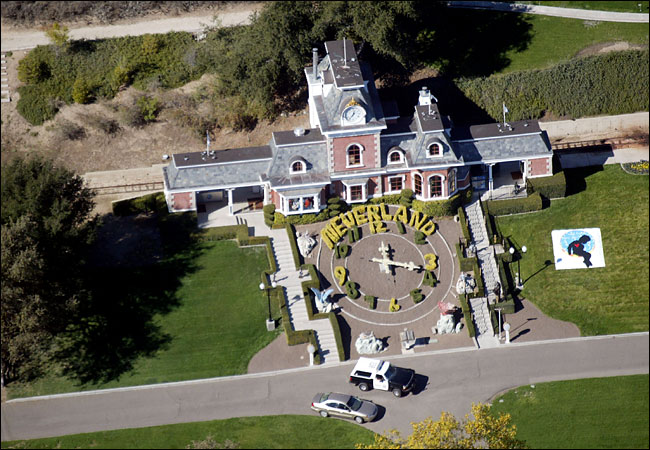 Not my cup of tea!  Maybe it could be turned into a commercial ammusement park.

I did get to show and actually had a 2nd showing at Oscar Hammerstein's estate in Doylestown, PA a few years ago.  It wasn't a big estate, but the owner (not related) ran a small elite part time B&B with the rooms themed after movies.  The pool was Sound of Music.  There were props used in the movies incorporated into select areas of the property/home.  Very nicely done.  What a difference reputation makes.

Brian - Whoever buys it will need a heck of a lot of money, maybe it will be another celeb? I guess we will have to wait and see...