March weather has a saying.  In like a lamb, out like a lion, or vice versa.  We tend to think of the weather in South Dakota as somewhat extreme.  We have cold winters, and we have hot summers.  In fact the coldest temp we had was a couple of weeks ago.  The thermometer said minus 20 when I got in my van.  At first, I thought that the van had some sort of malfunction.  Then as I drove, the temp climbed to -19.  At that point I knew we had a very cold day ahead of us.  That doesn't even count the wind chill.

You'd think that I'm trying to discourage people to move to South Dakota with this opening paragraph.  But I have a point to this topic.  Even though our weather and temperatures seem eratic, our housing market seems to keep pretty even and positive.  NPR (National Public Radio) reported that South Dakota new construction sales were the only one to report positive gain.  South Dakota also reported positive growth on existing home sales.

Sioux Falls can attribute their success to major growth in the medical and banking industries.  Both fields are growing by leaps and bounds, bringing jobs into our community.  The local economy seems somewhat resistant to the recession happening nationwide.

So despite our weather being a roller coaster of hot and cold, the housing market seems to stay relatively warm.  With any hope, it will even get...hotter!

And S.D. has two other great things foing for it

2 its right next door to MN (my home town)

With all that going for it is should start filling up soon.

Aaron I have been to spearfish s.d. a great place.

Like
Dwayne West
Atlanta Real Estate - Canton, GA
Canton Georgia Real Estate
Down here in Georgia it has really warmed up today. I think it topped 70 degrees. I wish you warm weather soon.
Like
Aaron Rietsema
Town and Country Realtors - Sioux Falls, SD
I hope the weather can warm up soon.  I'm ready for something other than coats and hats.
Like
chevron_left
Older Post
Back to Top
Newer Post
chevron_right
Rainer
3,725 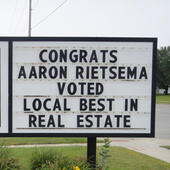 Sioux Falls Real Estate Agent's opinions and research on the market and trends.