Despite the seemingly poor start to the new real estate year, we have seen a real uptick in people coming out and looking so hopefully March will help improve the overall quarterly statistics. 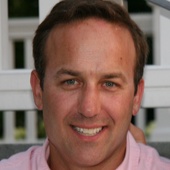