Another Nail Biter for the Katy Tigers

The Katy Tigers opened their High School football season last evening playing the Klein Bearkats in Reliant Stadium. Yes sir this was another of those nail biter games for the poor parents of the Katy Tigers as Klein was still in the game until near the end of the first half when viola the game was out of hand in a New York second and the fat lady was already singing for Klein. Katy actually showed their team is human as they made some errors! The final score was Katy 41 Klein 3. Like I said another nail biter! LOL!! Let also throw in the comment as how many high school footbal teams open their season playing at Reliant Park?

Before I get several Katy Tiger booster club members men and or women wanting to fight me in the parking lot for making inflammatory comments,  I support the Katy Tigers as this is my attempt at humor. Since not everyone understands what I am talking about, the Katy Tigers I believe have won 8 Texas State football championships ( if my numbers are off call me) and have made it very deep into the state playoffs many other years. They play at a very high level of football excellence and dominance that goes back to the 1980’s. This group has a long and storied history of high school football superiority and it continues today and probably long into the future.

This year’s team should be no different as everything I read tells me Katy Tigers once again are stockpiled with tremendous players and have a high probability of winning another state championship. What a total surprise only if you do not follow football or live under a rock or something like that.  There have been several years when I personally thought Katy’s junior varsity team could have beaten all of the other varsity teams in 19-5A division except for Cinco Ranch and Memorial. Come on fans and players from the other schools you know deep down in your hearts that statement is close to the truth! 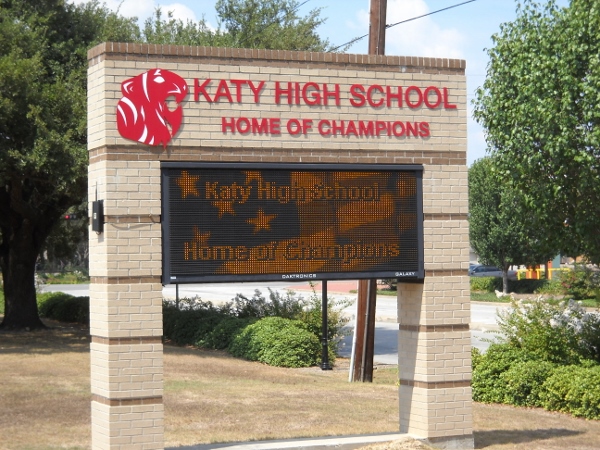 Their coach Gary Joseph after this game said something to the effect we were a little nervous on opening night and that contributed to the errors that were made. I should explain Katy makes very few if any unforced errors in any given season.  One of the jokes in our house is to find the Katy box score the next morning after game dayand say gosh it must difficult to be a Katy Tiger supporter as another heart throbbing game was barely won! LOL..

All residents in the Katy and surrounding areas if like football come to support out to watch the local Katy High School teams play as you have have a great evening loaded with excellent football, music, marching bands  and drill teams. High School football in Texas is a huge spectacle and deal. Let us all hope the Katy Tigers play to win another State championship this year!

Are you ready for some football? I know I am!

Another Nail Biter for the Katy Tigers

Bob my friend, Congrats to the mighty fine Team Katy Tigers on their Win of last night!!! Plus to the Parents of the players and Coachs! Here is to the Tigers going all the way again!!!

I love the Katy Tigers and I love when they win. I believe Tompkins played their 1st game last night and won! Yeah! I am ready for some football.

Congratulations to the Katy Tigers. It is easy to understand why the have so many loyal fans.

Good news for I know what they do to losing football coaches in HS football towns, ouch.

Truly want to thank you and Yolanda for stopping by during my absence. Had an very thoughtful week. Will post about it some day soon.

Katy Tigers are really some type of High School football program. Thanks for stopping by.

Howdy there Bob my friend, not only the mighty fine members of this here site, but also the mighty fine non-members of the site sure can always enjoy visiting your blog and enjoy finding and reading all kinds of helpful information. Your outstanding blog sure is for folks of all ages, which the info inside sure will help them in someway or another. This here blog post sure is one of those, which folks sure do appreciate you for posting for them to come along. Folks if you happen to be needing help with Real Estate, then you sure do want to be sure an take the time to talk with Bob and when you do, you'll sure find that he is the one which you will want to enjoy working along side of.

High School football wonderful memories indeed. Thank you for sharing gotta yell do you need my glasses there .... Can you not see what the heck.....