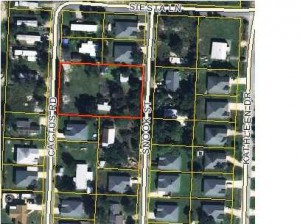 This building lot at 140 Snook Rd., Mary Esther Florida just sold! It's not as easy to sell a lot as it used to be, so I like to discover the best way to maximize the appeal and exposure of every piece of land I list on the Emerald Coast.  My first step when the sellers approached me with this piece was to simply check the plat online. It appeared that this Mary Esther lot was about four times the size of a standard lot in that neighborhood (reference the aerial above).  I asked the sellers about this and they stated that the lot used to be multiple pieces.  I then called the Okaloosa County Planning Department. The representative told me the lot "may" be subdivable simply by  providing a new survey to the county, but she needed to see the original deeds to make that decision. I had the owner bring me his paperwork, which was three inches thick of rubber-banded musty old deeds. I copied and emailed all of them to Okaloosa County. A few weeks letter, the representative called to confirm the lots could be easily subdivided without going through a formal process.  My next step was to list this parcel in the Emerald Coast Association of Realtors MLS in three categories for the best market exposure - residential land, commercial land (for development), and residential detached (there was a mobile home on the property).  Just a few months later, a builder bought this Mary Esther land to subdivide and build four houses.

Do you need help selling your house, condo or lot on the Emerald Coast of Florida with creative marketing?

Excellent job, Wendy.  By doing the preparatory investigation, you increased the value of the lot and the proceeds to the seller.

Wendy, it takes a creative Realtor such as yourself to make the FL property sell for the right price...good for you!