It was a rare Saturday that I wasn't working and was enjoying my son's high school baseball game. I glanced down at my phone between innings and saw an e-mail from the Buyer's Agent representing the Spokane Home Buyer who was set to close in 2 weeks on the house that my Spokane Home Seller had purchased 6 months prior, rehabbed from top to bottom and was now selling. Apparently the buyer was walking around the backyard and found a head stone with a name and dates of birth and death, next to what appeared to be a raised patch of dirt. My first thought was that it was probably a pet, so I googled the very unique name. Nope, it was the name of a real person, and his birth and death dates matched those that were listed on the tombstone. After 12 years in real estate working with numerous investors who have purchased and flipped Spokane Foreclosures, I thought I had seen every thing, but apparently not!

I forwarded the bizarre e-mail to my seller, then texted him to tell him to check his e-mail when he had a chance. He replied asking what the e-mail said. Texting back, I described what had been found in the backyard.

Immediately my phone was ringing. He asked me again if I was kidding, and when I assured him that I wasn't, he said he had never seen anything of the sort on the property. I told him that the agent described it as being located behind some bushes in the backyard. He said, "I'm dropping everything and going over there right now". Twenty minutes later I received a picture of the headstone.

He asked me what he should do. I said this was sort of uncharted territory for me, but probably our first step would be to check county records on Monday and see if we can find a record of an official burial site so we could rule out the possibility that he was buried in the backyard. It was an anxiety-filled weekend of waiting for the Spokane County offices to be open on Monday morning.

After more investigation, we were able to determine that the stone was just a memorial stone and that the poor soul had been buried in a real cemetery and not in the back yard. Quite a relief for everyone!

When you are selling or buying a Home in Spokane, you need a Spokane Realtor who can handle any surprises that might come up! We are here to help our clients through all kinds of situations to a successful closing, and we look forward to helping you!

Sign up here for a Free Guide for Home Sellers: 97 Ways to Maximize Your Spokane Home's Value Before Selling

Find Out Your Spokane Home's Value

Search All Spokane Homes For Sale

Show All Comments
Karen Feltman
Cedar Rapids/Iowa City, IA KW Legacy Group - Cedar Rapids, IA
Relocation Specialist in Cedar Rapids, Iowa
Keeping calm and verifying where the person was actually buried, saved the day. That is your job and I am sure that your seller was relieved as was the new buyer. What a surprising find!
Like
Vanessa Saunders
Global Property Systems Real Estate - White Plains, NY
Real Estate | Done Differently

What an interesting case. Thank goodness there was a proper burial site!

Could you imagine if someone was actually buried there?! Creeeeeeepy.

Glad you were able to dig a little deeper (pun intended) and find out the whole story!

Thanks for sharing, glad you aren't in my area because you would be stiff competition.  (bah dump dum, crash)

Good story....actually in my family, days gone by, was not uncommon to bury family in the backyard.

Ok, I thought for sure this was going to be a Halloween Trick and not a Treat!  Glad it worked out for you. Looks like the last owners would have taken the memorial stone with them, or rather yet, would have made something else than a stone for memorial, but I guess to each it's own.

Such an appropriate story for Halloween time!  I can believe there were some anxious moments until the truth behind the stone was found.  Good luck

At least they could  have a great Halloween party .. coming soon. and laugh about it. .. that is if the spirit is into partying.. lol

Brenda, we do get a lot of variety in our jobs don't we?!

Jimmy, good to know...I didn't realize that service exists, but will keep it in mind for future buyers who may want to know!

Richard, I'm not sure what we would have done, and so glad we didn't have to find out :)

Wow!! I was on edge reading that! I'm so glad that it turned out okay, because that could have turned out to be a realtor's worst nightmare! What a good scary realtor story. Thank you for sharing it!

I don't even want to know if someone died on the property...I would prefer my answer to always be - I have no idea, but I have no reason to believe anybody ever died in the home.

That said - a tombstone is hard to hide.  Discover it before and I suppose you could dispose of the marker - at least in Utah it's not something that requires disclosure (though I could not in good conscience advise someone that way).

Could have been a very tough situation and I'm glad it worked out well.

Richie, Did your friend put in a marker or stone in memoriam for their pet? Maybe the next owner will find it!

Steven, I thought it was eerie too!

Andrew, interesting to know that family burial sites are common in your area!

Ed, it might be good to keep in the back of your mind for future reference!

Kevin, I thought it would make a fun Halloween story!

Marc, well, if it ever happens again, we will know how to respond!

Vanessa, it was all in a day's work!

Suzanne, I'm not sure WHAT I would have done had it been a real grave site!

Tosh, you are wickedly funny!

Brad, I am learning that it was not unusual to bury family members on the property years ago, but I'm glad that it is no longer a common practice!

Graziella, thanks for commenting!

Adam, yes, we were relieved when we found out that there was no one under that stone!

Fernando, it would have been a great site for a spooky party!

Amy, I'm so glad you enjoyed my mysterious tale!

Utah Hassle Free Group, I'm just happy that "no body" was found under there!

Cindy, I had to laugh out loud when I got to the end of this post because it is such a great exmple of just how crazy things can get sometimes in the world of real estate and the interesting "finds" that can present themselves.  Happy for all involved that it turned out so well.

Hasn't happened to me either, however, I did have a haunted property...the home owners called in a ghost group who spent the night and verified a spirit or two still hanging around.

Cindy, thank God it was not what you were afraid of! Haunted backyard is seldom 'wanted'...lol!

Cindy, what a great story for Halloween time.  I once had a closing delayed for three weeks because of some remains that were found in a PUD neighborhood, far from the house that I was actually selling.  I think they wound up turning the area into common land for the association and put a small fence around it with some landscaping.

So appropriate for halloween. Glad it ended the way it did.

All the best with that one!!! 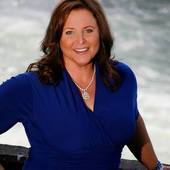