Should a Seller Disclose if They Believe Their House is Haunted? 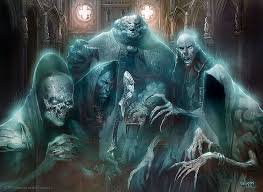 Interestingly, this actually appeared in a case Stambovsky v Ackley which was brought before the New York Supreme Court in 1990 and later overturned by the Supreme Court Appellate division in 1991.

Facts of the case were that the seller had promoted their home to the community and in national magazines as being haunted, yet failed to make that questionable fact known to the buyer.

Upon learning of this ominous condition, the buyer asked for rescission of the contact and their deposit returned. The Supreme Court disagreed, yet was reversed by the appellate court a year later.

While the various factions tried to wrangle with the idea of whether or not a seller is liable to disclose something which cannot be proven exists, the courts found a way to do what science could not—claim the house was haunted with this finding, “Whether the source of the spectral apparitions seen by defendant seller are parapsychic or psychogenic, having reported their presence in both a national publication (Readers' Digest) and the local press (in 1977 and 1982, respectively), defendant is estopped to deny their existence and, as a matter of law, the house is haunted.”

With wit and a bit of spiritual humor the judges explained their reasoning:

“…a very practical problem arises with respect to the discovery of a paranormal phenomenon: “Who you gonna' call?” as a title song to the movie “Ghostbusters” asks.”

“…It portends that the prudent attorney will establish an escrow account lest the subject of the transaction come back to haunt him. In the interest of avoiding such untenable consequences, the notion that a haunting is a condition which can and should be ascertained upon reasonable inspection of the premises is a hobgoblin which should be exorcised from the body of legal precedent and laid quietly to rest.”

So if when selling your home you find yourself frightened of how much you need to disclose, this case may just spook you into disclosing more ghastly details, rather than less.

You can read the full case here...