Home > Blogs > Ryan Wells - OK Real Estate Photography > OK Real Estate Photography - Blog
bookmark_borderbookmark
At this moment Realtor.com shows that there are currently 5,890 homes for sale in the Oklahoma City Metro.  The prices range from $4,290,000 to $6,200.  The goal of listing a home online, whether it be a listing site like the one mentioned above, or a For Sale By Owner site, is to turn a home seeker on to your listing.  From there, you have a chance of selling them a home. A good friend of mine always says, "You can't turn off what hasn't been turned on." Chances are potential home buyers will whittle their search down to a list of homes in a specific area of town and a specific price range. They typically will include listings just outside of their prime target of geography and price.  The list that remains is pretty much out of your control.  The buyers have chosen the boundaries.  Your listing is now one of many.
Because I was curious, I customized a search of homes for sale in and around the community I live in that were priced close to my home's value.  There were 1,028 properties found!  This means I have over one thousand choices to make as I scroll through and eliminate.  In some ways, I felt overwhelmed.  All of the listings had one thing in common; a little rectangular thumbnail photo to the left of the property information.  Often more photos would come up when you click on the thumbnail. Some of the listings had up to 36 photos of the property inside and out.  Some had no photo at all.
Behind most of these listings is a listing agent.  This is someone hired by the current home owner to market and sell their home as close to the asking price and as quickly as possible.  The home owner may never consider that their home is only one of 5,890 homes for sale in their area.  To them, their listing is all that matters.  They want to know that their listing agent is doing everything reasonably possible to get their home sold.  Home owners may never give a thought to the many challenges agents face when trying to find a way to make their listings STAND OUT.  The agents that figure out what it takes are the ones that help more people sell homes, make a good name for themselves in the area, and get referrals.
The most effective thing a person can do to set their listing apart from others on a listing website is to post professional photos alongside the listing information.  When I learned this, I began my journey of becoming: Ryan Wells, The Best Real Estate Photographer in Oklahoma City.  This is not reality yet.  Some may say this is too big of a goal while others say it is too narrow in scope.  To use a metaphor from the Bible, I feel like young David standing alone facing the Philistine army.  What right did he have to stand there?  We know that David was an adulterer and a murderer.  We know he was prone to depression and would shut down emotionally to the point he couldn't get himself out of bed. However, we also know that before he ever stood facing Goliath, the champion of the Philistines, he learned how to fight.  David had killed a lion and a bear with his bare hands when they tried to attack his father's flock of sheep.  There was no hesitation when his ear caught the chants of the enemy army as they taunted and threatened God's people.  Though the challenge was great and the enemy impenetrably resilient,  David had 5 smooth stones, a sling and determination.  It wasn't a great military campaign of which every minute detail had been crafted by the best minds of war that took down that giant.  It was simple.  Hit the giant in the spot that is most effective.  Right between the eyes.  Big ol' Goliath fell that day! I believe the best way to sell a home in today's world of smartphones, tablets, computers and smart TVs is to hit people right in their eyes.  Make your listings POP!
Agents, I know you want to be successful. I know you want to be the Best Real Estate Agent in OKC. I know you want to help people.  I have spoken to several of you in the OKC area.  I have wept with you as you told me stories of helping families sell their homes when the pressure was on.  There may be thousands of listings competing with your next one.  It may seem like such a hard challenge to press through.......Here you go: 405-664-7885,Ryan@OKRealEstatePhotography.com.  Here's a sling and a stone.  Let's take down some giants!
Like favorite_border
favorite_border 0
Re-Blog
repeat 0
bookmark_borderbookmark

Ryan, good photography is hard to come by, so I'm sure you'll be a great find for those who are challenged when it comes to great listing images.

Ralph, thank you for the encouraging word! 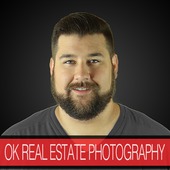