Yes, last Friday (December 6th) the America's Cup was flown to Seattle and then transported to the Anacortes Yacht Club where it was on display for club members and the general public.

Now, you may ask why would the America's Cup be bought to Anacortes? Well the full story is in a Book called "The Billionaire and the Mechanic: How Larry Ellison and a Car Mechanic teamed up to Win Sailing's Greatest Race, The America's Cup. by Julian Guthrie. Julian was in attendance and signed many copies during the showing. Anacortes has a chapter in the book as this is where the boat was built and tested just of Anacortes in Rosario Strait! Yahhh! As a result the Cup was brought back to Anacortes "in recognition of the community's support over the years — and to celebrate what's likely to be an ongoing relationship between the town and BMW Oracle Racing, said Jane Eagleson, the syndicate's spokeswoman." The cup travels in a custom designed Louis Vitton case and according to it's handlers always travels first class, has it's own passport and collects reward miles. It still has to undergo scrutiny by TSA and does get drug tested sometimes. You never know where it has been?

While on display at the Anacortes Yacht Club members and visitors had the opportunity to have their photos taken with the famous Cup and get a close up look at it  and for many, for the first time. I was there a bit early and watched the handlers carefully display the cup and was able to find the engraving where Australia first took the cup from the U.S.

Hey, I am an Aussie, what do you expect.

The cup is now headed back to it's home for the next 4 years at the Golden Gate Yacht Club.

If you are tempted to live in this boater's paradise, take a peek at the current  list of homes for sale in Anacortes. You can choose from cute cottages to luxury waterfront homes and everything in between.

For more information about Anacortes and surrounding areas, please fill out the form below and we will get right back to you.

Hi Helen & Larry - It's cool that Anacortes will be part of the defense of the cup and that the contributions of the community are being recognized. Nice looking piece of hardware.

Dick, It was fun to have the cup here in Anacortes. Champagne flowed and speeches were made. Now it is back at the Golden gate club until next time.

I love this story and I had no idea of the history behind it.  By the way, Larry Ellison's win was spectacular, we both love Cinderella stories. A

Ron and Alexandra, Yes it was a major upset, what a great story and Anacortes was part of the story.

Great story!  I bet it was exciting to see the cup in person!

I was not aware of this history, thank you for sharing the information with all of us.

Sharon, It was exciting and a rare experience.

Joe, Yes, we did not know the full history with the connection to Anacortes. 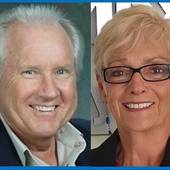