After a failed attempt to get to Girdwood Saturday, my friend and coworker Deb Moore and I tried again Sunday morning. The weather in Anchorage was much milder this week than last, but it’s foggy and the roads are slick and icy.

I’m so excited! We’re off to see her friend Dario Martinez, a musher. Dario lives in a small cabin near the Girdwood Airport by the Alyeska Resort. It’s about 40 miles southeast of downtown Anchorage off the Seward Highway.

Here Dario has a kennel with several dogs (around 12). I learned so much from him this day about his dogs and sledding. It was a wonderful lesson and I really enjoyed watching him interact with them. They’re so well trained. He never raised his voice and though a gentle force, there was no doubt who is in charge.

This city kid got to harness up two of the dogs, which is actually more like they do it themselves and I just feebly assisted. They were being very patient with me, I noticed. I got more than a few glance from the dogs and I swear they rolled their eyes at each other like, “Geez, this guy is like so totally an amateur!" 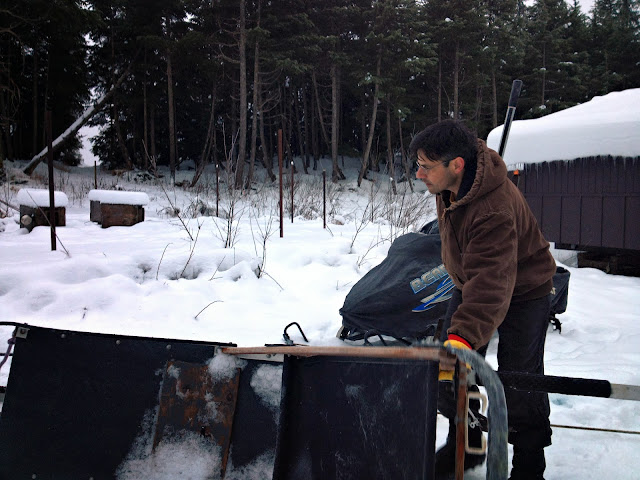 I learned that through breeding, sled dogs are smaller now than they were a few decades ago, yet they’re stronger, have more endurance, and faster. They don’t look anything like the Hollywood version…

Dario and I were on the sled and we towed another sled and a few things for a neighbor. When we started the run I was surprised at the get go that 8 dogs could start so fast. I'm thinking they were pulling around 500 pounds with the both of us and the gear. 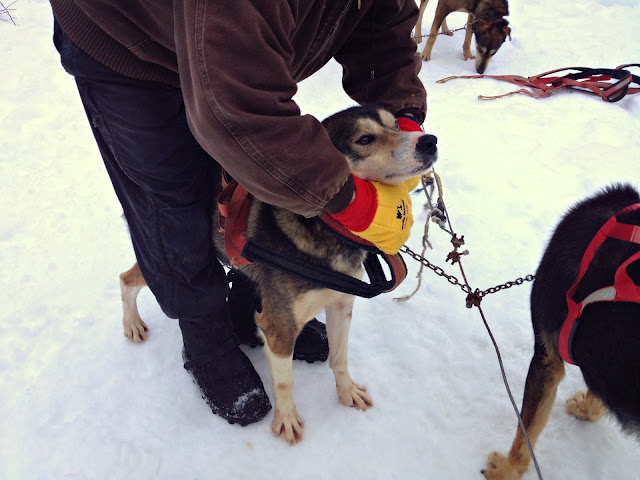 I love the section in the video where we stop at the top of the hill and Dario explains goals and rewards. I wish I would have had more battery power for my iPhone and captured more video. Yet, I’m happy I captured what I did and hanging on with one hand and my iPhone in the other, I’m amazed I didn’t drop it in the snow or get bucked off.

That's one off the old bucket list! I’ve always wanted to go dog sledding and the whole idea of a musher working with the dogs really sparks my imagination and sense of adventure. You know, like right out of Jack London, The Call of the Wild.

Many thanks Dario, for taking the time to share your passion with me. It was truly memorable. And thanks to my friends and coworkers Deb Moore for making it happen and Terry Bryan for lending me your boots!

Rene, I enjoyed living vicariously through you for my sled dog ride.  I felt like I was right on the sled with you - great filming.  I am impressed with how fast the dogs ran.  My Sadie crawled into my lap as I was watching your video and had her ears perked up and tilted her head toward the computer listening to the barks of the other dogs.

Hi Lisa... Thanks! I can't begin to explain what a life event this was. Dario Martinez was such a sweet soul and I just listened awe struck to his conversations he shared with me about the dogs, sledding, and life. It's right up there at the top of "moved off your cheese events in my life" and I am so grateful...

Very nifty photos, Rene'.  We have been "enduring" night-time temps of 28-29 degrees at night.  My toes haven't been especialy warm for several days now!  However, when I look at your pictures, I know I shouldn't complain:-)