School 36 which is located at 26906 Pine Mill Drive Katy TX is proposed to be named after retired educators Keiko Davidson. She spent 30 years out of her 35 year education career working in the Katy ISD system. She retired in June 2013 and was formerly principal at Hutsell Elementary School. 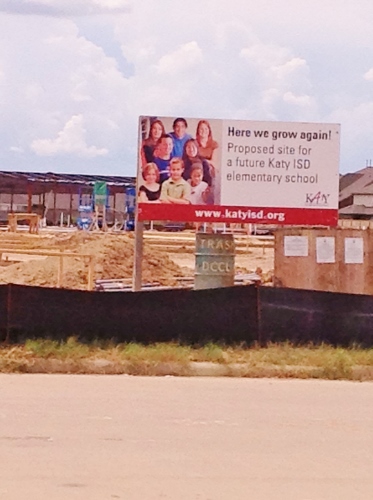 Campus Number 37 located at 5303 Flewellen Oaks Lane Fulshear TX is proposed to be named after the late James Randolf. Mr. Randolph began his Katy ISD career in 1996 and spent several years as a beloved PE teacher at Alexander Elementary School. I believe both of my stepsons are very familiar with Mr. Randolph and I understand he was a great guy and teacher. Mr. Randolf truly provided a great role model for all to follow.

A public forum will be held on February 4, 2014  beginning at 6 PM in the Katy ISD Board Room, located at 6301 S. Stadium Lane Katy TX 77493 to discuss the proposed names. Community residents are encouraged to attend this meeting and provide thoughts on these two proposed names.

Katy ISD names its new schools after educators who have taught in their system. I think this is a neat way to honor folks who have provided our children with so much of their life, time, energy and even money.

This is a great localism post for your community! I hope they will attend the public for emu and be a part of naming these two schools! Good for you for getting the word out!

Bob my friend, its sure mighty nice that the Schools get named after educators of the Katy ISD system. I sure do alwasy enjoy stopping by to read the outstanding blog posts you do, which help folks to be in the know, to learn mighty fine info which will help them in some way. I know that other folks also appreciate the time you put into get info out to them.

PS. I'm getting by so late to night because of haven to write and post 7 blog posts this eventing.

Bob, I love the idea instead of naming schools after politicians! This is very progressive thinking, Endre

Bob-That is a pretty cool way to recognize and acknowledge educators. We have some good ones that deserve the honor.

Howdy there Bob my friend, you sure do post mighty outstanding blog posts of both Local info and mighty helpful Real Estate info for folks to enjoy and learning from by visiting them at your mighty fine Katy, Texas blog. Folks sure will find each of your blog posts to be mighty enjoyable reading when they take the time to visit. Folks if you are needing help with Real Estate, then be sure to take the time to talk with Bob. By doing so, you'll sure learn he is the one an only one to work along side.