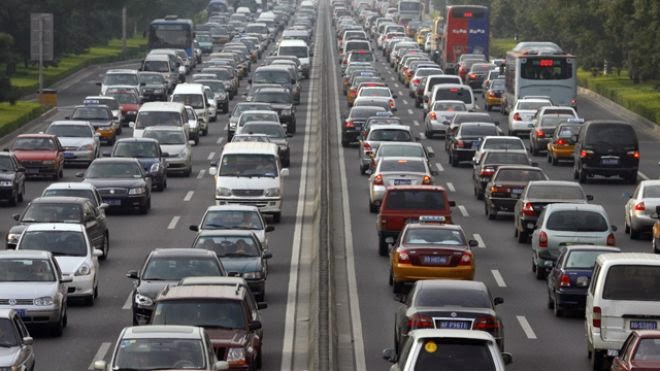 It’s a reoccurring nightmare – you’re stuck in bumper to bumper traffic during the 5pm rush hour commute, the road teeming with angry and frustrated motorists who cut each other off, try to squeeze ahead, and hurl expletives at each other. You’ve been in the car 40 minutes already for a drive that should take you 15 any other time of the day, but it seems like the somber column only inches forward as the sky fades to night…
Unfortunately for millions of Americans this isn’t a nightmare you’ll wake up for, but a grim daily reality as they commute to work, a bad dream that plays out both ways.  A long, harrowing, and frustrating ride to work can be one of the most stressful and time wasting rituals of an otherwise great day.  Studies show that many motorists waste the equivalent of a whole week or more per year stranded in their cars in traffic.  But it doesn’t always have to be like that – there are ways to reduce your commute time or at least adapt to make great use of that time – and maybe even enjoy it!
Here are some facts about our collective slow-moving rush to and from work, and tips to help you wake up from the nightmare!
Just how much time do we spend stuck in traffic?
According to the Texas Transport Institute, the average American wastes 27 hours a year stuck in traffic.  That doesn’t mean their total commute time is 27 hours of course, but that’s how long we sit in traffic jams that don’t move.
What does it cost us?
At least $78 billion a year (data from the year 2005) are lost every year in wasted working hours and extra gas.  Americans had to buy an additional 2.9 billion dollars of gas because of traffic congestion at an additional cost of $710 a year. 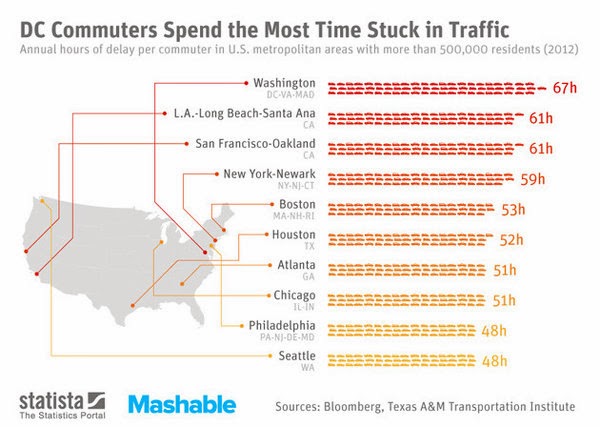 Which cities are the worst for commuters?
Here is a list of the worst 10 for annual hours of delay (not total drive time) per commuter for U.S. metropolitan areas:
Washington D.C.:  67 hours
Los Angeles, Long Beach, Santa Ana:  61 hours
San Francisco, Oakland: 61 hours
New York, Newark:  59 hours
Boston:  53 hours
Houston:  52 hours
Atlanta:  51 hours
Chicago: 51 hours
Philadelphia:  48 hours
Seattle:  48 hours.
How bad are our highways?
31% of highways in the U.S. suffer serious traffic congestions.  Over the last 25 years, highway traffic has increased 131% and it’s expected to increase another 40% just by 2015! Highways account for only 1.2% of our total roadways but include 50% of our trick traffic and 25% of all passenger traffic.
What are some solutions to ease traffic and long commutes?
Communications systems –
Digital message boards beside or on top of the highway alert motorists to accidents, drive times, upcoming road construction, slow downs, bad weather, and alternate routes, allowing drivers to make the necessary adjustments.
Ramp metering –
Ramp metering allows cars onto a highway based on alternating traffic lights.  It slows down the rate of traffic entering a highway but amazingly, that actually speeds up total flow and reduces accidents.  Cities who use ramp metering report a travel-delay reduction of 29.4 million hours annually and a significant decrease in traffic accidents.  However, it’s expensive and time consuming for cities to add traffic lights and the proper lane set up at every on ramp.
High Occupancy Vehicle Lanes-
HOVL’s, called car pool lanes by the rest of us normal people, offer a dedicated lane for cars that hold 2 or 3 people, allowing for faster passage and encouraging ride sharing.  There are also separate lanes or allowances for electric or hybrid vehicles.  According to the 2000 Census, nearly 81 percent of all commuting workers travel to work in a car, truck or van. Of that group, nearly 66 percent drove by themselves -- only 14.7 percent carpooled.
Adding lanes-
Traffic planners carefully study patterns of slow downs and bottlenecks and identify problem areas, allowing cities to add extra lanes or widen roads or highways in those spots.  Of course, the ensuing construction slows down traffic…
What are some methods for you to decrease your commute or make good use of the time?
1. Reduce breakdowns (that cause slowdowns and accidents) by keeping up maintenance on your car – tire pressure, functional lights, and brakes.
2. There are plenty of smart phone apps for traffic information and commuting.
3. Ask your employer if you can adjust your working hours so they are off-peak for rush hour, like 7-3 pm.  They might even let you work 4 10 hour shifts and avoid the commute one day a week.
4, Listen to audio books and newspapers, news, and business periodicals while you drive.
5. Organize you day while you drive by using voice memo software (or a simple digital recorder) to go over your To Do list.
6. Make a bunch of work calls (or call and say hi to your mom!) using a hands free device on your phone or in your car.
7. Grab a friend and carpool!
8. Change into comfortable clothes before you leave work- the drive will be so much more relaxes if you’re in sweat pants and a t-shirt.
9. In order to avoid getting pulled over, studies show you should stay within 10 mph of the speed limit or with the flow of traffic and don’t weave in and out of traffic or make sudden movements.
10. Be a good neighbor - let people in and definitely don’t block the box at intersections!
11. Get a toll pass system so you can fly right through toll ways without waiting in long lines.
12. Ask your employers if you can telecommute one or two days a week.
13. Listen to interesting podcasts while you drive.
14. Get an audio version of professional courses, college degree programs, or second language lessons so you can expand your mind – and you resume – as you drive.
15. Consider joining a gym near your work, not your home.  Every day at 5 pm when others are stressing in rush hour traffic you can be waiting it out on the treadmill and make the trip an hour later.
16. When the weather is good, bike to work.
17. Take the train if possible – you can take out your laptop and get your workday started or finished!
18. Breath deeply – try to relax and think of your commute as scheduled down time for you to clear your mind and chill.
19. Gas up, get your coffee maker set on timer, etc. the night before so you won’t be rushed in the morning.
20. Rock out!  Build music playlists exactly the length of your commute, single along, and rotate them frequently.
Like favorite_border
favorite_border 0
Re-Blog
repeat 0
bookmark_borderbookmark