Standing Before The Bar / Why We Hate Applying For A Loan

I was 21 and out of the Marine Corp just ten days when I went to work for a small loan company, a week later I was making loan decisions affecting peoples lives. Just two weeks more and I was in the field making collection decisions that could literally destroy peoples lives. 14 months later, and not yet 23, I was now a bank loan officer with millions (5) in authority!

I now sat in a large dark red leather chair, behind a dark cherry desk in an office paneled in rich cherry, with an impressively large 4 inches thick solid door! Two large heavily padded leather side chairs sat across form my desk. Those chairs or rather how people reacted sitting them are what this is all about. When friends or colleagues stopped to talk they were comfortable and relaxed. I loved those chairs, switch the desk for an ottoman and add good book and I’d have been in heaven!

When the chairman of the board brought people down and said "they need $25,000.00 would please write it up" these people were relaxed. But, when our receptionist brought people in and they had to ask "we need $5,000.00" you would have thought they were sitting on a t believe it, these people were acting like my small loan clients had when sitting in those little plastic chairs, talking about their desperation to a kid in an open room full of people.

It didn’t take long in this new setting to figure it out. I was a judge. These people felt like criminal defendants standing before the bar. That beautiful huge desk and the large chair behind it were as intimidating as the large raised "Bar" at the county court house.

If the intimidating setting weren’t enough, there sat a banker! Bankers have some common traits that are even more upsetting that the bank itself. Bankers start young, out of collage in most professions, you are seasoned before having the huge authority bankers used to have. Except for medicine no one gets as much of your personal information as a banker. Bankers have settled for a mediocre income with lots of security, they do not personally take chances. Instead of money bankers have their egos stroked, often causing a false sense of personal importance!

Worst yet, I started under the "Old System," if we didn’t like you, you didn’t get the money! It’s now four decades later, the "Old System" died in 1972, banks haven’t dominated the mortgage market since 1974 and have lost most other markets. "Loan Officers" are near extinction! "Loan Officers" use to make decisions, we decided wether or not you get the money, almost no one has that authority anymore. And yet, people still feel their being judged!

The idea of judgement exists because so many incompetent loan originators make their clients feel guilty.

You, the client, don’t understand you are no longer judged, you haven’t been for the last thirty some years.

Your credit history is put on the scale, it’s nothing personal, you’re assigned a number and treated accordingly. Just like your doctor’s scale tells your weight.

The bad news is that credit scores are arbitrary.

Life is arbitrary, my doctor’s scale is set so that each pound contains 16 ounces I think 24 oz. would be just about right. The good news is that like my weight we can do something about bad numbers.

There’s more good news, like clothes for the pleasingly plump, there’s a loan program available for almost everyone. I pay slightly more for my close at the big and tall stores, than the skinny guys pay at Walmart. If you have low credit scores or other high risk factors, you’ll pay a little more for the money from a non-conforming lender.

There are some things you can do to avoided that awkward feeling of being judged.

First you can make sure your credit is as good as possible, you can determine who you are.

Second, always start with a mortgage broker, brokers are paid on commission they get paid to get you the money not to judge you.

Third, answer all questions, fully and honestly, but don’t over embellish. Many a person has talked themselves out of the money.

Don’t let your originator condemn you, his job is to get you the money you qualify for.

Lastly, you’re the judge, is the originator worthy of your business?

OMG Bill, Just out of the Marine Corp and you were making lending decisions? That's incredible. I'm sure you weren't working on mortgages in the Corp. Didn't they want experience? Wasn't training part of the equation? And then the Bank? Who did you know?

You're right, the new way is better. And since FICO scores are arbitrary it is only fair to game the system.

Not until my second week. I completed their 2 year training program in 60 days, I was single in a new town where I didn't know any one and had nothing better to do.

After 1 year they transferred me and I had full authorty my new manager didn't and they didn't tell him! The poor guy went on vocation when he came back in two weeks he panicked I'd approved 1,500 loans +/- most of them beyond his athorty.

He quit and the bank called me, I took the bank job. I had $1,500 limit when I left on a Friday, I started at the bank on Monday that Friday their board met and my second Monday I had portfolio authority, $5,000,000.00 just like the chairmen and he owned 80% of the bank.

Marines are trained to make life or death decisions, after that what's the problem making decisions over a few dollars?

Veterans may not be "experienced" in civil  jobs, but they are extremely well disciplined in decision making and responsibility.

It amazed me, too!

The only one I knew was the man I replaced, but the bank knew me. The job opened up a 10:00 am and they called me at 1:00pm. I bought a house and went to work in two weeks.

I did take all the AIB classes available that year.

Bill-I liked the line about clothes for the pleasingly plump. I've worn some of those at times.

I'll miss your fun, your knowledge, and your opinions Bill. R.I.P. and to you and your family and friends, you're in my thoughts and prayers. God Bless.

I just heard about your death...

I'm saddened for your sudden departure...

I never met you...but I had a chance to experience your candid spirit and helpful personalty every time you left a comment on one of my posts...

RIP Bill and my condolonces to all your family... prayers for them as I want them to know..he was respected and admired by many here in this community...

Is there blogging in heaven?  Well be waiting on your next post from above.

Bill ~ We crossed paths only a few times on AR back when I was active here, but you left an impression. It's sad to know that you're gone, but glad to have known you through your blog. A full throated Ooorah!

My condolences and prayers to your family.

It's been over a year since Bill's passing, and it still hurts. He was very kind to me, and it was especially important to me when I started on AR.  And he never lost this keen interest.

I believe he was one of the brightest people I ever met on AR. And it is sad he left us so early.

Really enjoyed this post and hearing about you life. Very interesting. You make some great observations and give sound advice. Have a great week.

Bill left an impression on me and I was sad to hear he was no longer with us when reading Jason Sardi's tribute to him. He was a person I saw as a true authority - no fluff, just the facts - a rarity in our world.

Re-read this post and do appreciate it have a wondeful week.

William J. Archambault, Jr.
Bill, wherer you hear me or not, I am coming back to you here on AR. It's been nearly 3 years. I always thought one day we will meet when you go to visit your parents... It was too sudden, too unexpected, and it left a void and 3 years later it is still here... It is your birthday. I donot know what I am supposed to say, whether Happy Birthday would be appropriate... 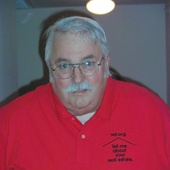