Bullis Charter School is not the same as Gardner Bullis Elementary

Although both are physically in the city of Los Altos and have similar names, Bullis Charter School is not the same as Gardner Bullis Elementary.  The two schools get confused with each other, but are very different.

To explain, knowing the history is helpful.  Back when the Los Altos School District Board decided on February 10, 2003 to temporarily close down the original elementary school which served much of Los Altos Hills (Bullis-Purissima Elementary), a group of affected residents sprung to action and started Bullis Charter School (BCS) to fill the void.  Even though BCS is physically located in the city of Los Altos (in the portable classrooms on a campus shared by Egan Junior High School), BCS is chartered by the County of Santa Clara.  BCS operates independently of the Los Altos School District (LASD).

Although BCS is technically a public school, keep in mind BCS is not a typical public school.  It is a charter school.  You are strongly encouraged to donate $5,000 per year per student.  For that, you get some aspects of school that you might typically get in a private school.  You get "Focused Learning Goals", full-time teaching specialists in the arts and sciences, a Mandarin language program, and optional after-school activities.  You need to enter a lottery to get in.    Originally, the majority of the students for BCS came from the neighborhoods in the attendance area of the school that was temporarily closed.  However, now only approximately 25% of the students at BCS are from that attendance area.

Anyone in the state of California can submit an application to attend BCS.  Enrollment preference, authorized by the Santa Clara County Office of Education, are as follows:

If a random drawing is necessary, SCCOE authorized enrollment preferences are applied based on the following hierarchy within each grade level:

1.Siblings of current BCS students who reside within the Los Altos School District (LASD) have first preference.
2.50% of the available openings for students residing in the former Bullis-Purissima School attendance area as defined by LASD in 2003 have the next priority.
3.Other LASD students have the next priority.
4.Siblings of current BCS students who reside out-of-district are given priority after that.
5.Out-of-district students without BCS siblings receive the final priority. 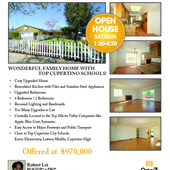 I recently attended a meeting to discuss school emergency preparedness. This topic has been on the top of parents' minds since the tragic massacre of school kids at Sandy Hook Elementary in Newtown, Connecticut. Here's some of what I learned in this meeting. In an emergency situation, the authorities need to account for every child. Parents would need to go throught he appropriate channels to retrieve their child from the emergency. Parents cannot just come and take their child without letting the proper people know because then the authorities will wonder what happened to your child and will divert resources to go look for your child. One of the middle schools in the Cupertino Union School District is designated as the central location for students in case of an emergency. That middle school is stocked with ample food, water, electrtical generators, etc. The authorities expect that in an emergency, most parents would take a break from their work to retrieve their child within 2-4 hours. However, if some parents continue to work during the emergency, they will be able to pick up their child from this designated middle school gathering point. There are 25 schools that would feed kids to that designated middle school in the event of an emergency. One of the officials at the meeting was instrumental at getting a $250,000 grant from Congressman Honda after a visit to Washington DC. Using that money, he subcontracted with a security company that devised a comprehensive $82,000 plan for school safety. That official is a personal friend of Carla Holdsclaw, the person who trademarked the terms "code red" and "code blue". Other schools, who don't have permission from Ms. Holdsclaw will have to use the terms "Full lockdown" and "Shutdown in place" instead. The biggest topic of this meeting was the discussion about whether a fence around the campus would be effective in preventing a Sandy Hook disaster. The cost of installing a fence for the 15 schools that don't have a fence would be in the millions of dollars. Some of the people questioned whether a fence would be effective in holding out a determined potential assailant. Another issue was in the event of a fire on campus, would a fence hold kids trapped inside with the flames, as was the case with the Brazilian tragedy where over 200 people perished. One of the officers brought up the idea of having more parent volunteers patrolling campus. He also urged parents to talk their kids about safety. The overall topic of safety in our schools will continue to be a hot topic for a while.