While there was a great deal of intra-day volatility over the past week, mortgage rates ended the week with little change, remaining near the lowest levels of the year. Most of the volatility in mortgage rates was caused by big moves in the stock market and by news from Ukraine. Since these events had little impact on the long-term outlook for economic growth or inflation, their effect on mortgage rates was short-lived.

Inflation expectations play a fundamental role in determining mortgage rates and influencing Fed policy. The low levels of inflation seen in recent months have been a major reason for the decline in mortgage rates since the beginning of the year. Fed officials have an inflation target of 2.0%, which they consider the optimal level for the performance of the economy. With readings well below this level for several months, there has been little pressure on the Fed to tighten monetary policy.

The two big monthly inflation reports released this week caught the attention of investors, however. Both the Consumer Price Index (CPI) and the Producer Price Index (PPI) revealed larger than expected monthly increases in overall and core inflation rates (core rates exclude the volatile food and energy components). Core CPI was still just 1.6% higher than one year ago, but investors will be closely watching these reports in coming months for signs of rising inflation.

Over the next couple of weeks, investors will be watching the housing reports, including New and Existing Home Sales. One question is whether the results for March will reflect that the weather returned to more normal conditions. The next Fed meeting will take place on April 30, and this is almost always a big event for mortgage markets. Finally, as was seen this week, changes in the situation in Ukraine could affect mortgage rates. 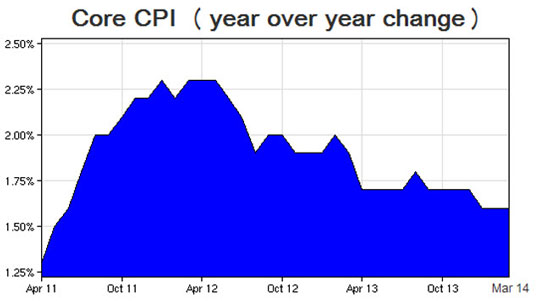