As I was taking picutures for a future blog post on the Brownstone Condos for sale next to Banker's Square, I turned around to see where the sun in the sky was and saw it shining on the old Howell Mi Depot, a museum operated by the Howell Area Historical Society and it brought on some childhood memory flashbacks. Growing up in Howell Mi, I was familar with trains and the tracks that ran behind our house about a block away.

So I went over and walked around the old depot, it looked better than I remembered. It has been a long time. I have memories of when it was a steam world, before the  Desiel Streamliners would come and take over but my memories  were  about steam, Here a few of them.                       THE SOUNDS OF A TRAIN AT NIGHTMy family moved to North Street,  second house west of Roosevelt in 1941, the year I was born. I'd grow up with the sound of the steam locomotives, because we were on the other side of the block with most of North Street lots running to the tracks.  I can still recall waking up and going to sleep to the sounds of chugging steam engines.At night, when an engine was taking on water near the rail crossing at Roosevelt, the sound of an idling steam engine was like a contented elephant, ker thum ker thum, on and on, then when the "drinking engine" had her fill, she'd begin with a hiss then a slow and rhythmic chuuuuug, chuuuuug, then 3 or 4, short and quick, chugg, chugg, chugg, chugs. Then again and again, each time quicker as the bemothe moved her long trail of cars up to speed. The rumble and rattle of metal on metal squeaks and groans had a language all of their own to me. And I would go happily to sleep knowing the train was somehow going on, fading finally in the night.                                      DON'T GO NEAR THE TRACKSThe kids in the neighborhood were admonished to "stay away from the tracks."  Well, come on now, what do kids do? Right, it was a HUGE thrill to stand close to the tracks, getting up close and personal to the train. It was a special treat when our small voices would shout out to the brakeman on the caboose, as the last of the train rumbled by, "Toot yer Whistle" and many times he'd smile and give us a quick "toot-toot" from a little lever he'd push. We'd laugh and feel happy and proud we did that.                                              FLAT PENNIESWe were told not to put anything on the tracks. "Might cause a train crash" a grown up would say. Fascinating thought to a kid. Trains were very important, I would later read, in the war effort, for little kids who went out to play on a summer day, it was a long day because we stayed outside and made up games to play, or watched the trains going to where, we had no idea . Of course we would sacrifice a penny once in awhile to get flatted on a track.  That was not the fun though, it was about not getting CAUGHT! I remember we would hide behind Charley Bonnie's garage watching as the many wheels of the train crushed our coin, and squealing with laughter,as we witnessed our "crime".  Then, when all was clear, train finally out of sight, we'd double check to see if anybody who might tell on us was around,  then we'd go to the scene of our "crime" and look for the flattened coin. And again we'd marvel at our "work" and then we'd go work on our secret club house in somebody's yard or garage an old table with an equally old bed spread to hide out.  On rainy days, our attic was a good place too, it had a back stairs and a lift up door. You could hear the rain on the roof and feel very comfotable in any make believe world you chose.                          WHAT DO YOU MISS MOST ABOUT LIVING IN TOWN Billy?In 1951, when I was 10, we moved. It was not far away but it seemed like far away, to Norton road. Dad and Mom bought about 100 acres with hills and a woods and even a lake with huge fish!  Really it was a great place, in the summer days ahead I would meet the girl I'd later marry, but that is another story. Dad had gotten into selling real estate and I guess that is how we ended up there. The house in town sold for about $3200.00 and the hundred acres cost $7500 on a land contract. No house on it yet, that is another story too.This story ends with the question mom had for me as we sat beside a crackle of the camp fire (we camped while we were building the house) on that summer of 1951. She asked me, " Billy, what do you miss most about living in town?"  I said, with no hesitation, "the sound of the trains at night" and I think her response was something like "WHAT, that's why we moved," only the sounds of the frogs and crickets could be heard for a bit then  then I said, "oh,"

Thank you to the Howell Area Historical Society for preserving this old station. To read more go to their link. 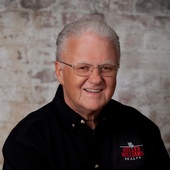