I am writing a series of blogs about my experiences in growing an organic container vegetable garden. I had been trying to get my plants healthy after being being sick and having to let them go a little bit. The tomato seedlings were a wierd kind of yellow light green color and I was tying to get those green.  I heard that epsom salt worked to help green up plants, so i tried it and it worked. They were starting to look really good, but not for long, thanks to fungs gnats. I have been struggling with fungus gnats for a while now.  They are little flying annoying bugs that can come from overwatering or can come in the soil when you buy it. They multiply like crazy, the larva grow in the top layer of your soil.  I started noticing them flying around when watering and then noticed two or three of them on my stovetop in the mornings. We keep a light on right above the stovetop at night and it attracts them.

I read that disturbing the top layer of the soil several times a day is really helpful in getting rid of the larva. I uses a small rake to do this. It wasn't difficult in the big containers but in the smaller pots it was really difficult.  I ordered Safer Sticky Stakes to trap the adults, and they worked great

and caught a lot of the adult gnats, but they were still around and getting really annoying.  I read that apple cider vinegar works in trapping the adults so I put that around is several places and got about four. I continued to use a small rake to disturb the top layer of the large containers and as best I could on the small ones and was still seeing a lot of them flying around when I did it and when I watered, and actually got several bites. I read that they don't bite but I got a couple of bites on my arms and a few on my stomach. I continued to look for a solution and found out about food grade Diatomaceous earth.  You sprinkle this on the soil and it kills the adults and needs to be used several times to really get rid of them.  I looked at Lowes an

d they did not have anything contained only Diatomaceous earth, they had other chemicals mixed in. The same for Walmart. So I decided to try the health food store. They had a product that was labeled Diatomaceous earth, but it said it was for fleas and ticks and it didn't say food grade. The lady there called the manufacturer and they said it was food grade and it was safe to use for plants.   I used it on the soil and some got on the plants. It is supposed to be safe to use directly on the plants so

I wasn't too conc

erned.  The next day the plants started turning white and yellow and losing a bunch of leaves.  I was not happy.

the house.  The weather was starting to get hot so I figured they would be ok. The next day I spent the day with a couple of my friends going to estate sales, thrift stores and when I got home, a lot of the plants were scorched from the sun. I was starting to get a little discouraged. 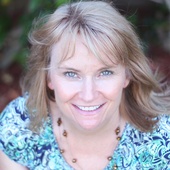