I had the good fortune to see Jimi Hendrix perform live four times. The first was at the Eagles Auditorium in Seattle in 1967, then two times at the Seattle Center Coliseum in 1968 and 69, and finally at Sicks Stadium (in the rain) on July 26, 1970.

The Jimi Hendrix Memorial is at the Greenwood Memorial Park Cemetery in Renton, Washington. It’s just a couple of miles from where I live. I drive by often because it’s on my way to and from the Eastside. (Newcastle, Bellevue, Issaquah, etc.)

A lot of my family friends and neighbors who’ve passed are also here at Greenwood. I stop by on occasion and holidays to say hello, give thanks, pay my respects, and sometimes drop by to say hello to Jimi. 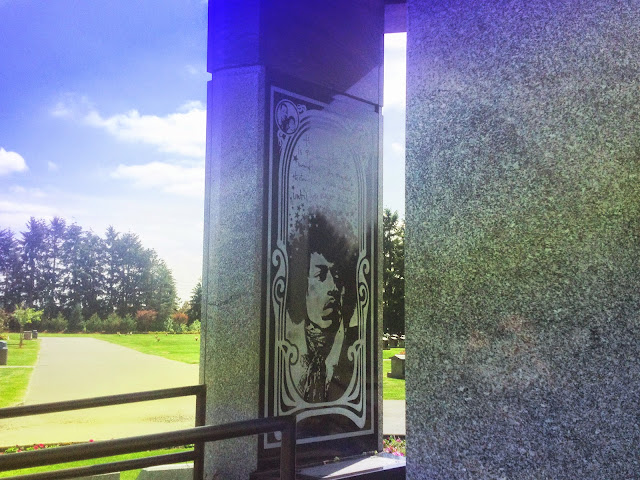 No matter the season, I have never visited the Jimi Hendrix Memorial without seeing flower bouquets, guitar picks and numerous candles and mementos left behind to pay homage. And there is always a fresh round of kisses for Jimi on the etched granite.

Having been a child of those tumultuous times and a guitarist, Hendrix had a profound affect on me and changed the way I’d think about the guitar forever. When I look back through the lense of today he doesn’t seem so wild and shocking as he once was to my parents when he first burst onto the American music scene waving his freak flag high. 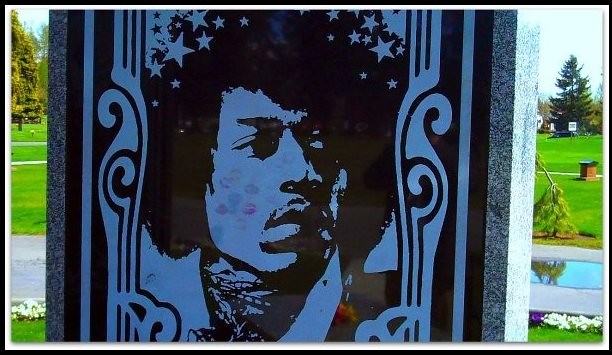 Dad certainly had his challenges with me back then and rightfully so. He tolerated a lot including long hair, the Beatles, the Rolling Stones, and the rest of the English Invasion. He kinda got the loud blues band thing a little, but when I put Hendrix on the RCA tube stereo console in the living room one Saturday afternoon in 1967 (not knowing he was home) and cranked Purple Haze up to 14, well, lets say that was a day in infamy.

Almost instantly his studio door slammed and I could hear the thunder of footsteps up the basement stairs. As he rounded the kitchen coming straight at me through the dining room (like he was reliving the Normandy Invasion) his verbal guns were ablaze with a deafening barrage of expletives and rapid fire references to the lord.

Needless to say, I quickly pulled the needle from the longplay vinyl. 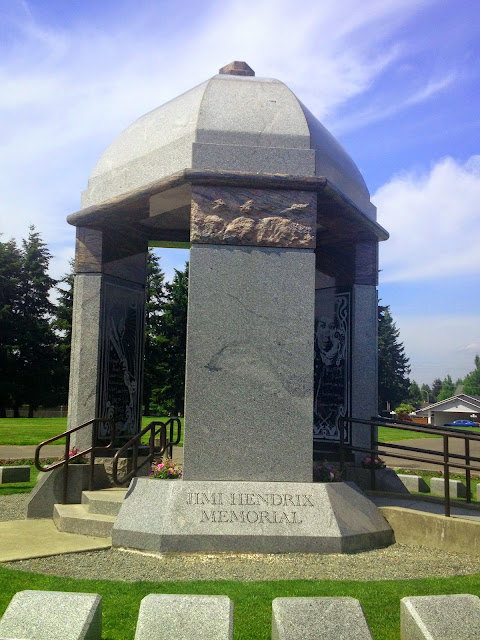 I’ve certainly mellowed with age and I never really got the whole psychedelic thing anyway. For me it was always about the music and self expression. I still enjoy Hendrix but my favorites now are more about his lyrical and less intense recordings like, The Wind Cries Mary, Bold as Love, All Along the Watchtower, Hey Joe, and one of the coolest rock instrumentals ever and of all time, Third Stone from the Sun.

I owe a debt to Hendrix, he widened my view and as a fortunate witness it rekindles internal fires and a moment or two of quiet reflection along my journey. Somehow I don’t feel so alone when I stop by to say hello and see fresh kisses for Jimi.

I had an opportunity to see Jimi before he died. He came out on stage and goofed around on his guitar for about 15 minutes. Most of the folks, booed and left. He stopped and said, "Now that all the plastic people have left, let's rock!" I was a very memorable performance.

Purple haze was in my eyes, don't know if it's day or night, you've got me blowing, blowing my mind, is it tomorrow or just the end of time?

Michael, awesome story! Where and when did that take place? I know for me, Jimi's concerts were something you'd never forget and what always amazed me is how much they sounded like the albums knowing they did some overdubs and some guitar tracks were backwards and/or the tape speed changed etc. Yet, there they were live, just the 3 of them, and it sounded awesome.

Saw lots of the names during those times. Missed Jimi and I certainly regret it. I remember buying Are You Experienced album and playing it a full speed ahead. Jimi could Rock.

Indeed Pete! Jam on! Thanks!

Yes Bill, like we were buying a home in Electric Lady Land ;O)

oh, rENE~you speak deeply into my soul on this one. Jimi Hendrix was one of those early inconoclasts in my music realm. I was a bit younger than you in those days of going to concerts like his, but I still radiate that same grasp of soul-changing music. I absolutely love the choices that you have made regarding his favorites as they're mine, too. Mary was his "girl" and I think I did some research about his love which spurned this song.

I truly feel like I'm one with you on this!

Yes, I agree Gayle, your are. It was so life changing. It wasn't about right or wrong, it was the voice, the message, and yes, the angst... But what gems were left to enjoy!

Rene, I made a visit to his grave (in the middle of the night) in 1976. I was still a teen and I remember getting home at 7am and thinking, boy I hope my parents do not catch me only find my dad out washing the car at 7! So busted. He actually was very cool about it.

I was not a huge Hendrix fan of his at first but learned to really appreciate him later.

In my later teens and 20's I played with a guitarist who could do most of Hendrix's tricks, so needless to say I covered a few of his songs. He actually owned one of Jimi's guitars that he burned.

In a very sad life event he ended up selling that guitar.

I too had  a real respect for Jimi the artist. He was a master of the guitar and I played it loud so I could hear each beat.

Jimi definitely put a heavy stamp in the Music Industry, a legend, for sure!

Donald... Great story! Wow, what a treasure it would be to have one of Jimi's guitars! One of my treasures is a rare Gibson poster from back in the day when he was playing an SG instead of a Fender Stratocaster.

Tamra... Indeed he did and it's funny that even today you can still hear his influence.

Rene' wow I never knew of this Memorial, Huge like He became after his death....amazing that you actually heard him perform live!, Endre

Hi Endre... It is ironic that Jimi actually became more popular after his death. The memorial was dedicated in 2003. Before that his grave was really close my folks. I always get a good laugh over the image in my head where Dad is playing old European songs and tunes from the WWII era on his accordion and Jimi just a few yards away wailing Purple Haze and Foxy Lady.