I almost missed the adventure of a lifetime!  I was invited to go sailing in the British Virgin Islands (the BVI) back in 2006. I really wanted to, but I was so steeped in new corporate responsibilities I almost decided not to go.

Fortunately for me, I wised up. Like duh!, “It’s the adventure of a lifetime!  Just when do you think another opportunity like this will ever show up again?" I decided if something so absolutely amazing as sailing the Caribbean in the BVI for 12 days was offered and all I could do was run a list of why I shouldn't or couldn't go, then I just totally, absolutely, without one doubt, really really really needed to go!

Janet and I flew out of Seattle and met the rest of our crew in Dallas, Texas. Then a flight to Puerto Rico and another to the island of Tortola in the BVI. We caught a cab at the airport (one of the scariest parts of our journey) to our boat in The Moorings, Wickhams Cay 2, Road Town.

Funny, I remember each hop as a succession of smaller and older aircraft. It was like time travel with visions of Six Days Seven Nights and Master and Commander.

I think I was in Tortola all of 20 minutes when (emotionally still tethered to my cell phone) I realized, "I'm totally unplugged and off the grid!" I powered it down and as I threw it in my backpack the corporate me shifted to the adventure. 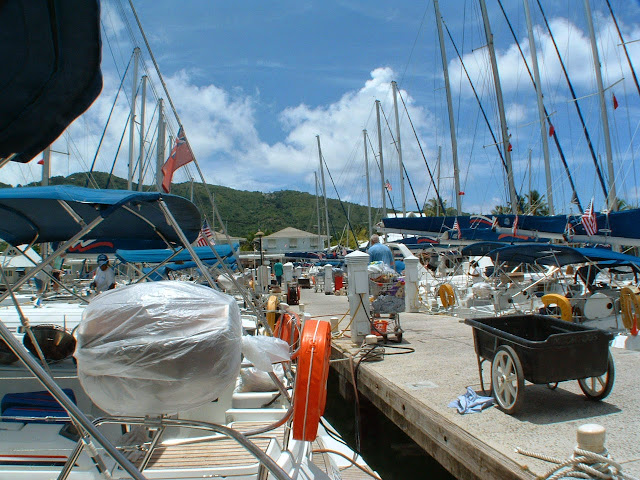 Little did I know how much I would soon learn about sailing or how much it would change my life. I was a shipmate now and though my talents were unknown and unproven (even to me) they would be needed and I would find them. 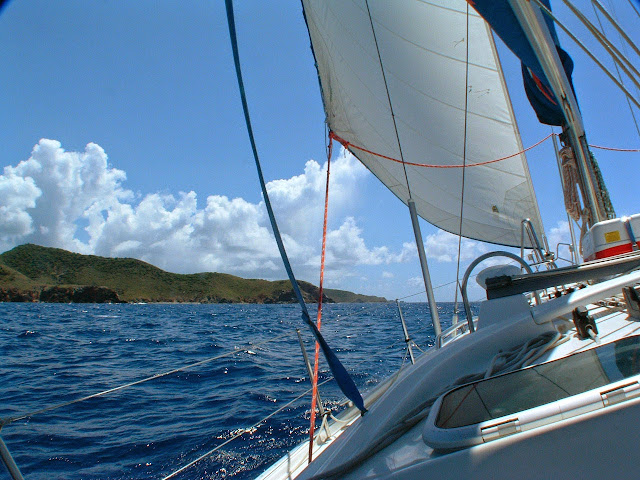 We attended a boat handling and safety class for a couple of hours our first day on Tortola then headed back to the Jorvik to stow our gear, check our provisions and make ready for sail. It was suggested everyone launch together that afternoon and stay in a group. But as we sailed out of Road Harbour we broke from the pack and headed across the Sir Francis Drake Channel for the Indians and Peter Island. For the next 12 blissful days we went island hopping our way around the BVI. 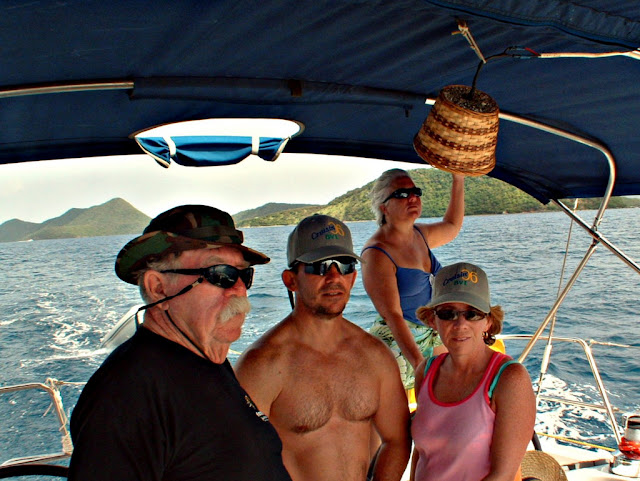 (Left to right) Arthur Brelsford, Captain Jeff Brelsford and his wife (in blue) Hilary and sister Janet Matzke. We've been sailing about a week in this photo and we've become quite the seasoned and adventureous crew. 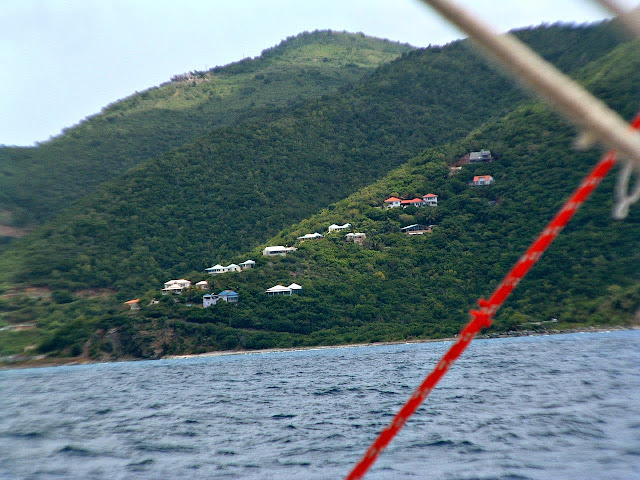 You'll find these little neighborhoods all over the islands. What an amazing life style! As I understand it, these are mostly summer homes for well to do Brits and others from around the world. 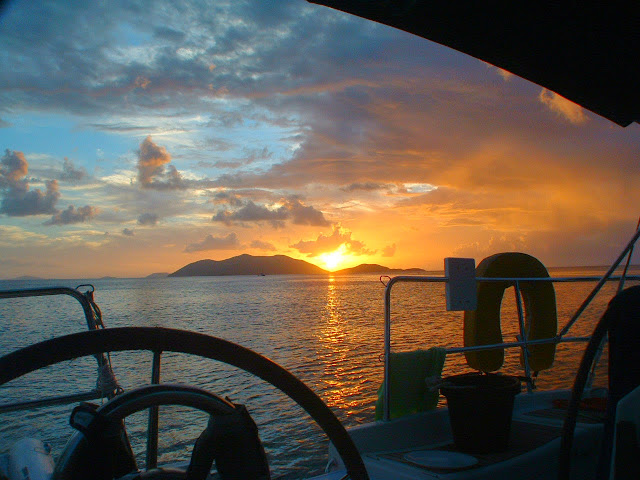 I saw some of the most amazing sunsets I have ever witnessed in my life here in the British Virgin Islands. The sky was so big and you could see all the way to the edge of the world.

You'll also find some pretty amazing private residences like this one in the islands... 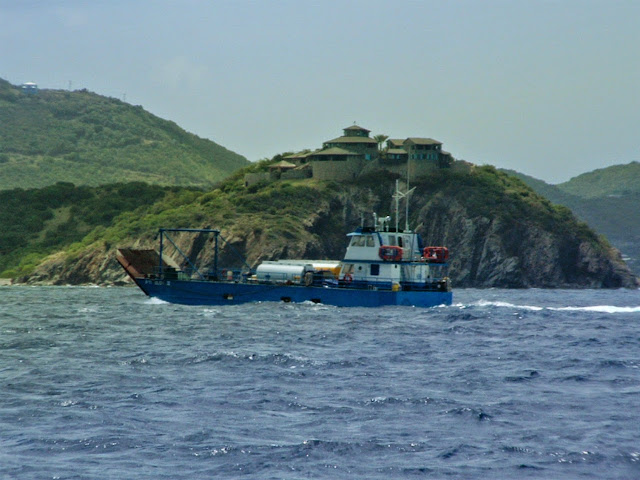 As with any adventure we had our share of close calls and a few surprises... One beautiful afternoon the wind picked up really fast out of no where. We were facing a squall coming right at us and had to make some quick maneuvers to get out of the way. 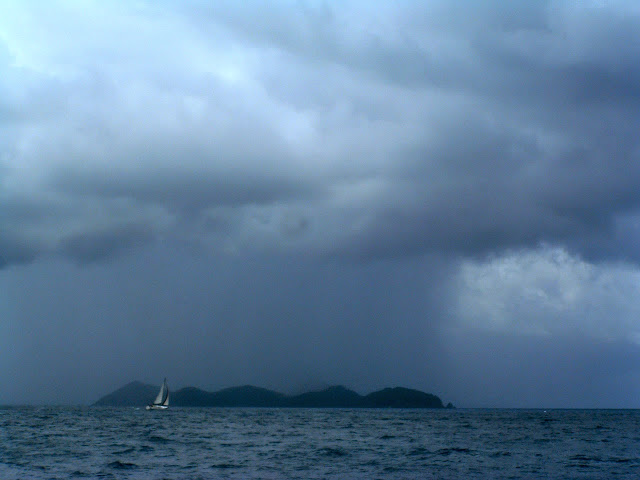 I'll never ever forget for as long as I live when Captain Jeff yelled a command to change the main sail. I was pulling rope with every bit of strength I had. "Pull!.. Pull damn it, pull!..", he yelled!

The sails were so full and taut, no matter how hard I pulled I was losing rope and we were leaning hard. My hands burned even through the gloves and my shins were brused and bleeding as the ropes had me dancing the deck. 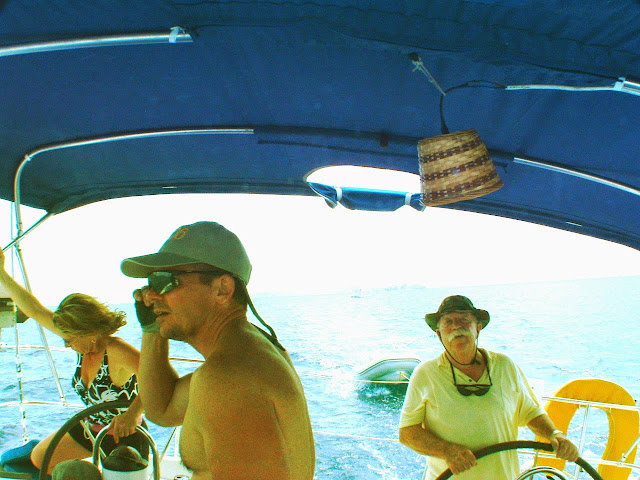 An instant lesson in teamwork and courage. We hussled like crazy, followed Captain's orders and through our total adrenaline rush together got the boat under control and out of harms way. 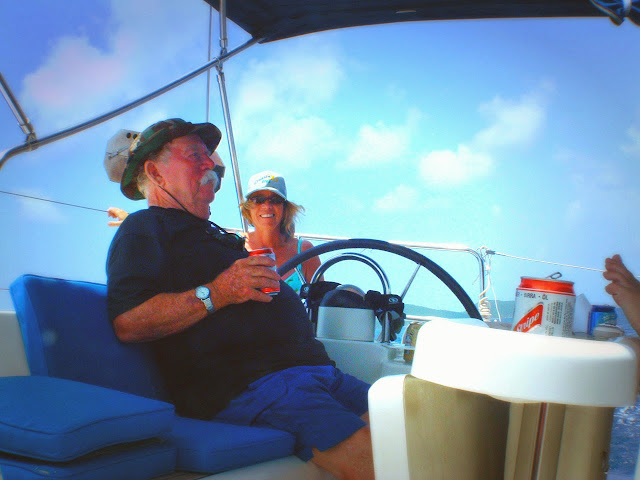 Of course, now that it's over and the sky is once again blue and the waters calm, it's time to kick back, have a brew and tell some stories! Isn't life amazing! 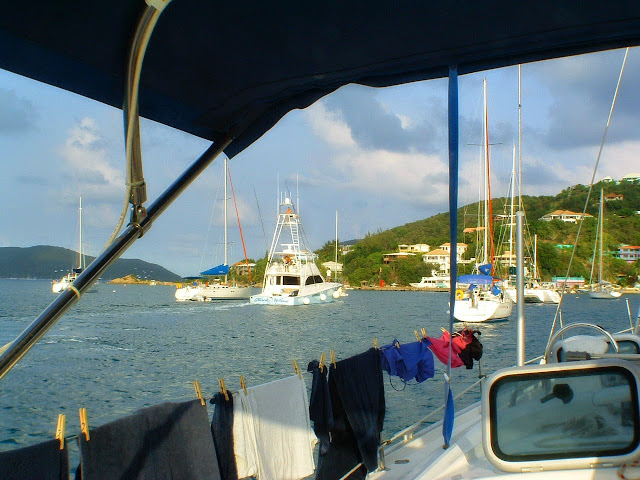 I think this is a call for celebration! The crew of the Jorvik is gonna do it up right today. We're taking shore leave... But before we do let's get ourselves and the boat cleaned up and do some laundry. 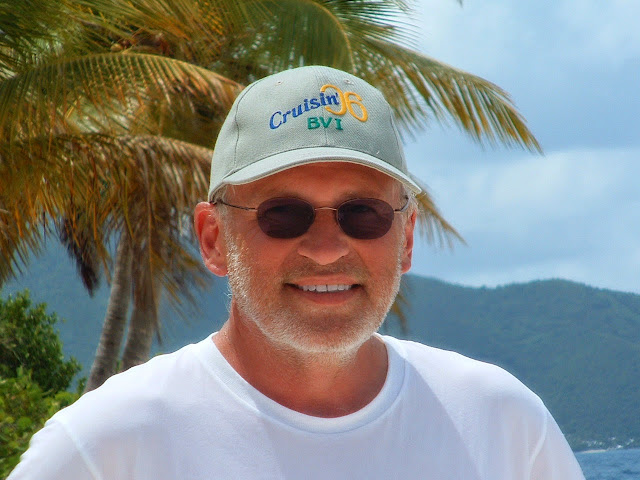 It was way more than a vacation. I never worked so hard in my life and called it a good time. You learn a lot about people on a sailboat at sea and most of the really important stuff is with very few words.

Sailing is about trust and cooperation. You don't sail a boat by committee. When you board you leave your ego in your duffle bag and do your best to learn the role you play that best serves the crew. There's a time for work and time for play. The only competition you have of any meaning is with yourself. 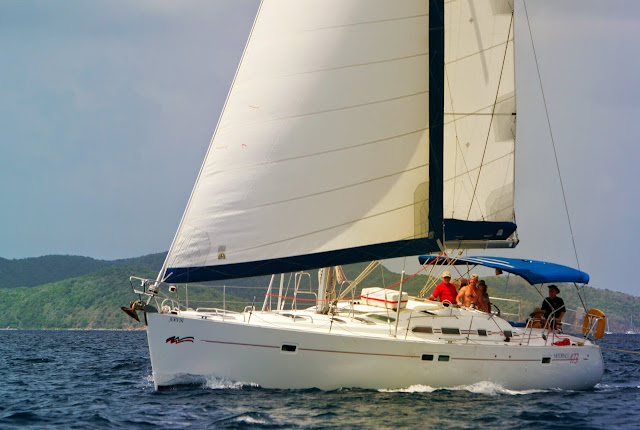 I hope you enjoyed my little tale of the sea... I often reflect on it and think if I ever ran a company like this we'd so totally rule! I made forever friends and mates and if it were somehow someway ever possible again, I wouldn't hesitate for a second to come aboard and sail away with you all again.

In loving memory of Arthur Brelsford (Sinbad) and Captain Jeff Brelsford (You're in my prayers. I hope you are better soon and set sail again). Hilary Wallace Brelsford (We haven't talked for so long mate and I so admire you and appreciate your courage. Bless you and thankyou and continue to take care of our captain!), and Janet Matzke, thanks always for being my friend.

Life's a reach and then you Jibe.

Groups:
"Whacked"!!!
EXPRESS WITH PHOTOGRAPHS AT ACTIVERAIN
Addicted to Active Rain
Photos
Travelers In The Rain

A... Agreed! And the trust is earned in real time through action. That's what makes it so cool! Thanks!

Would love to see more sunset sailing pictures, Rene! All of these photos were magnificent!

Rene-That was as good as one of the best episodes on the Travel Channel. Great photos although I'm surprised Capt Bligh allowed time for them.

Hi Wayne... hey, thanks! Captain Bligh worked us hard on occasion, but we'd pull into a cove and anchor and a few painkillers* later it was time for fun!

These were so yum, especially after a good workout sailing!

Great story Wayne.  I have bareboated in the BVI's some three times, most recently this past February.  Each time is a new adventure and we see and meet new people and of course the sailing is fantastic.  Hope you spent some time at the Soggy Dollar Bar!

Hi John... We didn't make it to Soggy Dollar Bar, but we were on the otherside of the island at Foxy's Taboo. Fun place and the BBQ was awesome.

Fantastic story Rene! Lessons in life and fun make it all worth while. Sounds like an amazing and unforgettable 12 days.

Good for you! I always opt for travel vs not travel. But that said...it's hard sometimes to find the time unless we MAKE it.

Hi Karen... Thanks! And agreed, MAKE THE TIME!

Rene`, you took me back in time. Gosh, this was such a beautiful post.

I sailed in BVI with an old beau and a married couple of friends around Christmas one year back in the early '90s. It was PERFECT for sailing. I snorkeled and swam next to a green sea turtle for about 15 minutes, just an arm's length away. I saw a baby octopus (they're very shy), squids, all in a chorusline, and a large manta ray. I think we even saw whales. I heard Jingle Bells in reggae so many times that it haunted me for awhile after I got back. We bareboated, just 4 of us. It was GLORIOUS. I even brought stocking stuffers and decorated the boat in Christmas decor! (I brought home a brain coral that I found on a beach,not knowing that you weren't supposed to do that. I still have it).

Thanks Gayle... I'd so like to think I could live here, and maybe it will turn out that I do. But I think not. I love my Pacific Northwest! But it was the adventure of a lifetime! I have to admit sometimes I'd like to have a simple business, like a little "Pain Killer" Tiki bar on the beach. But then again, I don't live there, so maybe that's locally complicated? Thanks so much for sharing your adventure there! It's such a special wonderful place!

Rene: a travelog to get me excited. I have been a sailboater for decades  and now am boatless. How I miss the freedom and the open seas.  AHHHH!

Rene`, I spotlighted you in my Tuesday Travelogue--now a weekly series. It's connected with my Travelers in the Rain Group. Check it out!

Hi Gayle... Thanks so much for including me in your Tuesday Travelogue! I'm honored!

Thanks for the great blog and pictures it really makes me want to untie the boat and get out there again.  There is a saying about flying "That time spent flying is not  deducted from the span of ones life" and I completely believe that sailing is the same way.  The two activities are connected, sails are just vertical wings, well atleast to me anyway.  Thanks again for the wonderful blog.

Thanks for sharing the terrific photos.  The British V.I. are beautiful!

Hi Steve... I agree. There's something magical about harnessing the wind by sail that's so magical!

Dee... Thanks! I agree, one of the prettiest places I've ever been.

Great insight today!  Thanks for the great read.  Can't wait for the next one.  Liz in Chandler