Those of you that know me and my musings online know I like to write a lot about my local surroundings here in the Pacific Northwest. I also like to share technology and online resources I find and use and thoughts about the evolving social web.

But over the past two or three years especially, my online conversations about people and places, local events and history, and my travels have produced the most interesting discoveries, engagement, and opportunities for personal and business connections.

My conversations about the Renton Library, The Library over the River, got me a phone call from 93 year old David Johnston, formerly of Johnston and Campanella Architects. The firm designed and built many area schools, shopping centers, and commercial buildings. They won several awards for their clean modern designs and forward looking esthetic. Mr. Johnston was online searching for information about his favorite project, the library and the politically charged and controversial conversation about closing it down and moving it . Who'd he run into online? Me and my posts about it, so he called me. 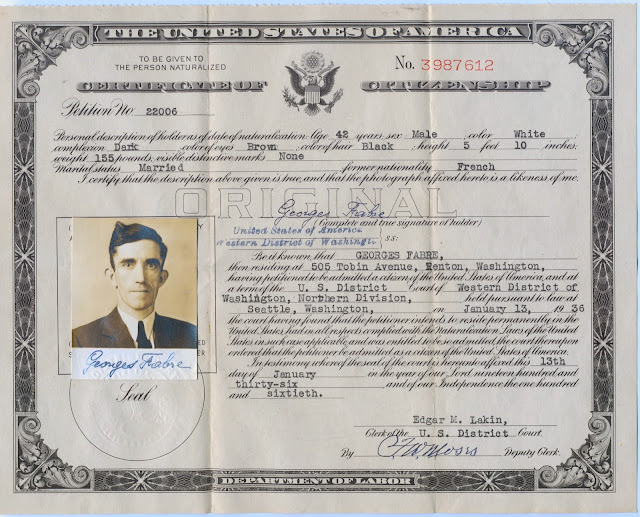 I’ve talked about growing up in Renton in the 1950’s and 60’s and no history of that would be complete without including my grandparents, George and Pauline Fabre. These writings would lead me to discover that the Louise Fabre Joulia who lived in Black Diamond (1903 - 1912) was in fact my Grandfather’s sister. I didn’t know that. She lost two husbands and returned to France. The Renton Historical Museum aware of my writings online pointed the way to a post on the Black Diamond History Blog about Louise and they also informed me that a relative of hers was searching for Fabre's from Renton hoping to find relatives.

Within a month Maima Gaudfrin, who lives in Tahiti, found me online. Louise Fabre Joulia was her grandmother. We connected on Facebook and after several converations about family members and exchanging photos, I have a second cousin I never knew about. 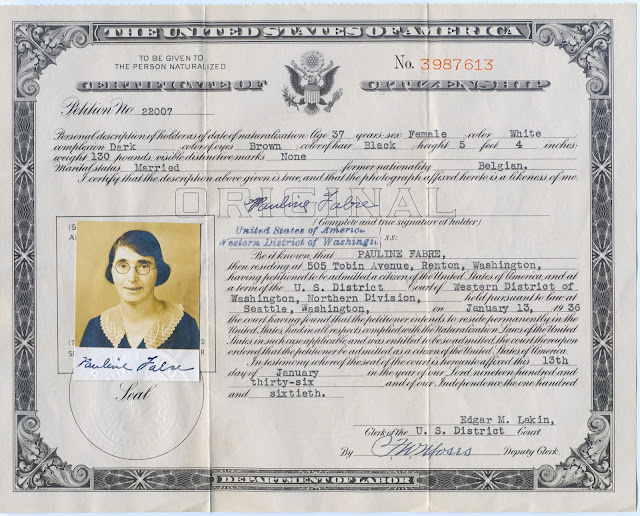 I have several stories of connection, but the most amazing one just took place a few weeks ago. I was leaving the Renton Fred Meyer store and walking across the parking lot when my phone rang.

You don’t know me from Adam, but I think I have something that belongs to you.” 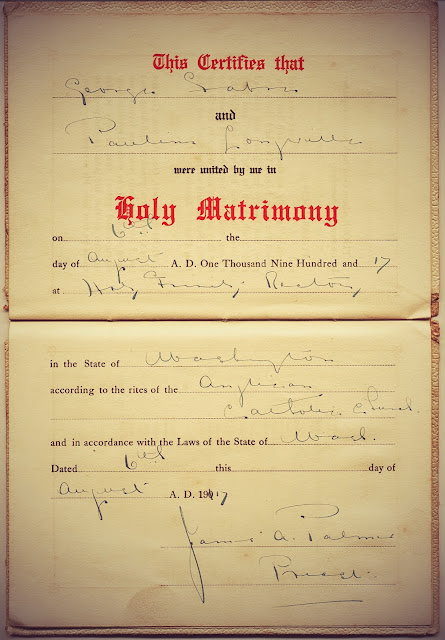 As it turns out Brent lived at my grandparents house for a few years. He was moving out when he discovered two metal boxes behind a closet panel next to the chimney. After searching online at sites like Ancestory.com and History.org with no luck he decided to simply Google ‘George and Pauline Fabre' to see what he might find and as he put it, "You showed up everywhere."

So now that Brent found me he asks, "Where are you?" I reply, Fred Meyer in downtown Renton. "So am I. I'm just checking out now. Can I meet you in 5 minutes?" Sure, see you in the parking lot. I'll be standing next to my Ford Explorer by the north entrance.

Wow, just how weird is that?.. A few minutes later here comes Brent and he hands me the two metal boxes. We shook hands and chatted for several minutes. I felt like a little kid. I wanted to be sure he knew he had the right person so I was going for my drivers license when he gestures me not to bother. "No worries, I know it’s you," he smiles. I’ve seen you everywhere online.

When I got home I put the boxes on my dining room table and paced around and stared at them for the longest time. I kept saying to myself, how over the top amazing is this! What stars had to align themselves for such a thing to happen?

There’s so much about my family I’ll never know. I remember many stories but I’ve forgotten a lot of the details about those early days working the coal mines, the old timers and family, their friends and neighbors, and the epic journeys they all encountered getting here from the old country. 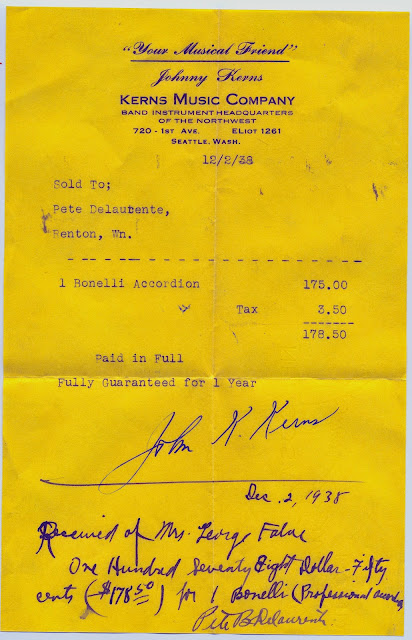 It turns out the two boxes are full of old personal papers and documents like their certificates of citizenship, their wedding book from August 6, 1917. Several receipts of purchase like Grandpa’s 1949 Chevrolet and a Bonelli accordion bought on December 2, 1938 for Grandma Pauline’s step brother, Pete Delaurenti.

I bet, knowing them, the accordion was a family purchase and several members put their money together to buy it. So typical of those times and I'm sure it was Grandma who was put in charge of the transaction and she and another family member or two took the trolley to Seattle and paid cash for it.

After all these years, who would have thought a day would come out of the blue and I'd get this call, and the caller would be within 50 yards of me and 5 minutes later he'd walk up and hand me such a precious family treasure.

Only in these times...

That is an amazing story and I am so happy for you. It also goes to prove that blogging and sharing can bring precious treasures ones way.

Hi Martha... The whole thing is over the top in my mind. I get being online and connection, but this one was an epiphany for reals!

Rene, there is no way our grandparents would have thought that their personal papers would be shared with a whole bunch of blog buddies!  This stuff is great.

Hi Pat... Indeed not, that's probably why it was in the wall. They didn't even use a safety deposit box at the bank.

How wonderful, and it is fun to know our ancestry...My mother and I were going to write a book about my father's side of the family, and now she is gone...perhaps, I will do it one day.  A

A... Thanks. I want to write more about the family, before I forget most of it :-) There's so many questions I wish I would have asked, but then again I was a kid then...

Rene, what wonderful connections have resulted from your online activities.   Thanks for sharing such an interesting story.

Mannnnn, another example of the infamous "small world", plus now, the power of Google...

That is amazing, Rene.  That man really handed you 2 treasure chests.  Most people will never have those amazing documents from their families.  You are blessed.

Hi Don... Indeed, 2 treasure chests! And who would have thought all these years later!

Rene' not to digress I loved your post of the Library over the River...then your followup with connecting with the Architect...now this post just reminded me I have three certificates like you posted on top, My Mother's, My Father's and My own:))), Endre p.s.My father was the proudest American you ever would have come across in your path....

Endre... What a hearfelt and heart warming comment! Thank you so much. My grand dad was so very proud too! To think that he came here in 1912 and it took until 1936 to receive his papers. I have so many fond memories of finding him out back by the garden on a summers afternoon with his friend and neighbor Fred Marchetti, an Italian. These two old guys having a glass of wine and some crackers, bread, and cheese arguing politics! They were such a hoot and cared so much for the dream that is America! Thanks again!