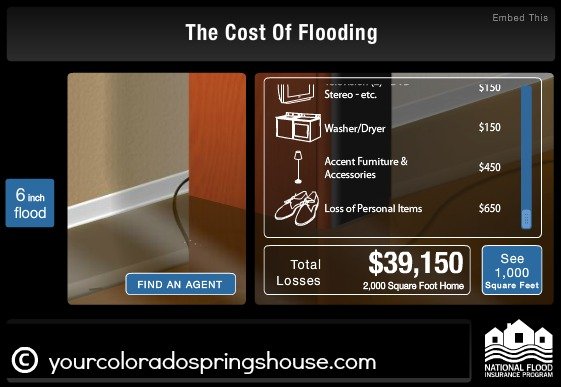 [Flash] Floods could happen any time

With the catastrophic flooding across the state of Colorado in 2013 and wild fires increasing the risk of flooding in areas below the burn scars across the state, now is the time [again] to talk and think about this increased risk – and possibly about flood insurance.

In 2013, it was estimated that over 20,000 structures were damaged across the state in the September flood event. Of those damaged structures, only approximately 2,100 building owners had a flood policy with the National Flood Insurance Program to assist them in rebuilding after a catastrophic flood. Over half of the 2013 NFIP claims were for properties in a low to moderate risk flood zone. If you are considering flood insurance, now is the time to think about it as flood insurance has a 30 day waiting period before submitting any claims.

Towering snow-pack and frozen rivers are more than just a reminder of the bitter-cold winter–they’re a flood waiting to happen. Residents need to prepare now for the possibility of flooding as the mercury rises.

During the spring, frozen land prevents melting snow and rainfall from seeping into the ground. A quick spring thaw can produce large amounts of runoff in a short period of time.

Each cubic foot of compacted snow contains gallons of water. With nowhere else to go, the melted snow runs off the surface and flows into lakes, streams and rivers, causing excess water to spill over their banks. Excess mud and debris from Colorado’s wildfires across the state increase the risk that those stream channels won’t be able to handle the normal spring flow as in past years.

Add rain storms to that mix, and the result can be serious, spring flooding. Many rivers also froze this winter. When a rise in the water level or a thaw breaks the ice into large chunks, these chunks can become jammed at man-made and natural obstructions, resulting in severe flooding. Click the handy app below to find out how much a flood could potentially cost you. Find out more about the National Flood Insurance Program NFIP at floodsmart.gov

Here is an interactive flood map.

If you’d like to see how much a flood could cost you please try out this tool:

That sounds like quality info for the consumer.  Have a great week.

Colorado Springs is such a beautiful place and I am blessed to live and work here . Would you like to know more about Colorado Springs? Are you interested in the different neighborhoods? School districts? Do you own or rent? Please don't hesitate to contact me and I will be happy to answer any questions you might have. If you have questions about Ft. Carson or Peterson Air Force base I'll have answers for you as well. We retired in 2012, which actually seems like yesterday, and prior to that I owned a very popular blog that specifically dealt only in PCSing! Just contact me via email, FB or Twitter, I will get back with you as soon as I can.