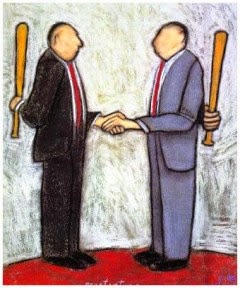 Last week, we shared part 1 of our list of 21 negotiation strategies that will help you close any deal like the best sales pro in the world.  Today, we cover 11-21.  We hope you find these helpful whether you're negotiating a sale with a customer, a price on a new car, or even negotiating with your spouse where to go on your next family vacation!
By the way, if you do it right, you're negotiation won't require a baseball bat like in this photo!

11. Ease their pain.
Know their pain points and show them that you’re genuinely trying to alleviate those. They’ll appreciate it!
12. Negotiate small to big or big to small.
Depending on how strong your position is and how much leverage you have, you may want to negotiate the biggest item first (and everything else will logically fall into place after that.)  Or if you have a hard sell in front of you and want to break the ice, get them to say ‘yes,” to several tiny, almost inconsequential items first.  So what if you and the car dealer are $20,000 apart on the asking price – you negotiated the cost of the floor matts, the stereo system, and know your color is in stock!  Believe it or not that helps keep the ball rolling.
13. Float a balloon and then pop it.
This is a fantastic tactic early on in the negotiation or to earn someone’s trust you don’t know.  At some point, propose something, but then immediately take it off the table, explaining that it makes no sense for them and you wouldn’t even consider it if you were in their shoes.  They’ll be pleasantly stunned that you’re thinking of their best interests and looking at things through their viewpoint, and the rest of the negotiation will take on a more favorable tone.
14. Timing is everything.
Don’t just reach for your desired outcome today, but keep an eye toward the future.  If you think you’ll want (or be deserving of) a pay upgrade six months from now, ask for a performance review then based on certain performance targets or incentives.  On the other hand, if you want to lock in favorable terms, then ask for a long-term contract.
15. Watch your body language and tone.
Remain open and neutral with your body language, avoiding defensive or aggressive positions.  Likewise, keep a cool, calm, and friendly, and even tone.
16. Meet at your office or a neutral location.
Human beings are territorial like any other animal, no matter how much we think we’re evolved.  By meeting to negotiate at your office, your home, or a neutral location like a coffee shop, you’ll establish a subtle shift in power, or at least take away their unspoken advantage.
17. Silence speaks loudly.
We talk too much.  Especially when we are nervous or stressed or trying to convince someone, we tend to open our mouths and blab.  So when you first propose a price or salary or whatever number it is you’re negotiating, say it and then close your mouth and shut up. Don’t say another word until they say “yes,” “no,” or ask a specific question.  They may hem and haw, and you’ll have to resist the overwhelming urge to jump in, but you’ll be amazed how silence is your best ally in leading them to a concrete answer.  By speaking, you’ll only let them off the hook.
18. Listen. Really listen.
Most people listen with the intent to speak forming in their heads.  Instead, actively listen to your counterpoint during a negotiation.  Focus on what they are saying, encourage them with non-verbals like shaking your head, look them in the eyes, jot notes, repeat key points back to them, and ask exploratory questions to get deeper into their pain points, goals, and desires.  They art of listening will help you close a favorable negotiation a million times more than anything you could say.
19. Keep a 10,000-foot bird’s-eye view.
Too often, we become fully engaged and embattled in the little stuff, without stepping back and looking at the big picture with perspective.  As you negotiate, be sure to ask them about their ultimate goals with their business and what they’re trying to accomplish.  Refer back to those goals often as you delve into the negotiation, showing how you’ll help them reach them.
20. Reach safe plateaus.
As you negotiate, establish psychologically safe resting places where everything is agreeable and you can move on.  Think of mountain climbers setting up a safe base camp for the night to rest before moving on.  So ask them if everything looks good and is fine and agreeable so far, and if you get their confirmation, you can move on with a great foundation to build on.
21. Bring in a third party.
If a negotiation stalls it might not be because they don’t want to close the deal, but that you just can’t offer what they want.  Instead of walking away, think about bringing in a third-party to offer exactly what you are missing.  A win-win-win is just as good as a win-win!  Think of this like baseball general managers bringing in a third team to make players and salaries match up during a trade.
Like favorite_border
favorite_border 0
Re-Blog
repeat 0
bookmark_borderbookmark