Why Winthrop? An Interview with Local Resident and Photographer Richard Honan

Winthrop is such a beautiful place to photograph, whether it be on the ocean facing side, with the harbor islands, the jetties and breakwater along with the broad beaches and also the everyday beautiful sunrises. The other side of Winthrop faces Boston, with lots of small boat activity, Snake Island and beautiful sunsets that change with the seasons.

How did you first get interested in taking pictures?

I started taking my camera along on my early morning walks with my dogs. I like to record the beautiful sunrises breaking the horizon everyday. Each one different, changing with the weather and the seasons. Many people never see this time of day. I am strictly an amateur photographer, using a simple point and shoot camera. The technology today allows even an amateur like myself some very nice photos.

I have noticed that many of your pictures are of the waterfront. You shoot the same places but your pictures always have a different focus. How do you accomplish this?

Everyday my subject matter basically stays the same. What changes is the lighting, the beautiful cloud formations, the breaking waves, the mirrored reflections on a still calm day, the flight of the seagulls, the ships entering or leaving the harbor, maybe the airplanes landing or taking off from Logan Airport. Some days I have to say to myself, “where is today’s photograph?” It might be the clouds reflected in the wet sand, the small foot prints of a child left in the sand or a pair of running dogs silhouetted against the rising sun.

Can you please send me 2 pictures of your choosing?

You also own a sign company in Winthrop. What made you choose to work and live in Winthrop?

I was born and brought up in Winthrop. My family has always has had several small businesses in town, ranging from my father’s gasoline station, a gift shop, selling fruit and vegetables along with a small nursery business selling flowering annuals, perennials and vegetable sets.

The only time I ever left Winthrop was in the late 1960’s to join the Army and go off to Vietnam. Previous to joining the Army, I had attended a small art school studying commercial art. Following my release from the Army, by chance I was asked to make a couple of small signs for a family friend. The rest is history. It is now forty two years that I have owned Richard Honan Sign Company. Success is measured in many ways, financial just being one of the ways, but more importantly family, community involvement, sharing your success and playing it forward. I have taught ice skating to children, adult sailing lessons and I have also taught beach glass mosaic classes, I have been a spin instructor at a local gym, I lead a Proposition 2 1/2 campaign to raise $3,500,000.00 to keep the Senior Center and the local library open. For the past twelve years, I have run a program of sending care packages overseas to men and women serving with the United States Military in Iraq, Afghanistan, Turkey and Africa. I have personally sent over 30,000 pounds of goods including Christmas trees, along Christmas presents to every Winthrop resident currently serving in the US Military. I am proud to call Winthrop my home town.

You made the welcome to Winthrop signs that are at the 2 entrances to Winthrop as well as the sign to Belle Isle Seafood. Do you have pictures I can share?

As long as I can remember there has been someone from the Honan family contributing artistically to Winthrop. How long has your family lived here?

The Honan’s located here in the early 1900′s from Fall River.

You also send care packages to the troops. How did you get involved?

I started this program of supporting our military men and women in Iraq and Afghanistan about twelve years ago in mid 2002 with a young girl by the name of Kelly Kneeland. I had seen this young woman grow up and go from kindergarden, grade school and then onto high school with my daughter Christine. Kelly graduated Winthrop High School and then went off to study nursing at Syracuse University. While studying at Syracuse, she became a member of ROTC and was commissioned an Army Lieutenant. When the second Gulf War broke out in Iraq in 2002, she was off to Iraq as part of the initial invasion force.
Being an Army Vietnam Veteran myself, I remembered not only the danger of war, but also the loneliness of being away from home. I took it upon myself to write to her and send her a care package every month for her entire deployment. I sort of adopted her and kept her under my wing until she came home. Kelly was no sooner home than I connected with another soldier , which led to another soldier, to another . . . . . one soldier came home, another one led to two more and so on.

I typically ship 400 – 600 pounds of goods(approx twenty five or thirty boxes) to Afghanistan and other countries in the Middle East every month. In the tthirteen years that I have been doing this I have shipped over 29,000 pounds of goods. I have to be thankful to all the individuals and groups from Winthrop, Revere and East Boston that donate goods on a regular basis. Postage alone can run over $500.00 a month.
Who are these men and women? They are your father, your brother, your niece, your aunts and uncles. They are Soldiers, Marines, Sailors, Airmen and Coast Guardsmen. I typically write a letter and send a care package to each of them every month for their entire deployment or until they come home. Right now I have four from Winthrop and the rest are from Quincy, Methuen, Lowell, Texas, Pensacola, Buffalo, New York City, North Dakota and beyond. I have met a few of the soldiers from Winthrop, but the rest I will probably never set eyes on or actually meet. They all have some sort of roots to Winthrop. Like I said, they are your nephews, uncles, aunts and brothers and sisters. I get their names from friends of mine at work, the local chamber of commerce or maybe from my yacht club. I like to think that I can put a smile on their face, a smile in their heart and a smile in their stomach.

If someone would like to volunteer to help how should they get in touch with you?

From taking and sharing your photos of Winthrop on Facebook you have started selling calendars, pictures and mugs featuring Winthrop. Why do you think so many people are interested?

Many of the calendars or coffee mugs are bought by people that like to see what I see through my eyes. Hundreds of these calendars and coffee mugs are sent as gifts to former residents of Winthrop living all over the world. I know that I make a lot of people homesick with my photos of the beaches, the sunrises and the water tower(Winthrop’s Motif #1).

Is there anything else you would like people to know about you or Winthrop?

Winthrop is nice seaside community filled with people like me who enjoy living along side the ocean. It’s an easy commute to Boston with it’s museums, restaurants, colleges and some of the best medical facilities in the world. But, mostly it’s made up of hard working individuals who want a good place for their children to grow up. Lots of good things are happening in Winthrop, new schools, a new harbor ferry to Boston, small scale waterfront development and a vibrant arts and theater community. 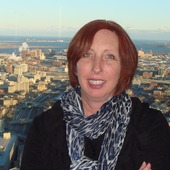 ActiveRain Community over 7 years ago
bookmark_borderbookmark
What are my Options if my Appraisal Does Not Come ...
View more Recent Posts   arrow_forwards