To real estate and mortgage industry professionals, use of the term “points” come naturally. In fact, this term is such an oft-repeated part of their vocabularies that it is recognized by many outside the industry – based on interaction with real estate agents and mortgage representatives – as an important word to remember and, when the occasion arises, repeat in an attempt to appear credibly knowledgeable about the industry when conducting their own business without assistance from a real estate or mortgage professional.

But what are points? Better yet, since this term is often expressed in the plural, what is a point? The latter is a better question; one that is often asked – and should be asked – by those who desire a substantive answer. It is a question and answer which will be discussed in detail throughout this article. Most basic among answers to the “what is a point” question has been: “One point is one percent of the mortgage amount” in a home purchase or refinance transaction. But this is hardly the complete answer to such a question, although it is not incorrect, though only partial.

A more precise answer to the “what is a point” question would begin with a correction, by replace the shortened term “point” with the more accurate and regulatory observed term “discount point,” which is defined as an amount paid to “buy down” the interest rate on a particular mortgage loan. Discount points are measured as percentages of the mortgage amount, meaning that one discount point is equal to one percent of the mortgage amount as stated in the above definition of a point; but since an origination fee is also referred to as a point, the two must be differentiated by their correct terminologies to avoid the confusion that can exist with use of the word point(s).

Furthermore, the mortgage lending and brokering businesses consist of so many different fees that are determined by percentages that it could be quite confusing to the average home buyer, or refinancing home owner, to describe each one as a point, two points or three-to-five points – depending on the specific circumstance – even though such simple expressions might seem less bothersome. In other words, it's rather easy for a mortgage broker to say, “my fee is one point;” but what does it mean to the borrower without an explanation?

A charge (cost or fee) that comes to mind is the state mortgage tax paid by mortgage borrowers in the state of New York; it's a tax which equates to one and three quarter percent (1.75%) of the loan amount, levied on mortgages closed in the five boroughs; and three-quarters of a percent (.75%) on mortgages closed in Nassau and Suffolk counties. Expressed in terms of point(s) these “mortgage tax” amounts would be 1.75 points and .75 point respectively. But neither is, in any way, a discount point.

A real estate agent's commission could also be expressed as points, since it is based on a percentage (ranging from 3% to 7% generally, and can be as high a percentage as the seller and agent negotiate) of the property's selling price. However, you will seldom hear a real estate agent refer to his/her commission in terms of points, because commissions are not discount points, nor are they related to the mortgage which a buyer might eventually obtain to complete the transaction of that property. So it is important to understand the difference between what can be, and is generally referred to as, a point; and what a point is in its truest form.

A closer look at the use of discounts points by mortgage lenders in the daily operation of their businesses will provide a little more insight into how the proper use of discount points can help smooth the way to a satisfactory mortgage loan transaction, depending of course on the mortgage type (Conventional, FHA, VA), transaction type (home purchase or refinance) and the particular lender. Proper use of discount points can mean the difference between affordable and uncomfortably high mortgage payments; or the difference between reduced closing costs and having to borrow from family members to complete the closing.

Mortgage interest rates change on a daily basis, and sometimes several times in one day. This volatility in interest rates would put lenders in a financially precarious situation had it not been for the availability of certain safeguards they can employ to, prevent operational losses in the face of ever changing interest rates.

One such safeguard is the use of discount points to hedge against loss once mortgage money is committed to borrowers at prevailing rates. Under this scenario, a lender would issue to the borrower a mortgage loan approval (or commitment), at 5% pursuant to a condition that the closing rate will be set three days prior to the actual closing date, at whatever the prevailing rate of interest is at that time; but in either event the commitment will expire in thirty days.

However, on day twenty the buyer is ready to close, and the prevailing rate is now at 5.5%, even though the buyer still wishes to close at the 5% rate reflected in the commitment. If the mortgage is FHA-insured the buyer may be required to pay one discount point in order to bring the rate down by one half of one percent (an option known as a buy-down) to close at 5%. In this case the rate was not “locked-in” and the lender was not paid a fee to guarantee the rate. So the borrower would have the option of closing at the higher rate or paying one discount point at the closing table to “buy down” the rate by a half percentage point.

Thanks for the post Jamie.  It is a complex question and without a mortgage background it is very hard to understand.

@ Pamela - thank you for your response. You are correct. I've been asked about points a lot lately and people seem a bit more interested in paying for a lowered interest rate. This was not common in years past.

Jamie, I had no idea the term 'points' applied somewhere other than ActiveRain! Thanks for teaching me a bit about this! 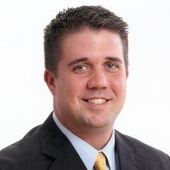 Mortgage / Finance about 8 years ago
bookmark_borderbookmark
What makes Interest Rates go up or down?
View more Recent Posts   arrow_forwards