We Just Moved In,

This Spot Wasn't Here on Thursday!

In all the years of working in apartment communities throughout Sacramento, this is something a bit out of the ordinary. It's not that water damage in the ceiling of an apartment is unusual, it happens quite often. I get calls for water damage repair in ceilings all the time. This was strange because the tenant just moved in and then the spot appeared. It wasn't there last week when the painters were there. No discoloration, or wet spot, or anything. Any moisture would be coming from the unit above.

So it is time to open it up and find some answers to this mystery spot. A spot that not only was wet but already turning black on the surface. So how do I go about finding out what happened? First, we open up the area of drywall that is discolored.

There are many things to look into here and until it is opened, I would only be speculating. But I do have some educated guesses. Repairing drywall that is wet from leaking for many years has giving me some common causes for the damage.

I will need to talk to the tenants above for some clues, it may be a shower that doesn't get used regularly but has been lately. One thing I an convenced of; judging by the discoloration this is not the first time that it has leaked. My guess is that the area was cleaned up and paint a while ago, the new water source brought the black growth back to life.

You can't cover up a leak with new paint. It'll just come right back!

Good morning Tom. This one hits too close. I have a new roof and yet water damage by a skylight that just occurred one day too. The contractors can't determined the reason and they need to before fixing the ceiling.

Tom - strange.  Perhaps the unit above has been unoccupied for a while.

Those ceiling stains are a sure sign of problems that need to be resolved. And, the mold could certainly become a health issue.

Hello Tom,  funny how things like this happen, luck you are the guy to take care of it.

Yes no way did that just appear.  That is a growth that takes time to take root especially to that level.  Appears to have been a cover up which is not allowed!  Disclosure is expected!

We lucky to have investigators like yourself out there that know how to track it down. Thanks,   JC in Vegas

Tom, the dreaded black growth. The "M" word that no one wants to say. I know you will get to the bottom of the source and get it corrected.

Hopefully it can be fixed quickly before the tenants decide to move out. I know of an investor with a rental home that continues to have water leakage problems and he can't keep a tenant for very long.

Oh goodness!  Yup this is great info...I have seen this 'come to life' with a couple of rentals we have. Not pretty...in fact, pretty darn scary!

Tom -- Looks like the cover up wore off or was reactivated by increased moisture. I'm sure you'll get to the source of the issue.

I am guessing the owner thought a little product like Kilts might cover the spot up long enough to lease the space out.

I certainly not here to point fingers but I do find this odd to happen so quickly. We will be getting this opened tomorrow.

Tom, Looking forward to your findings.  I hope it's an easy fix.

It is always a challenge to find out the source of something like this.  Sometimes it is a lack of caulking around the base of the tube upstairs.

Tom, there may have been some cover up - or prior incidence!

Well, that would certainly be disturbing.  The last thing you want to see when moving into a new place is black growth.  Blech.

Tom, I had this same issue when I moved into my home 13 years ago.   The moisture  appeared in my living room, and NO water directly above.   A nail in the Master bedroom pipe from 7 years prior when it was built was the culprit.

This is definitely a cause for concern for all involved. My guess is someone tried to cover up the discoloration with paint and it is reappeared. My other guess is that occupants upstairs might have accidently spilled gallons of coke soda...I heard the drink can be pretty nasty and perhaps that is the result when it seeps through wood and drywall? 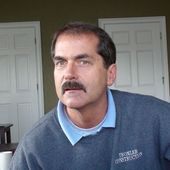