Last week I attended Keith Stonehouse's Realtor and Mortgage Masterminds seminar titled "100 Listings in 6 Months with Justin Ford of Jeff Glover & Associates at Aubrees in Northville".  Justin Ford shared strategies for obtaining listings and taking your career to the next level, all-in-all a pretty good career pep talk.  He mentioned something that got me thinking, and it was simply "...why are you doing this?".

At first blush, to make money.  However that is not entirely true, comfortably paying my bills is a pretty neat byproduct of working hard.  I've also had some real tough times in this business wondering how I was going to pay my bills (circa 2010), so avoiding that desperate feeling is also a pretty good motivator.

I mentioned in my prior blog post that I started this business when I was 19-years old while I was attending Oakland University.  What I did not mention is that for the next eight years, I worked full time as a residential real estate appraiser while taking 8-12 credit hours per semester...four semesters a year.  I would work all day taking classes at night, and finishing my work projects till the wee hours of the morning.  Wake up do it all over again.  I finished my degree, and in the eight years I attended school I went from being a teenager, to living on my own, running a department, starting my own firm, employing 15 people, getting married, and buying a house.  The day I officially graduated my wife was 6-months pregnant with our first child.

I never woke up in the morning and said "Let's get up to make money.". Instead I had this love of building something from nothing, but most importantly accomplishing things I was told I could not do.  But here is the funny part about that, I was the one telling myself I could not do it.  I am rarely in competition with anyone else, most of the time I am only competing with myself.

Soon after the birth of my daughter, the shift started in my motivation for waking up everyday.  I stopped thinking about building something, but rather keeping my commitments to the people that follow me.  I became increasingly worried about letting down my wife and daughter, my employees, and myself.  It really stopped being fun at this point; it became a job.  I was making money, more than I needed and I started buying like I was making money...mortgages, car payments, vacations.

My wife gave birth to our son in 2006 and our other son in 2008.  By this time the shift had taken me down. I was having anxiety attacks at the worry of letting down the people around me and instead of building, I was protecting the fragile house of cards I built. By 2010 when the economy flattened, a new shift was happening in my life.  Most of the business I had built crumbled to pieces and I was in the process of reinventing myself all over again.

I started meditating back in 2008 after the anxiety attacks put me to the ground, and started a process of being more mindful of the moment.  This new mindfulness I was practicing taught me a few things:

Today's vision is to set professional and personal goals that allow me to enjoy the journey and keep happy and mindful of the present moment.

Brian: I like your vision for today! It is easy to get caught up in "chasing the shiny thing" and not finding that balance that gives us peace and joy in life. 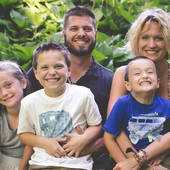