Neil Barofsky has written a riveting book on the 2008-09
government financial bailout which he oversaw as the Special Inspector General for TARP -- the Troubled Asset Relief Program (see, if you name it something like that, with the word “Relief” in it, everyone gets on board because it sounds like you’re making something broken whole again).  As he attempted to take down the Princes of Wall Street, he appeared to underestimate their power. And the $700 billion bailout did little to repair the damage that had been done by the banks and Wall Street. An Inside Account of How Washington Abandoned Main Street While Rescuing Wall Street is a must read.  Just don’t be surprised that certain government officials who promised to make things better were in bed with the bad guys.
So, what has this to do with mortgage rates and the 2015
market?  Just that whenever the government has anything to do with any program, you can count on it never turning out the way you’d expected.
I hear everyday how the “market is better, the market is stronger, houses are selling over asking, and mortgage rates are too good not to buy!” There’s some truth in that,  but once you look deeper, we still have problems.  Before you can talk about mortgages you have to look at the economy in general. While the economy is stronger than it was 1-3 years ago, we’re still facing some serious obstacles to a stable economy:
• Russia/Ukraine
• Israel/Gaza
• ISSA
• Heath care
• Affordable housing
• U.S. eroding educational system
My mortgage gurus are telling me what I already knew --- you can’t predict where mortgage rates will be in 2015 without knowing what 2015 will look like.  But, we can say this: homeowners have gotten far more savvy when it comes to pricing their homes, and it’s showing in the percentage of list to sold prices.  Towns like Franklin Lakes, Wyckoff, Ridgewood, and especially Saddle River are starting to see those numbers in the 89-95% range again. As has always been true, if you price a home realistically, it will sell quickly and for more money.
P.S.: This should be an interesting week because bailout leaders will be in court explaining why they took over AIG --- was it a way to bail out the banks through AIG rather than direct government intervention? Stay tuned. 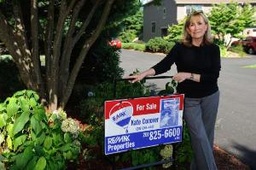 Real Estate Best Practices over 7 years ago
bookmark_borderbookmark
How Many #1 Realtors Can There Be?
View more Recent Posts   arrow_forwards