I hosted an open house in Scarborough the other week with Jaime Williams (one of our team’s buyer agents). The home was a beautifully redone cape with all the trimmings; completely updated kitchen with new granite counters, cabinets, and appliances, new wood floors, carpeting and tile, fresh paint on all the walls, the works! This move in ready home perched nicely at the end of a cul-de-sac. Neighbors were out walking their dogs and the fall foliage only added to the charm of this great cape. We had also just done a price reduction on the house, down from $339,900 to $334,000 so we were expecting a good turnout.

View Our Listing at 12 Bunker Hill Terrace - Now Under Contract!

12 Bunker Hill Terrace - What a beauty!

We were also anticipating a lot of the same feedback we’ve received over the duration of the listing thus far. “This is a great home, but I could NEVER live so close to the highway!” or “I couldn’t bear to hear that noise, day in and day out!”

Full disclosure: According to a Google Maps Distance Calculator, the home is .103 miles away from the highway, as the crow flies. This was the second time I had hosted an open house at this listing. Both times I made a point of stopping to see if I could notice the noise. Yes, there was a discernable whirring as I heard the trucks zoom south on 295. Was it any worse than the noise of people stopping and accelerating at stop signs? No. Could it be mistaken for strong gusts of wind rustling the trees? Yes. Have I lived in places that were louder? Absolutely! I have outlined them below. 0.11 miles from the highway as the crow flies.

Did these noises bother me? Of course, at first. But I adjusted. Things that would seem unbearable quickly became unnoticable. I was able to sleep through the crickets, bar patrons, and street cleaners after a few short weeks of adjustment. A highway buffered by acres of forests and other houses? That sounds like a piece of cake!

However, up to this point it seemed like I was a part of the minority in this noise debate. The stigma of owning a home close to the highway seemed to be preventing any serious interest from the available buyer pool in Scarborough. However, the price reduction(and copious amounts of online and paper advertising) convinced quite a few people to stop by our open house that Sunday. One of those groups of people fell in love with the house and decided that the highway wasn’t a big issue for them.  We can happily say that we are now under contract!  Highway? What highway? 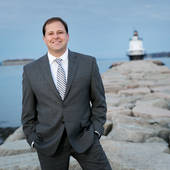