SeaWorld San Diego Sets Dates to Release Shamu and other
Killer Whales and Dolphins Back to the Pacific Ocean?

"SeaWorld San Diego announced the official dates of the
release of almost 2 dozen marine creatures back to their
natural habitat... in the ocean...the public will view them
there in our new "whale watching tours".

No this has not happened yet but it is not far off and if SeaWorld
and the ownership are smart it will happen sooner rather than later.

I live about 6 blocks from SeaWorld San Diego and drive past it
on my way to and from the house about 2-3 times a day. The
amusement park, kids attraction has always been a shining star
for San Diego until a documentary called "Blackfish documentary"
showcased a dark 40 year history on the treatment of the animals.

I had no idea what "Blackfish documentary" was until I started
seeing protesters outside SeaWorld with picket signs. The first thing
that struck me was that the protesters were almost all kids. There
were some parents mingling around and talking to each other but
the active participants where the kids. That is when I knew SeaWorld
was done - when their "fan base" of kids were the people revolting.

The first thing I thought to myself was "how do you attack and fight
the kids"? You don't. Basically SeaWorld started launching commercials
showcasing animal workers who say "SeaWorld" helped launch their
career in marine biology etc...BUT SeaWorld has launched 10x more
people protesting from what they see and the kids are leading the revolt.

This has been going on and growing over 6 months and as more and more
people are being turned out to the treatment and conditions of the animals
the more the momentum is pushing to release these animals back
to the wild.  The protesters and movement keep building outside
your front door each weekend and this is not going away and the
longer SeaWorld delays to act the worse it is going to get.

When this all went down and the protests started as a business person I
thought "Wow this is a major attack on the star bread winner of a huge
multi million dollar attraction and revenue raiser for hotels etc....
"HOW CAN SEAWORLD TURN THIS INTO A WINNER
AND CHANGE THEIR BUSINESS MODEL"?

I drove home that day without an answer although my subconscious
mind put it in the list of challenges huge corporate executive have to
face and I knew that releasing the animals was the only option.

When it is the kids leading the march you know that you are on
limited time before "boycotts" begin. As an example I do sell attraction
tickets and hotel reservations on some of my beach sites and I wanted
to reduce any support for SeaWorld and keep myself away from this
mess until a resolution is made and they set dates to release the animals.

In my personal opinion SeaWorld is really close to getting many local
businesses to start shying away from public promotion like myself
when I know some of the parents out front and their kids. When kids
ask you to help it is like Kryptonite for adults - almost impossible to
say "no" to.

So HOW DOES SEAWORLD TURN THIS INTO A WIN - WIN?

They change the business model and promote the heck out of being
"GREEN and ECONOMICALLY AWARE AND FRIENDLY ATTRACTION"
I know that sounds nuts but listen to my plan:-)!

1. Set a "WE ARE RELEASING SHAMU PARTY" set it for 12-15 months
down the road since we all know these animals cannot just jump
back in the ocean. Showcase the "training Shamu to go back" classes
and see if you can section off some space on Mission Bay to move the
animals to for preparing them to go back into the ocean so they have
an hour or two a day in a larger body of water and something
you can showcase to public for massive PR.

Once the release date is set you will have a massive buildup of
fans who "want to see Shamu before he leaves" and the numbers
would be record breaking and the goodwill that would reign in the
hearts of all parents would be "good job SeaWorld", now I can go
there with a clean consciounse and not try to answer the
questions the kids ask "Why are their protesters outside SeaWorld"?.

I know the main question SeaWorld has is "How do we replace
Shamu - our breadwinner and income source"?

This question is one that took a little thought however as an entreprenuer
and local it was easy - start adding "Whale Watching Tours from SeaWorld
to GO SEE SHAMU IN THE  WILD AT SEA JUST LIKE YOU WANTED
ON OUR NEW WHALE WATCHING TOURS!-)!!!!!!!!!

Why Does This Work for SeaWorld?
1. San Diego is the HOME OF WHALE WATCHING AND WHALE MIGRATION
and the Whale Watching Tours are AWESOME - check out one I went on a
year ago - it was amazing!!!!!!!!!!! - SeaWorld also has tours and things for
people to see in Florida and they would have to be equally creative.

Whale Watching Tours Can Save SeaWorld

2. SeaWorld is right next do the boat docks where
Whale Watching Tours leave from Mission Bay.
They could easily shuttle passengers onto their
new "SeaWorld San Diego Whale Watching Boats"
and then upsell them food and other items and even
VIP boat trips etc... Basically you can STILL SELL
WHALES AND SHAMU - JUST IN THE WILD like
the San Diego Wild Animal Park does it.
(Better yet sub contract one the dozen companies
aleady doing it and paint your boats like
Shamu just like SouthWestern Airlines".

You could sell "Whale Watching Tours" as a whole
seperate revenue stream from the docks and
from the attraction park.

Get some "DUCK boats" and do on and off water
tours just like they do at Wisconsin Dells - launch
from SeaWorld.

SeaWorld could offer some awesome whale watching
trips and tours and normally dolphins and other marine
animals appear. The trip I went on with "HornBlower Cruises"
provided educational teachers from San Diego History Museum
for kids and it was an awesome, relaxing and fun way to spend
3 hours off shore of San Diego checking out Gray Whales.

SeaWorld would need to add some more attractions and a few
more rides and perhaps a massive aquarium to also bring
in revenue and interest but they can do it - they are SeaWorld.

Now they just have to show the public they are the SeaWorld
of 2014 with a bit of a conscious mind for the animals and
not the old school "Barnum and Bailey's" SeaWorld where
it is "all about the money" and the heck with the animals.

That may have worked back then but it is a dead business
model now and one SeaWorld must embrace and change fast.

I KNOW SEAWORLD IS TERRIFIED BY WHAT IS GOING ON
BUT THERE IS NO CHOICE - IT IS THE KIDS PROTESTING -
YOU MUST CHANGE YOUR BUSINESS MODEL ASAP.

I know it is terrifying and scary but YOU CAN DO IT SeaWorld - parents
like us with kids will support you and you will always be an
awesome attraction with the other 99 things you have for parents
and kids. Please step up and move forward on this and set a
release date for the animals and give yourself 18 months to replace
the revenue with whale watching tours, duck tours, a few more rides,
an aquarium, theater of the movie "Shamu goes home" etc... you get
the point.

I can't wait until I see the headlines -
"SEAWORLD SAN DIEGO SETS DATES FOR RELEASE OF SHAMU" and stop
seeing kids ruin their Saturdays protesting out front to make this happen. 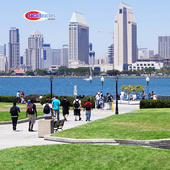