Today's Blog is an excerpt from notes of a presentation delivered while employed as a Special Interest Speaker on a Royal Caribean Repositioning Cruise from Australia to Hawaii.

So far on this  cruise we have discussed numerous topics on how to quieten your mind, find The Way, be in the NOW - meditate and relax.

Today we are going to change that energy - and get AWAKENED - WOUND UP and ENERGIZED to create a VISION for your future.

I store a host of successful VISION - versions in my life time. From a young child envisioning life in Canada as a 'Hippie' - my sister later on realizing this vision in the early 70's as we 'Hitch Hiked' across the nation,  to recognizing my VISION as an award winning hair stylist,  and eventually opening Winnipeg’s first esthetics school.

But those were just MINI visions, as I was warming up my imagination. Over the years, I have modified and edified my VISION process to include sketches, white boards, black boards, journals, scraps of paper, index cards and sticky notes. All stating things I WANT, NEED or DESIRE – and the ways or means for manifestation.

In January 2001 I decided to simplify the New Years Resolution fiascos – which usually resulted in mounds of guilt and feelings of impending doom and failure by January 3rd……
SO  a friend and I decided to choose a SINGLE word for the year, much simpler than having to remember a whole resolution – or so we thought at the time.

My word was NOW and I got busy right NOW transcribing NOW onto random pages in my journal, nail polishing NOW onto my toothbrush, hairbrush, and pretty much any disposable tool found in my bathroom. A few days later, while brushing my teeth I made the miraculous discovery that NOW when turned upside down, covered in dripping toothpaste and reflecting back to you from a mirror can actually spell WON!

I knew I was onto something, and wiping the toothpaste onto my towel, I grabbed my journal and started writing. Dear Diary, on January 4th, 2001 my reflection has just told me that I have already WON this year!!! Yes, I am a WINNER – and it’s gonna be a great YEAR!!

What else could I manifest? A bigger house, a car, monks to visit … enlightenment?

Owning #90 River Road became a reality for me in 2003, 5 years after first seeing the magnificence of the structure designed by Etienne Gaboury, one of Canada’s elite architects, and asking the universe, “What would it be like to live in a house that is a piece of art?”

My red car manifested – along with a son-in-law for a mechanic, and we hosted 10 Tibetan Monks who came to Winnipeg, - the center of North America to create a sand mandala as part of their cleansing of the energy trapped at ground zero in New York City.

Next came CBC, programs,  Jazz fundraisers, woman’s circles, board room meetings, international travel and Slate Communications rose in success. I had found the SECRET and it was inside of me, inside of you, inside of all of us. 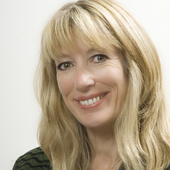