Why Do I Consider Myself a Democrat?

Our country has become increasingly polarized politically, and amidst all the commotion, I’m only a few short months from marrying someone that, at one point, found himself on the opposite side of the aisle from where I sit (pun intended).  Having never dated a conservative before, I made the choice, to put into words, why I am a Democrat.  How did I get here?  What has happened in my life, that has shaped my values and how did I equate those with my political views?   How does my journey differ from that of my partners’?

Our impending nuptials have implored me to take a hard look at my political views, and force me to learn how to communicate and co-exist with someone that has a different school of thought. When this conversation started, my fiancé would have said he was a 'fiscal conservative'.  Our first date was days prior to the 2012 US presidential election, so political views were a dominant topic throughout the evening.  I remember walking away thinking there's no way this is going to happen.  I called my dad (my beloved advisor) and asked him if he could ever marry a Republican.  He said “Oh yes, of course.”  With those few words, I took a deep breath, had a cigarette and said yes to a second date with Bob.

In the last two years, Bob and I have had some very tough conversations about political views.  Topics have ranged from the economy, compassion for our fellow citizens, social programs, our government, privilege, educational opportunity, racism, sexism, what it means to be an American citizen, and what we envision for our children and the generations to follow.  What we have both realized, more than ever, is the idea that our political views are often shaped by our moral views, and for me personally, one cannot exist without the other.  With that said, I believe we have learned to respect and understand each other's views a bit better, once we understood how they came about.

Getting to this point has had its fair set of challenges.  Admittedly, trying to understand a conservative point of view will never be easy. I grew up as an adopted Asian American in Seattle, from a household that consists of a single mom and a gay dad.  For me, being a democrat is a way of life as my father has dedicated his career to the public education system and provided me the support and motivation to fulfill my dreams.  I equate being a democrat with my moral beliefs and it has given me the compassion to understand that not everyone can pull themselves up by the bootstraps and make something of themselves, without some guidance and support from the community.  As I write this down on paper, I wonder to myself ‘how could I not be a liberal?’  And if that’s the case, what kind of journey or lifestyle would make someone conservative?

Some might be thinking 'well, if you work hard enough like I did, self-sufficiency and prosperity will happen.' Here's what society fails to understand, and what I have grown to realize over the years, having a dad in the public sector all of his life: Not everyone has the same DNA, or the same doors opening for them, and it's possible we are overlooking constraints that many people face every day.  As Bob and I discuss ideals like this, Bob would say it has given him more compassion and empathy for our fellow citizens, which in turn, has given Bob a different perspective.

While discussing topics such as education, social welfare, community assistance, and taxpayers dollars, for example, it's important to clarify that I do not believe we have a perfect social welfare system.  We also don't have a perfect governing body for crooks in big businesses. Nothing is perfect, but we can strive to make it better and also understand that giving up on it isn't the answer; that voting against everything our government/states tries to do for our fellow citizens, is not the answer either.  I make this point because Bob and I both agree that we have imperfect systems, and once we got that out of the way, we were able to discuss things more productively.  We both came into this with preconceived notions about the ‘other side’, but walked away with a more open mind.

There are many topics, ideals, and arguments to be made, but for context, and to provide the framework for my viewpoint, I truly believe I am a Democrat, not as a political definition of the word, but more a doctrine that continues to shape me as a human being, and guides my beliefs. I think this is important to communicate because this is what broke down a lot of barriers between Bob and me, when discussing our political beliefs.

For example, while discussing our social welfare system with Bob, I became acutely aware of the frustration social conservatives have with people who take advantage of social assistance our government provides.

With that said, there are people who cheat the system. But that exists in every system, not just our social system. There are also many people who make their dreams come true and benefit from the help of our system. My dad has a program at his college, where the foundation offers the resources to pay for the first year of college tuition at no cost to incoming first-year students from high risk neighborhoods. Not everyone takes advantage of the opportunity, and a large percentage of them quit after a year, but it's the ones that work hard to advance and succeed, that make it all worth it, according to my dad. He would say that “After that first year, if they are committed, we will find a way to help them graduate.” The way he recognizes the challenges for some, is another reason why I consider myself a Democrat.   I know his heart smiles (and probably cries) when he sees students succeed and graduate into their career.

These students provide an example of the success that can be developed in a system that provides assistance and support to others in need.  This allowed Bob to understand why I believe we need social programs, education grants, better pay for our teachers, etc.  It isn’t because I believe in socialism or free handouts, it’s because I believe that there are people who can succeed in a perfectly imperfect system.

Another example came about as Bob and I were discussing our childhood, and the experiences that have shaped our outlook as adults. I experienced adversity early on in life.  I recall kids being cruel about being adopted, in elementary school, and it had a lasting impact into adolescence. Luckily, I eventually come to terms with who I was and what I stand for, but I would say it was progressive and took many years.  Bob and I both came to the conclusion that when you are young, it is hard to empathize with other cultures outside your own. In a way, you grow up believing everyone is like you; that everyone has an opportunity and it's up to them to seize it. I couldn't disagree more, and facing adversity only helped me realize this at a younger age.

Bob remembers playing an innocent game called 'smear the queer' in elementary school. I believe my exact reaction was “How did you not know what that word meant by 5th grade?” And he rebutted with “I had no concept of that...there was no recognition of that term at that age.” This is an example of our experiences, and their ability to shape who we are today.  I believe if you grow up with a lack of diversity in your sphere, it's hard to relate to another person that demands or is entitled to that kind of understanding.

When you grow up defending and sharing the diversity in your life, you open yourself up to learn from other peoples’ journey and hardship. It's at these pivotal moments when you realize the world is harsh, it's incredibly unequal, and each person has a different story to tell.   Bob and I have taken these opportunities to turn into each other, instead of allowing them to divide us.  When we take the time to understand each other’s POV, it’s amazing how responsive and forbearing we can become.

When Bob and I first started our journey together, I found he more or less believed being a Democrat meant believing in free handouts to everyone, or the government should take over our lives, or that I believe in socialism. It's not because I believe we should take someone's wealth and spread it around. And I also don't hug trees in my spare time. ;)

If you asked Bob today what being a Democrat or Liberal means to him, he would have a very different response for you.  He would probably say I am a Democrat because I believe in a greater good among the earth we walk on, a human race that has compassion and empowers one another. He would add that I believe in our world being a better place, if we can uplift and support everyone; not just the wealthy or the privileged.

As a Democrat, I believe that as a more intelligent, joyous, self-loving, compassionate, educated, strong, and a more accountable population, we wouldn't have a lot of the problems and inequalities we have today. It's because I believe that to enjoy the freedoms we have in this country, it also means we each contribute into a reciprocal system. For me, being a democrat is more like a religion and I continue to practice and support my democratic faith.

So if you're asking me if I believe a fiscal conservative, like Bob cannot believe in the greater good for the people, the answer is no.  I'm just saying this is where I stand as a Democrat.

As Bob and I have tackled a lot of preconceived notions, and what we thought being a Democrat or Republican meant, we have come to agree that we need a higher level of thinking, a deeper level of compassion, and we are just a petri dish of what we hope for amongst our fellow citizens, political leaders, teachers, professors, college presidents, CEO’s, and everyone else that has the obligation of leading our country.  If we can look past the labeling of what we think we are, and start to understand what is important, I believe we will be better off as a nation.

I now ask you, what has shaped your beliefs? What were you exposed to, young or old, that has impacted your political stance?  Do you and your partner share conflicting views, and how do you co-exist?

I co-exist with ultra liberals to ultra conservatives for the greater good. I think for the most part we all want a better world to live in, but just have different opinions on how to achieve that.

Erin, you're pretty brave to put yourself out there these days, with most people's perspective being extreme and unwilling to listen, or consider any opposing viewpoint.  No wonder your spousal relationship has thrived.  Best wishes to you and Bob! 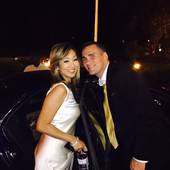