Appealing layout, specific market location identified by City and State, along with useful information designed to attract buyers and sellers to you is what the Group City & State: Listings and Market Reports is all about. Nice job. 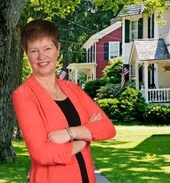