One of the things I absolutely love about living in Franklin TN is its rich history.  Franklin was founded in 1799 and very few people actually know that one of the worst battles in the Civil War was fought here.  As a result, you will find several historic exhibits here.  Carnton Plantation is Franklin's most famous historic place.

Carnton Plantation was built in 1815 by former 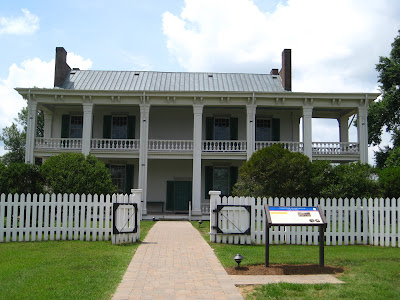 Nashville mayor Randal McGavock.  At the time, Carnton became one of the premier farms in Williamson County, Tennessee. John McGavock inherited the farm upon his father's death. John married Carrie Elizabeth Winder in 1848 and they had five children, three of whom died at an early age. The surviving children were son, Winder, and daughter, Hattie.

On November 30, 1864, during the Battle of Franklin, Carnton Plantation was used as a field hospital for hundreds of wounded and dying Confederate troops.  The Battle of Franklin has become known as one of the bloodiest battles of the entire Civil War.  The Confederate Army of Tennessee assaulted the Federal army in the late hours of the night along the southern edge of Franklin.  The battle only lasted about 5 hours but nearly 10,000 soldiers were either killed, missing or wounded.  Of that number, 7,000 were Confederate soldiers.  They filled Carnton with the bodies of the wounded.  After the house could no longer accomodate any more injured, the yard was used for the wounded and the dead.  The floors of the Carnton Plantation are still stained with the blood of those that were wounded that night.

Two years later, John and Carrie McGavock designated two acres to be used as the final burial place for 1,491 Confederate soldiers.  The cemetery was maintained by the McGavocks until their death.  Today, the McGavock Confederate Cemetery is the largest privately owned military cemetery in the United States. 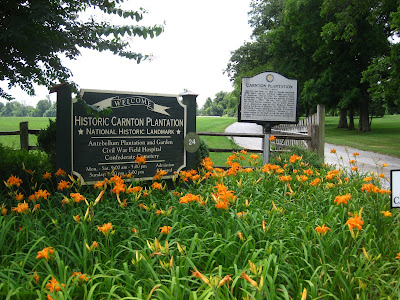 amily until 1911 when it was sold by Winder McGavock's widow, Susie.  Carnton was listed on the National Register of Historic Places in 1973.  In 1977, the house and 10 acres, including the cemetery, were donated to the Carnton Association.  The house was suffering from years of neglect and disrepair.

The Association was a vital part in the restoration of Carnton Plantation.  It continues to maintain the plantation through tours, special events, such as weddings, summer concert series and corporate events, memberships, gift shop sales and generous donations.

If you are a history buff and would like to read a fictional account of the events that took place at the Carnton Plantation, read Robert Hick's New York Times best selling book, The Widow of the South.

Groups:
Things to Do/Places to Visit

Good morning Tammie. The Carton Plantation has a lot of history behind it. I do attend several of the fund-raising events. If you like to read, ' The Widow of the South' is a good read about the plantation and the Battle of Franklin. The Battle of Franklin was the only night battle of the Civil War.

Good morning Tammie. Love reading the history about places like you have described, but seeing them in person a whole lot better.

Hi tammie,   What a last to a very special time and place in the past. I hated to reach the end of your story.

Tammie, the Carnton Plantation does look like a great place to put on a list to visit!  Lots of history!

I immediately thought it would be lovely for a wedding. :) Glad to see it is used fully by the community for a variety of purposes.  It's important to preserve rich cultural history - and the Carnton Plantation looks as if it would be a place worthy of a visit.

Tammie, I want to commend you on writing such an awesome post on Carnton Plantation. This is so educational. I am glad this is a historical place and it was restored.  I had no idea "The Battle of Franklin has become known as one of the bloodiest battles of the entire Civil War."  All the more reason for it to be a historical place and restore it.

Micheal - I have already read the book. Although, it is a fictional account surrounding the battle, it was very enjoyable.

Joe - We have several places in town worth visiting.

Belinda - It's an interesting story.

Debb - We have been to a wedding at Carnton and will attend another this summer.

Kathleen - I'm not sure many even know of this battle. It only lasted five hours but had devastating consequences for the Confederate Army.

Tammie White I love Historic Homes and learning about the history behind them . The Carnton Plantation is a place full of American history

A Beautiful Piece of History Tammie. So glad they kept it and restored it and it continues to shine.

Too many of these oldies are being knocked down in our area and I just hate to see it.