The full Snow Moon rises in  February . Usually, the deepest snows fall this month. Here in Rhode Island The time was 6:10 PM

We are covered in deep snow, Monday we received 30 inches and forecast for more snow coming tomorrow.

Usually the heaviest snows fall in February. Hunting becomes very difficult, and hence to some Native American tribes this was the Hunger Moon.

Since the heaviest snow usually falls during this month, native tribes of the north and east most often called February’s full Moon the Full Snow.r Moon, since harsh weather conditions in their areas made hunting very difficult.

This name has been passed down and this year I think that most people living in the US would agree it is an appropriate name as we have had so much snow in February.

Hello Kathleen ... interesting post and VB did see the "Snow Moon" and your post has been featured to the group: 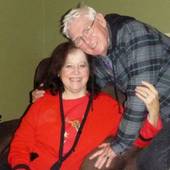