I learned of Coach Smith's passing at church on Sunday morning.I immediately thought of my Dad,to say he was a FAN of Dean Smith is an understatement at best.My Dad admired Coach Smith most assuredly for his success on the basketball court but more importantly for the way he impacted lives beyond the court.One of Coach Smiths remarkable giftes was to have 90% of his players graduate from college.Let's take a minute to look at his on court accomplisments:

-Coached US mens olympic team to a Gold Medal in 1976

Off the court Dean Smith was also known for his stance on civil rights,he helped intergrate a Chapel Hill restaurant,known throughout his life for his humanitarian work for those less fortunate.He recruited Charlie Scott in 1966 as the 1st black schlorship player to UNC. In 2013 he recieved the Presidental Medal of Freedom...No small feat.

Dean Smith was a servant leader before that term became popular.My admiration started because of my Dads, later it was because of the "way" he lived his life.Character and integrity were main stays of his life,in an enviroment that did NOT always measure success by these metrics.Many of his players looked at him as a 2nd father most notably Michael Jordan.I think Coach K but it well "We have lost a man who can not be replaced,he was one of a kind and the sport of basketball has lost one of it's true pillars today!

Dad you and Dean Smith shared many traits...I wrote this recap today as a salute to both you and Coach Smith...Well Done Gentlemen,thanks for making ALL of us want to be a little.Thanks for doing it YOUR WAY!! Rick Gibbs @HomesBUYRickGibbs,Realtor,Glen Allen Va. 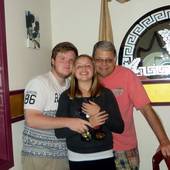