Think about the top five people you’re spending time with... Are they successful? Committed to their craft? Do they get motivated when they need to? If this sounds like the people you’ve surrounded yourself with, chances are good that you’re going to be pretty successful yourself.

On the other hand, if those five people aren’t working towards anything, quit when the going gets tough, and have poor daily habits, you probably do the same things.

I have a friend who drank heavily for 22 years. Eventually, he got to the point where he needed a to quit or face permanent liver damage. When he reached that point, he decided it was time to quit. But amazingly, some of his friends weren’t supportive. They would offer him drinks and try to convince him to start drinking again. Thankfully, he resisted, but those friends were no help at all.

Fortunately, we get to choose the people we spend time with. For example, in the early days, when I had first started my brokerage, one of the men I was working with called me and asked if we could talk. We met in person, and he told me that he wanted to take a break from real estate. As I questioned him, I realized that this “break” was actually a subtle way of quitting. So I responded with, “Wow, man, you were doing so well. I was really relating to you, we were getting along really well, and I was enjoying my time with you. We were kickin’ butt and making some cash in the process. You were on a path to really growing your business, and I thought you’d become a leader in our company. And now you want to quit. It’s really sad.”

Harsh, right? Well, I was probably a little harder on him than I should have been, but it was really important to me to make sure I was surrounded by successful, like-minded people. After all, one of the pillars of my system is knowing that there’s only one way to turn a loser into a winner. It has nothing to do with giving them money and opportunity. It’s all about changing the way they think.

That was a tough conversation, but there was an important principle I needed to pass on. If you spend time with people who are willing to give up when they get tired, or when things get tough, their attitude will influence you. Having courage means loving yourself enough to say, “I will not let my goals be hindered by people who aren’t willing to work to achieve theirs.”

It’s possible that my former agent did have a good reason for taking a break–maybe he wanted more time to strengthen his relationship with his wife. If so, that’s wonderful. But we need to remember: we can’t achieve our goals if we’re constantly falling back on excuses.

Take a few minutes to think. Are you letting excuses stop you from achieving your goals? If so, it’s time to reconnect with your reason for pursuing that cause in the first place.

Welcome, albert pita to the Rain train! I'm glad you made the brave first steps into the blogging world with us! It's a great place to be and I hope to see many more posts from you in the future!

Thank you my friend! I am looking forward to it.

Thank you ! One thing is certain, you are who you associate with.

I am very happy to be apart of such a wonderful, and thriving community of real estate professionals.

Keep blogging! ActiveRain members are very active and provide a platform to share knowledge and experience to help you become better!

There is an old saying, "If you surround yourself with nine millionaires, you will be the tenth one soon"  !

Albert Pita, I too was a newbie less than a month ago.  Keep up the good work.  Blogging is better than ranting and it still makes you feel so good!!

Surround yourself around positive people.

Welcome to Activerain Albert.  It's a positive group to surround yourself with, and there are great resources here.

Thank you everyone ! I am seeing what an amazing group of people i have in this community ! have a great day everyone.

Welcome to ActiveRain! Congrats on your first blog in the Rain! Keep up the good work! I hope you have a great 2015! 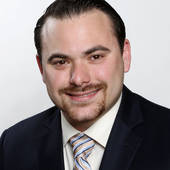