Update: The Library Over The River

We’re starting to see some real progress on the Renton Library over Cedar River this Friday, the first day of Spring 2015. 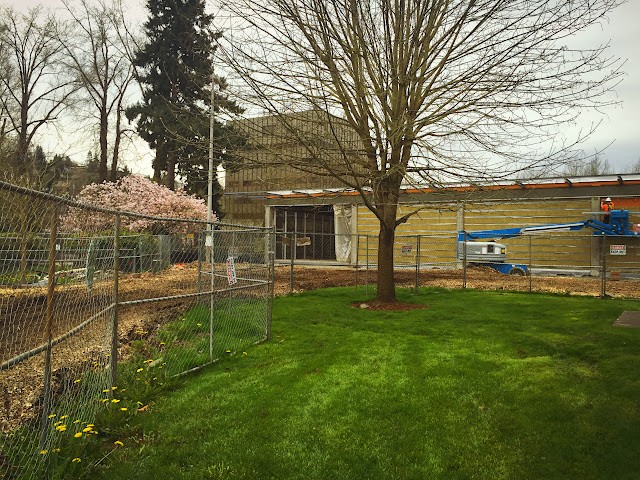 The new roof is up and sheathing curtains cover the outside walls. The new wall is nearing finishing touches on the north side of the building. This is a major remodel with all high energy-efficient systems. I’m looking forward to opening day. If they schedule stays on time it will be finished and open this summer. 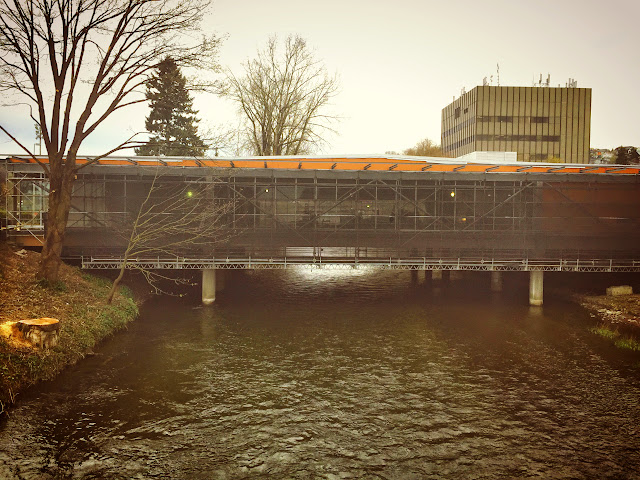 I’ve posted about the downtown Renton library a few times over the past couple of years and because I did I got to talk to David Johnston of Johnston Campanella and Company, Architects of Renton. They designed and built it back in 1964.

David was then 91 and living in Sequim, Washington. He called me one Saturday afternoon in 2012 because he found my blogs about the library online when he was Googling for info about the library (now part of the King County Library System) being moved. He told me this was one of his favorite projects. The Johnston Campanella version of the library opened in 1964. The new library will look quite different for sure, but I’m glad it will sit on the same pillars over the river connected to Liberty Park. Following is a conceptual drawing of the new library courtesy of the Renton Reporter.

Previous posts about the Renton Library... The Library over the River.

The Library Over the River

The Library over the River, revisited.

A Story of Connection

The Library That Neva Got Built

Hi Rene - I read a previous post you wrote about the library, and I'm glad the restoration is going well. It's really special when a unique building like this can be saved.

René - I remember one of your previous posts.  This just shows the power of localism in blogging.

Getting new public buildings competed especially those that offer good services to the resident is always exciting.  And they can watch the casting in the stream below

Good evening Rene Fabre ,  Putting the library over the Cedar River is quite a unique plan.  Thanks for sharing your photos.

What a beauty, and how serene it will be hanging out and reading with a view like that.  Happy Sunday, A

Great post and terrific information. Have a fantastic day ahead.

Hi Ed Silva ! It is a treat to watch the river from above. You can see the trout!

Hi Larry Johnston ! You are welcome! It's the only library  over a river in the USA.

Hi Ron & Alexandra Seigel ! Thanks A... I especially love the fact that it's directly adjacent to the Liberty Park.

Hi David Saks ! Thanks! I will!

What a great building this will be when finished.  It is fun to watch a project as it developes.  Much more so, in my opinion, than just seeing it up and finished since the last time being there.  Mark

Agreed Mark Don McInnes, Sandpoint ... Though I loved the old one, this will be a wonderful new building and it sits on the pillars of the former library. Me too, I love watching the buildings going up. Looking forward to a walk in Sandpoint when I come over!

You will enjoy the new building and still have the great memories of the over the river library. I remember going to the library when I was about 6 years old and then it was an often destination.