Out the garage door and in to snowflakes, abrupt u-turn in my power chair to collect my golf umbrella.

First 100 yards foot paths are clear - almost. Just how much snow can fall in the next half mile to the Elementary School for my volunteer appointment in the Read Today program?

A crossing Guard waves me over as I try to shed snow from my umbrella, forget about the rest of me that looks like a Christmas scene without the lights.

School yard totally white, but I can follow the tiny footprints. Major shaking job once in the foyer. My machine had attracted snow all over, my bag at the front was full of it (zip had stopped working long ago).

I might say that my classes provided respite from stress. Not entirely so. There was the interruption of the earthquake drill. My "duck and cover" was against an interior wall with a large book on my head. Must have been the longest, loudest "earthquake" I have ever been through. Here is me, emergency trained, with my green helmet, vest, and pack still at home.

Out the door again. Nature had enjoyed my respite by continuing to unleash snow, and it continued. Was I on the ramp? Somewhere were the steps - what steps? Snow, excessively white snow! Where is the path to the school gate? Just aim for the opening and hope I remembered the turns.

On the roads - I had to use the roadway as the footpaths were mostly unpredictable - it looked like no car had ever been there. How deep? My chair's front wheels were covered; the footplate where I carry my bag was acting as a mini snow plow. Speed down to a creep. Only traffic slushed across the front of me. " Hey, I'm on a pedestrian crossing..."

Around one more corner and I'm home, but the snow is deeper. and progress is faltering. Time for a full speed push. Oops, missed the driveway. Back up, forward and home at last.

Wife ensuring that no snow entered the garage by brooming me down from hat to wheels. Adrenaline subsiding, exhaustion taking over... Snow continued, but I was not part of it Another Utah adventure over.

Sure to be a great day in Paradise tomorrow.

Groups:
Almost Anything Goes
POSITIVE ATTITUDE for the Weary Soul
The Optimist
"Whacked"!!!

Very interesting post Larry O'Sullivan.  You truly live in Paradise... Few places can match the natural scenary in Utah but I feel bad the winter still isn't over.  Growing up in Canada, I can feel your pain and frustration but hope tomorrow's a better day for you.

Shuchi - thanks for your encouragement. This is one of the few times that the magnificent Utah scenery has not been visible. As an Australian living in Utah, I tend to enjoy the challenges of snow, but today this is "after the event". Our previous snow was in December, so we had been lulled into a false sense of security. Coats and gloves went away two months ago...

Larry, nature has met its match when competing against you! Enjoy your day!

Funny in a way, Larry - Yup! but, not as much fun when 'after the event,.' However,  you did great, Larry. Proud of you!! Utah needs a man like you with your fight and spirit.

Larry how close are you to Kanabe? Utah is so beautiful from all the people I heard...and the pictures I have seen...for me it is still on the bucket list, Endre

From Sunny Florida, there is plenty of land down here. It looks like you see the Sunny side in your neck of the woods. Wishing you a joyful day

LOL! What an awesome read! You should blog more!!! Thanks for the follow!

Joni - currently in between the land of good intentions and life gets in the way. and I think incident to age gets mixed up as well. Lately I have been blessed with an increase in strength on a daily basis. The fire for blogging is back within me. 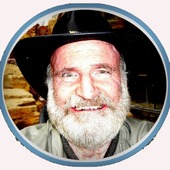