The start of the Leg to Lisbon, Portugal On the way to Lisbon To say this was everything I expected is an understatement. We had fun from the word go. Sailing people for the most part are very friendly and love to share their knowledge and experiences. There is so much to sailing that I do not know.

For those of you who are not that familiar with the race I will give you a little background. The Volvo Ocean is a yacht race that is held every 3 years and races across the globe with different ports of call. This race started in 1973 and was known as the Whitbread Round the World Race for its sponsor a British brewing company; this name was held until 2001 when Volvo took over the sponsorship.

The race usually starts in Europe and has several legs with several stops. There are also in-port races in these cities. This year’s race started in Alicante Spain on October 11, 2014 it takes about 9 months to complete the race. Some of the teams take 4 or 5 months and then start preparation for the next race.

This race is not for the faint at heart during the 2005-2006 saw a sailor loose his life as he was thrown overboard efforts to revive him failed.

Each of the yachts has a sailing team which consists of professional sailors who race day and night for more than 20 days at a time on some of the legs. They also have a shore crew who travels with them and I got to meet some of the shore crew but that will be a different blog.

I hope you enjoy these pictures as much as I did taking them!

Groups:
Great Shots!
Things to Do/Places to Visit
EXPRESS WITH PHOTOGRAPHS AT ACTIVERAIN
Photos
Travelers In The Rain

I posted pics today also but told everyone yours are much better than mine. good pics and it is a good idea to explain the race to all who do not know.

These are lovely sailboats, and so delighted you enjoyed the race.  We are happy to be home before heading off again.  A

Hi Yolanda, I would like to watch this race and love sailing - albeit in calm manner. One of the best vacations ever was on a small sailing boat in the Bahamas. They put us all to work.

Thanks for sharing your travels and your photographs.

You should be leading tour groups!

Great photos!  You guys have too much fun :)  Keep it up!

I like the third photo with the bridge, the boats, and the helicoptor.  Lots going on in that scene!

Looks like a fun time. I am glad you enjoyed it!

Yolanda, you managed to capture some wonderful pictures.   I have always been awe of the people and the equipment that do this race.

Yolanda, Thank you for sharing the photos. Have a good day.

Yolanda, what a fun trip. Love all the colorful sails. I can't imagine being in this race and on the water for 5+ months.

Yolanda, you have experienced so many cool things -- this would be tops on the list!

Good evening Yolanda. I love sailboats. I used to own some and the company I once worked for owned some. They are a blast.

Hi Yolanda Cordova-Gilbert ,  I can just imagine the sore muscles after a trip like that.  Thanks for taking the photos.

YO~These photos are superb!! And I loved reading about this race. I used to sail competitively long ago with a beau who took it very seriously. Sailing is HARD. But, the sounds, the feeling of the wind, the quiet, the ability to read how to move the boat by changing the sails (sometimes at breakneck speed) is certainly exhilarating!

Thank you for posting this in Travelers in the Rain!

Gayle Rich-Boxman Fishhawk Lake Realtor (503)755-2905 Thanks so much for featuring me in Travlers in the Rain! I sooo appreciate it! 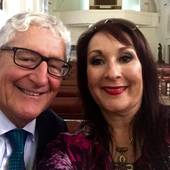